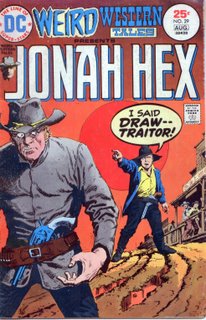 There is no way that I can do this story justice, but I will try. If you are a Hex fan, you have to get a copy of this, either on ebay or in the Showcase Presents. It is that good, the artwork and layouts are that rich, the story is that pivotal in the Jonah Hex saga. I understand it will also be retold in the upcoming 3 parter in the new Jonah Hex series. But, I'm getting the cart before the horse. Let's get to the story.

The story starts with Jonah riding into Red Rock Texas, 1875. As Jonah dismounts a young man calls Jonah a Judas & a traitor and starts yelling at Hex about Fort Charlotte. He says that his dad died because of Jonah being a traitor. Jonah turns and walks away, leading his horse, but the young draws his pistol and fires. He misses Hex, but hits the bit on the horse's bridle. The bullet ricochets away but the horse, spooked, rears up and accidentally kicks Jonah in the head. 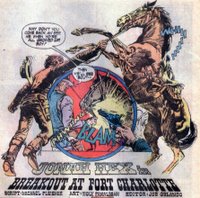 The doc comes rushing out and gets Jonah into his office. There, Jonah starts crying out in a delirium and the story goes into a flashback.
Richmond, Virginia, Christmas Day, 1861. Jonah, unscarred, and his best friend Jeb ride up in front of a large plantation. The black butler calls for Mr. Turnbull to come out because Jeb Turnbull & Jonah are home. Jeb explains that he & Jonah are on a three day pass. They are welcomed into the home & they present Mr. Turnbull with a present, the Eagle-topped cane that we have seen previously.

Jeb mentions that they took it off a Union General.


During dinner there is a discussion about how well the war is going. Jeb, full of bravado, exclaims that within three months, the Confederacy will have won its freedom. Jonah expresses doubts because it seems that for every Yankee he shoots, six more seem to pop up. Just then, one of Mr. Turnbull's men comes in, shouting that some of the slaves have gotten loose and started an uprising by setting the barn on fire. They all rush outside to see some of the hired hands and some loyal slaves shooting into the mob, trying to calm the riot. Suddenly one of the slaves rushes up behind Jonah, wielding a large club. Jeb shouts a warning & Jonah turns and shoots the slave dead.
Jeb shouts, "YAHOO! You got im, Jonah boy! Good shot!" Jonah appears remorseful at having killed the man and mumbles a short thanks. Mr Turnbull orders his son to forget about Jonah and to "get those rebellious darkies back to their sheds so we can resume our Christmas dinner".

The next day, Mr. Turnbull personally takes it upon himself to flog the leaders of the uprising. Jonah comments that maybe the slaves had been whipped enough, but Turnbull says that slaves are like children, requiring beating to understand their master's love for them. A day or so later, Jonah & Jeb are back on the front lines, fighting the Yankees.

January 1st, 1863, the Emancipation Proclamation takes effect. Even though it was written on Sept 22nd of '62, this story shows Lincoln reading it on Jan 1 '63.

An undisclosed time later, Jonah & Jeb are talking over the campfire. Jonah explains that he can't continue to kill Yankees while they are fighting for men to be free, but he can't turn & fight against his friends. His only solution is to turn himself in to the Union & sit the war out in prison. 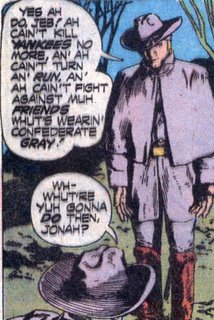 That night, Jonah appears in the bedroom of the commander of the nearby Fort Charlotte. The Commander thinks that the fort has been overtaken, but Jonah explains that he is surrendering to the top man at the fort. The commander questions Jonah as to the location of his unit, but Jonah explains that he alone is surrendering & will not divulge that information.

The commander calls for his orderly, a black soldier, & berates him for allowing Jonah to get into the bedroom. He tells the orderly tha Jonah can have free reign of the stockade area. Jonah, mentally notes that it seems like the black man has no real home in the North or the South. Later, the orderly comes in and explains that he found red clay on the hooves of Jonah's horse. That may lead them to where Jonah's platoon is camped. The commander orders that a platoon be sent out to check a nearby marsh.

That morning, Jonah's entire platoon is captured in their bedrolls and not one shot is fired. As they are being taken to Fort Charlotte, some of the men are already blaming Hex, calling him a "sneaky, nigger-lovin'..." before being threatened by Jeb. once they are all in the fort, the commander has Jonah brought out and publically thanks him for turning traitor on his friends. Jonah punches the commander, but the damage is done, his friends believe he has turned them in. Jonah is then locked in solitary confinement.

While in solitary confinement, Jonah locates a loose board that leads to a tunnel. The jailer brings Jonah's ration of bread & water, notices the loose board and then warns the captain. The captain is overjoyed because the fort doesn't have enough supplies to feed their own soldiers, much less dozens of prisoners. The captain orders gatlin guns placed around the perimeter, ready for a breakout.

Jonah climbs down the tunnel into the prisoner barracks. He hands out some guns he stole 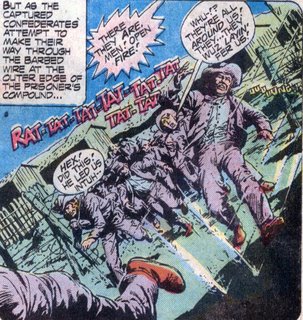 along with wire cutters, however only a few men of the thrity five escaping are able to escape alive. Jeb dies in Jonah's arms, begging to know if Jonah is guilty of the betrayal.
Jonah later hunts down the captain and kills him in revenge. Two weeks later when the news reaches Quentin Turnbull, he swears vengence upon Jonah for the death of Jeb.

The flashback ends as Jonah awakens. Jonah asks the doctor about the young man that shot at him. The doctor tells him that the young man is still waiting across the street. Jonah walks out and asks the man if he's ready for a showdown. The young man quickly pulls his gun and guns Jonah down before Hex can get a shot off. The doctor runs out & pronounces Jonah dead. The young man, having avenged his dad, rides slowly off. Once he is gone, Jonah gets up. The doc says that Jonah took an awful chance, letting the boy take a shot, but Jonah replies that a kid that wet behind the ears couldn't hit the broad side of a barn. He then rides off as well.

Statistics for this issue
Men killed by Jonah - 2; Jonah shoots the captain and we see Jonah shoot a man in battle.
Running Total - 84
Jonah's Injuries - Kicked in the head by a horse and punched in the face.
Timeline - 1875 for the opening & closing and 1862-63 for the flashback. This is the beginning of some of the stickier points in Jonah's timeline. 1875 was a dumping ground for Michael Fleisher and it seemed that later on, when the Jonah Hex stories started having a continung storyline the 1875 stories that were told earlier were not shoehorned in. This was a western comic & people weren't paying attention to it. The errors, starting with issue #30, just kept coming.

Like I said earlier, this is probably one of the best & most pivotal stories in the Hex legend. Quentin Turnbull was a driving force in Jonah's life and that would come to a climax in the next issue.

Some wondeful art in this issue. Panaligan really makes it seem cinematic with the switching camera angles and all.

I agree Brandon, sticking to the cinematic theme, there were many "shots" as far as placement and angle that I'm sure I've never yet seen in any film. If I were a director looking for some new ideas (especially since camera-mounting drones have gotten so cheap, I've see the overhead shot pioneered by Kubrick in "The Shining" in every second B-movie I watch it seems) I would look to 1970s comics, especially the Filipino artists DC started to use, they would offer a rich harvest as far as unique and groundbreaking shots I'm sure.