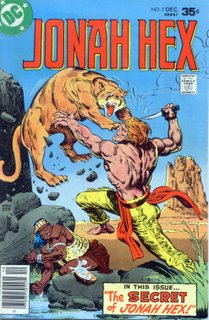 Since Jonah Hex #13 (vol2) is 'retelling' the origin of Jonah Hex, I thought I would present the first pre Superboy Prime Super Punch Retcon version (or as I like to call it "fpSPSPRv"). But first a little back story. In Jonah Hex #2, Jonah is framed for a murder and is then considered a wanted man. Other events between 2 and 6 indicate that this story takes place after WWT #30 and would place this either in 1875 or after (I will have to do more extensive research concerning time of year inidcators in those stories to see if it happens AFTER 1875).

The story opens in Hennessy, Texas with a cowboy starting to manhandle a saloon girl. At a nearby table, a gentleman in a fine suit stands and asks his table mate to excuse him. The other man refers to the gentleman as "your lordship." The gentleman interveens on behalf of the saloon girl, but teh cowboy turns and punches the man. As the man picks himself up, he tells the cowboy that he accepts the challenge to the duel. The friend of the gentleman produces a case with two sabers. When the cowboy starts to draw his pistol, the gentleman spins arouns and knocks the gun from the cowboy's hand. The cowboy takes the offered saber and the duel starts in the saloon.

The cowboy is quickly disarmed and the gentleman says that he will show compassion & not kill the cowboy. As the man turns to leave, the cowboy grabs at a gun on the bar. The gentleman sees him in a mirror and turns, throwing the sabre through the cowboy's heart. 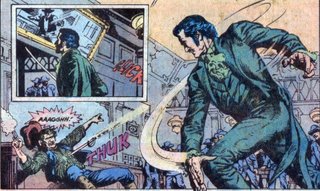 The sheriff storms in, demanding to know what is going on. the gentleman introduces himself as Count Henri D'Aubergnon, recently from France, here in the States to hunt the most dangerous of game, man, and the most dangerous man, Jonah Hex, a wanted outlaw.

Meanwhile, on the far outskirts of town, Jonah is talking to an elderly man, Mr. Vanden, who has hired Jonah to rescue his daughter that was kidnapped by the Apaches. Vanden asks how well does Hex know the Apaches, but Jonah doesn't answer & rides off to find the young lady.

We are treatd to a flashback stating it starts "more than twenty years, 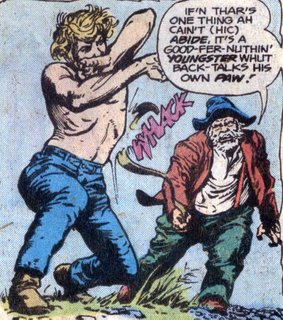 to a fateful day in July, 1851. Jonah Hex was then thirteen years old." Jonah is loading a wagon with moonshine as his father sits under a tree drinking. His father, Woodson (we learn his name at another time), is an obvious alcoholic, slaps Jonah and beats him with a belt. Once the wagon is loaded and they are on their way, Woodson explains that he is gonna trade the moonshine for a few squaws and a grubstake for the California gold rush. (Ginny, Jonah's mom, left her husband just over three years prior in 1848).

At the Apache camp, the Indians give Woodson a stack of pelts in trade for the moonshine and another stack of pelts in exchange for Jonah. Jonah is flabbergasted and starts crying as his dad gets on the wagon to leave. Woodson tells Jonah that he would be better off with the Indians instead of a drunken lush like his old man. Jonah fights off two Indians holding him back and runs to his dad who slaps him down and tosses off a slim promise of coming back to get Jonah once a fortune has been made. Jonah turns to fight off the Indians but is subdued and spends the next two years as their slave. 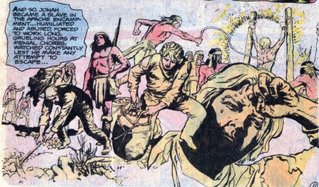 Then one day (1853) as the chief is at a river, a large puma attacks the aging chief. A nearby brave is unable to shoot the puma for fear of hitting the chief when suddenly, Jonah leaps forward with a knife and kills the puma on the spot. The chief is so grateful that he declares that Jonah Hex is now considered a brother to the chief's son and is due all honor of a true Apache. Jonah learns to ride, hunt and fight better than anyone, even the chief's son, Noh-Tante. White Fawn, a lovely girl, even takes a liking to him. Noh-Tante cannot hide his hatred & jealousy.

Later, (A YEAR later, we learn in issue #8. 1854) when both boys turn 16, they are sent on a mission to steal the finest horses from some nearby Kiowas. That night, as Jonah & Noh-Tante sneak into the camp, Jonah kills a Kiowa guard/. Noh-Tante releases all of the ponies and then shouts a war cry to alert the Kiowas. He kicks Jonah into a rock, knocking him out & leaves him for the Kiowas. back at the Apache camp, Noh-Tante tells the chief that he saw Jonah killed by the Kiowa.

Back at the Kiowa camp, Jonah awakens to find himself surrounded by Kiowas. TO BE CONTINUED!!

Statistics for this issue:
Men killed by Jonah: 1 Kiowa and one puma

Running Total - 134
Jonah's injuries: Slapped & beaten by his dad, struck on the head twice and knocked out.
Timeline: The opener is post 1875 (or post death of Turnbull in WWT #30) and the flashback takes place in 1851, 1853, and ends in 1854. This was one of the few times that we got to see Jonah's dad and he really is a filthy drunken sob. There isn't a lot of characterization on Jonah's part, we just are privvy to see the terrible childhood he had and the hardships he had to face. The five-page opening with the Count seems like a waste of space, but it does tie in with the previous issues and provides a nice framework for the flashback (the best part coming in issue #8). The cover does cause one to wonder if Hex's scar was caused by the puma attack, but no, we find out what happened next issue.

Next Issue: A rigged tomahawk fight, the Mark of the Demon, and (believe it or not) a two-headed coin.

I heard from someone that Elmore Leonard was once approached by DC in the late seventies to writesome paperback Hex novels. KNow anything about this? I've looked around the interweb, but I haven't turned up anything. I'd pay good money for something like that.