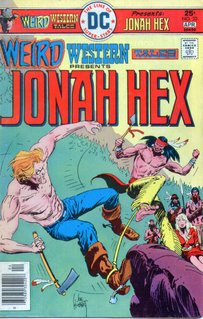 For starters, we get a Joe Kubert cover, the first of half a dozen that Joe did for WWT & Jonah Hex. Inside, the tale starts with where we left off, with Jonah being held at knifepoint. There is a quick recap and Jonah is tied to a large log. Jonah asks Bigfoot when did brave Paiutes start kidnapping women. Bigfoot explains that Haynes has been lacing the watering holes with strychnine to drive the Indians from their land. Bigfoot plans to use the ransom money to get guns and ammo to start a war against the whites. Jonah tells Bigfoot not to do it because he will do nothing but lose that war. Bigfoot then Indian Pimpslaps Jonah. For a warrior, Bigfoot is really into slapping people around. 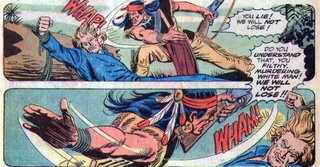 The next morning, Bigfoot instructs his men to tie Jonah to the nearest mound of flesh-eating ants. Jonah, not wanting to wait until he is taken to South America to die, decides to goad Bigfoot some more by calling him a mighty kidnapper of women. Bigfoot says that if Jonah wants to fight like a warrior, he will die like a warrior. Jonah accepts, figuring that anything is better than the anthill.

Each man is given a tomahawk and a 12 foot rope is tied to their right ankle, joining them together. Bigfoot demonstrates that by snapping his right leg, he can pull Jonah off balance to gain the advantage. The fight starts with Jonah unsuccessfully trying to pull Bigfoot over. 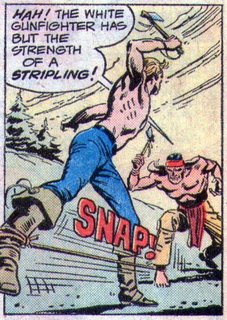 Bigfoot counters by yanking Jonah over but Jonah rolls away. While Bigfoot taunts him, Jonah jerks Bigfoot's leg out from under him and throws his tomahawk. Bigfoot rolls to the side, grabs the rope with his hand (a violation of the rules?), toppling Jonah and then readies to bury his tomahawk into Jonah's head. Only the shout of one of the Indians stops Bigfoot. The Indian shows that Jonah's tomahawk hit a rattlesnake that was about to strike, Jonah saved Bigfoot's life.

Jonah explains that he would get $5,000 for bringing Bigfoot in alive, he couldn't let the snake kill him. Jonah takes Debbie & gets on his horse. Bigfoot warns that his debt to Jonah is now paid & if he sees Jonah again, Jonah will die.

Jonah returns Debbie to Haynes and when Haynes inquires about Bigfoot, Debbie tells how Jonah saved the Indian's life. Jonah questions Haynes about the poison and he denies it. Jonah then rides off to bring Bigfoot in alive. Haynes sends some of his men to follow Jonah and when Jonah leads them to Bigfoot, kill Jonah & bring the Indian in alive. Then he'll let the men divvy up what he was going to pay Hex.

For three days and nights, Haynes men follow Jonah. On the fourth day, Jonah is looking down into a valley containing a cave. Haynes men ride up and threaten to kill Jonah, but he explains that they would never be able to get Bigfoot out of that cave. 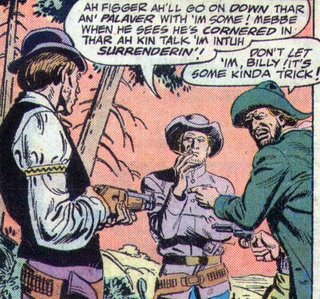 Jonah says that he might be able to talk Bigfoot into surrendering. Haynes men agree to the plan and let Jonah walk down to the cave, waving a white handkerchief. But they are planning on using some dynamite to kill Hex and Bigfoot both.

Hex makes it to the cave and Bigfoot comes out, threatening him. Jonah tries to explain the situation to him, how Haynes men are wanting to kill them all, but Bigfoot thinks it is a trick. Bigfoot posts his men as guards at the mouth of the cave and he and Jonah go deeper inside to talk. By this time, Haynes goons have gotten the dynamite ready and they light it and toss it in front of the cave. The explosion kills Bigfoot's men and seals the cave closed.

Inside, Bigfoot shows Jonah a back way out and they use it to sneak up behind Haynes men. Two of them draw on Jonah and Bigfoot but Jonah finishes them off. The other men quickly confess to poisoning the water holes at Haynes direction. Jonah ties them all up and then tries to take Bigfoot's rifle in order to take him back for kidnapping Hayne's daughter. 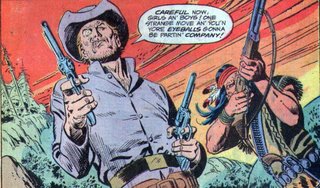 Bigfoot quickly knees Jonah in the gut & takes off running. Jonah grabs his pistol and fires several times, missing Bigfoot every time. In the last panel, two of Hayne's men, being led back to town by Hex, consider the possibility that Jonah let Bigfoot escape on purpose.

Statistics for this issue
Men killed by Jonah - 2
Running Total - 92
Jonah's Injuries - slapped twice & kneed in the gut
Timeline - Not a lot to go one here. Just a general Jonah Hex story.

This is a great multi-part Jonah Hex story, mostly because of the Lopez art. Sure seeing Jonah fight a bear and the tomahawk battle were great, but it was the Lopez art that keeps me flipping through the book again & again. I'd like to scan the whole thing and post all of it, but I have a life & it doesn't cost much to get a copy on ebay. The story had enough twists to warrant two issues even though the multipage recap ate up a lot of space.

And finally, because I completely forgot about Beefcake/Cheesecake week, I offer this: Beefcake & Cheesecake together. 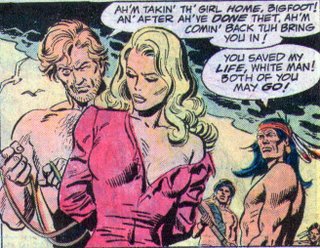 Next Week: A Dime Novelist, a competing bounty hunter, a noose for Jonah, and the Death of a Bounty Hunter!
Posted by Dwayne "the canoe guy" at 9:14 PM

Ummm...as much fun as you guys mayget from observing Debbie's torn bodice, it is COMPLETELY inaccurate. She should be wearing a chemise, corset, corset cover, bustle and about three petticoats as well as drawers. An average Victorian woman wore at least 30 POUNDS worth of underwear and clothing.

Sally, I give you at least 3 sweaty men with no shirts on in that pic and I end up with a lesson in vintage ladies undergarments. Sheesh.

What do you want from me? Wicker?

Yeah, but I LIKE the sweaty men with no shirts on!