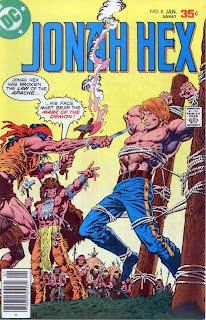 This story, continued from last issue, is stated as taking place "Spring, 1874". Ooookay, 1874 it is. (Mr. Fleisher, you're killing me here with your continuity). We are treated to a splash page stating that Jonah is tracking the Apaches that have kidnapped Adrian Vaden. Then we get a 1 page recap of the flashback and on page three we pick up when Jonah is captured by the Kiowas.

They tie him to a stake & get ready to burn him alive when suddenly the camp is attacked by white men who slaughter Indians for their scalps ($25 each at Fort Hastings). They kill everyone in the camp, including slitting the throats of two Kiowa children. When Jonah, whom they have just freed, protests, they gut shoot him & leave him for dead.

Several weeks later, Jonah awakens in the cabin of an old trapper. It is not revealed how the trapper found Jonah, but he nurses the boy back to health through the summer & fall & into winter. Jonah walks for three days to find the Apache camp, but it is deserted. Then we get a montage of Jonah as a "wanderer on the frontier", a buffalo hunter for the Army, a tracker, a scout, and then in the Civil War at Chancellorville (May 1863), Vicksburg (July 1863), Shiloh (April 1862), Antietam (Sept 1862). Therefore, the Fort Charlotte Massacre occured sometime after July of 1863.

After the war is over Jonah comes upon a wagon that has been destroyed. Looking through the ruins he finds Noh-Tante's medicine amulet. Within the week he finds the Apache village and meets White Fawn. She explains that she has wed Noh-Tante. Jonah confronts the chief and explains how he was betrayed by Noh-Tante "twelve years before" (so we are now in 1866). The chief declares that this arguement must be decided in a tomahawk fight.

During the battle Jonah accidentally hits a tree and the handle on his tomahawk breaks. Noh-Tante holds Jonah down and gloats that he had weakened the handle so that it would break. 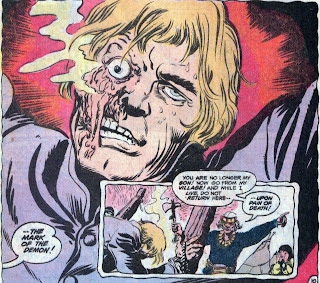 Jonah, about to die, grabs the knife he keeps in the collar of his coat & stabs Noh-Tante. Jonah has broken Apache law by using a weapon other than the tomahawk and he must pay a price. The chief explains that Jonah had saved his life once but then killed his son, so the world must know that Jonah is half good & half evil. They tie Jonah between two poles and press a heated tomahawk into the right side of his face. He is kicked out of the camp & told that he will be killed if he ever returns.

Back in present day (1874), Jonah locates the Apache village where Laura is being kept. An Indian attacks him from behind, knocking him unconscious. He awakens tied before the chief, his one-time 'father'. The chief explains that come dawn Jonah will be tortured and then burnt alive. Later that night, White Fawn stabs the brave guarding Jonah and then frees Hex. She is going to escape with Jonah but the chief kills her with an arrow in the back. Jonah shoots & kills the chief, grabs Laura and starts to escape.

As they ride away, they are ambushed by Count Henri D'Aubergnon & Pierre (remember them?). Now the Count knocks Jonah off his horse by bending a tree over, tying it down and cutting the rope, letting the tree spring back. looking at this tree I'm wondering that if the Count can bend a tree that big around, why didn't he just grab Jonah & break him in half and eat his organs? The count ties Jonah up and Pierre takes up collecting arrowheads. 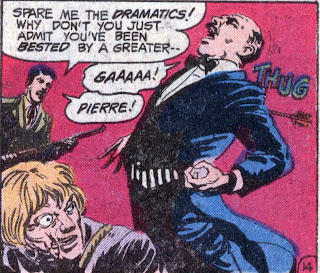 The Count frees Jonah and together they are able to fend off several waves of Apaches attacking. Jonah decides that one of them can save Laura if the other provides cover. The Count falsely states that he has enough ammo to last hours (he has two bullets). Jonah & he argue about who will stay & who will go. The Count suggests the toss of a coin. 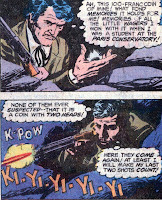 Heads, he will stay, tails, Jonah will stay. It comes up heads and Jonah rides off with Laura. The Count ends up fighting the Apache with just his saber.

As Laura & Jonah ride off, they have this exchange:
Laura:"Did you ever study French, Mr. Hex?"
Jonah:"Nope! Why?"
Laura:"Well, I was just thinking how funny it is that when we were leaving, the Count called out "adieu" to us. In French, that means 'farewell'.
Jonah: "So whut?"
Laura: "Well, when you're expecting to see someone again, you're supposed to say 'au revoir', which means 'until we meet again'."

And then we are treated to this visual: 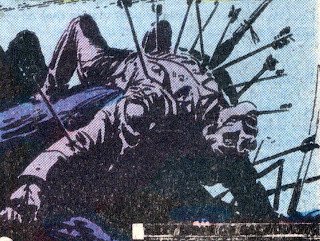 reminds me of a Jack Davis EC book.

Statistics for the issue
Men killed by Jonah : Noh-Tante, the chief, and at least 4 other Indians (6 total)

Overall this was a great issue. The art by Ernie Chan/Chua was good but Alcazar's inks weren't refined enough to make this stellar. Major awards go to the last panel. The cover has Jonah wearing Union Blue instead of Reb Grey.

Finally, one for Ragnell & SallyP 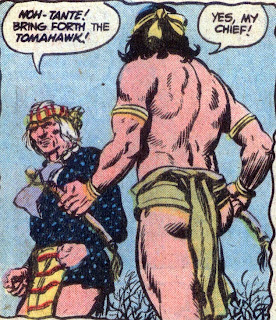 Next Issue: More exposing of sweaty man-flesh, a vast Mexican treasure, and an awkward moment....Not that there's anything wrong with that.

Oh you do know the way to a woman's heart...a REALLY nice butt shot. Tee hee!

I do love this issue, there is so MUCH action packed into it. Nowadays it would be a nine part mini-series.

I just remember the famous man who said "Can't we all just get a loin...cloth?"

I say the pun is the HIGHEST form of comedy.