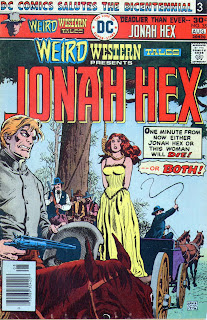 When we last left Jonah Hex, he was out in the desert having missed the opportunity to score a bounty. Now our story opens with Jonah literally crawling across the desert to a small water hole. He lowers his hat to get a drink but before he can raise the hat, it is riddled by gunfire with a shouted warning to stay away from the water. The man shouting the warning is Redeye Charlie, who appears to be an old prospector. He tells Jonah that the watering hole is poison and offers one of his canteens to Jonah. Jonah explains that the Yellow Mask Gang shot his horse & left him for dead in the desert. Charlie offers to take Jonah into town (Hill Valley, AZ) on one of his mules.

As they ride into town several hours later they happen upon what appears to be either a town picnic or a carnival. They are aghast to learn that the town has turned out for a hanging of a saloon girl that is accused of stealing $10 (about $140 today) from a cowboy. Charlie offers to pay the $10 to save her life. The sheriff refuses and Charlie starts to argue. Jonah tells Charlie to back off since the folks in the town have the right to do what they want. 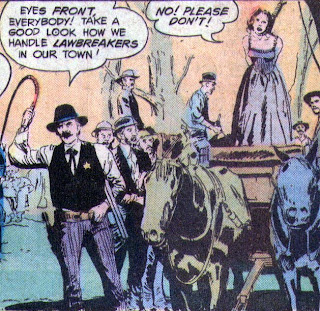 Charlie & Jonah ride on into town as the hanging proceeds and the saloon girl dies.

Jonah & Charlie part ways, Charlie heads to the livery to house his mules and Jonah goes to the saloon to get a steak. While Jonah is eating, the sheriff comes in & demands $20 from the owner. The owner states that it was only $10 last time, but the sheriff points out how much money everyone is making by the folks coming to town to see all the hangings. The owner pays up and once the sheriff is gone, he complains to Jonah about the price increase. Jonah asks why he pays it then. The owner explains that he makes more money on hanging days than on all the other days put together. There is a hanging about every 10 days or so and since the sheriff is also the judge everything moves really quickly.

Jonah tries to get a room at the hotel but learns that it is full...because of the hanging. they only have a few vacant rooms that they keep open in case any traveling ladies find themselves stranded for the night. Jonah decides to spend the night at the livery and finds that CHarlie has drunk himself into a stupor. Charlie says that he is heading for the hotel but Jonah explains that they only have rooms for ladies.

The next morning the local bank is robbed by the Yellow Mask Gang. They end up getting a gold shipment that was supposed to be a secret. As they make their getaway they shoot one of the managers of the bank but all the noise wakens Jonah over at the livery. 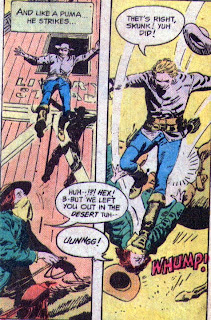 As they ride past, Jonah jumps out of the loft, kicking one of the riders square in the head. Jonah tells a bystander to take the dazed crook to the sheriff because he is heading out after the rest of them.

The sheriff takes custody of the robber & the bystander leaves. Once they are alone, the sheriff starts chewing out the robber for getting caught. He ends up letting the robber go and they will split up the loot later. Seems like the sheriff is the one telling the gang about the gold shipment. As the robber leaves, the sheriff shoots him in the back right in front of Charlie. Charlie threatens to tell the town what he knows but the sheriff goes into the cell and knockes Charlie out with the barrel of his gun. The sheriff pours a bunch of whiskey down Charlie's throat to fit in with a plan he has.

Anyway, Jonah is up on the roof, blocks the chimney and the cabin fills with smoke. One owlhoot comes out to see what the problem is & Jonah smacks him with a pistol. The other three come out and they make the mistake of drawing on Jonah. he dives to the ground and kills them all with three shots. He ends up taking the bodies and the one survivor back into town.

They arrive back in town to find a hanging almost in full swing (giggle, snort, 'full swing', I slay me. Har har, 'slay me', hee hee) but this time it's Charlie at the end of his rope (snort). The sheriff found a yellow mask in Charlie's bedroll, proving he is part of the gang. The horse Charlie is on is whipped and Charlie starts swinging but Jonah shoots the rope in two. Jonah helps Charlie up off the ground and Charlie tells the whole story about how the sheriff is in with the gang. The sheriff denies it but the owlhoot that Jonah brought in decides to rat out the sheriff when he learns that the sheriff killed is brother (who was captured by Jonah earlier). The owlhoot produces the gold shipment schedule, the very one in the banker's handwriting that he had given to the sheriff.

Folsk decide that they had gathered for a hanging so they might as well have one. As they are stringing up the sheriff, the banker offers the job of sheriff to Jonah. The pay is good but of course he would have to keep the hangings a comin' so the town will prosper. Hex and Charlie both ride off as the rope draws tight around the sheriff's throat. 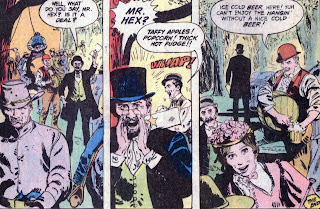 Statistics for this issue
Men killed by Jonah - 3 members of the Yellow Mask gang
Running Total - 94
Jonah's Injuries - none
Timeline - A nice 'done in one' that could take place anywhere during the bounty hunting years.

A good story with good supporting characters and a whole town that is corrupt, but not totally. they are just running their own version of the lottery. Moliterni's art is again, gritty, and great. The coloring is vastly improved and helps the story along, not like last issue. The cover is a little crowded with the "DC Comics salutes the bicentennial" banner.

Next Week: Jonah meets "Rawhide", attempted rape, and the return of Bigfoot.
Posted by Dwayne "the canoe guy" at 8:56 PM

Oh wow...I actually don't have this particular issue, so I MUST find it. An excellent review as always. Boy meeting quotas is always such a pain.