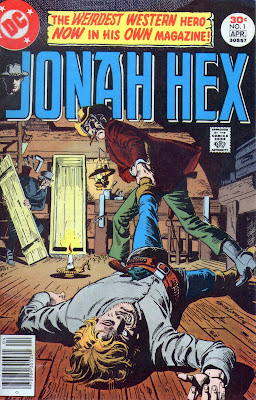 Jonah finally gets his own magazine and they start this one of right. The low point-of-view, the perspective of Jonah Hex being drug to a coffin, the Lopez art, this cover is a keeper.

Open the book and the splash page is gone!!! We start in Whalenburg, TN in the spring of 1874. Jonah is riding down toward a large plantation-looking home. As Jonah nears the gate a guard tells Jonah to drop his guns. Jonah tells the man that he has no fight with him but Jonah is suddenly lassoed and yanked off his horse. Four men start beating Jonah, punching him in the gut, kneeing him in the groin, kicking him in the head and then getting ready to bash his head with a rifle butt.

They are stopped by a man running from the house. The guards refer to him as "Doc" and he explains that Mr. Royden has sent for Jonah Hex to find Royden's son. As Doc takes Jonah into the house, he apologizes for the treatment Jonah received. Jonah tells him not to fret.

Jonah is led into the master bedroom where he sees Frederic Royden bedridden with his wife by his bedside. 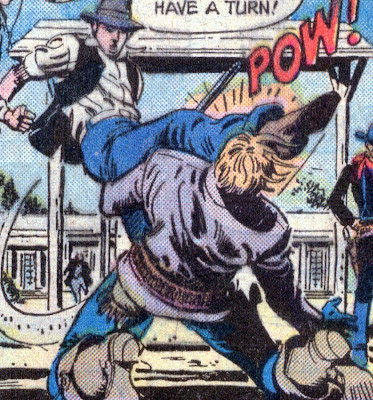 Royden verbally runs everyone out of his room so he can talk to Jonah. He tells Hex that his son was kidnapped six months ago and when the maid tried to stop the men, she was gunned down. The maid died before she could give a description of the two men that kidnapped Tommy. Royden explains that he is dying & will pay $20,000 to get his son back. Jonah asks why Royden has waited six months. Royden waited for a ransom note, but it never came, then they hired the sheriff, then Pinkertons, then other bounty hunters. Royden tells Jonah that Tommy is blonde with blue eyes & an odd scar on his left wrist. Jonah takes the job & leaves, heading west, figuring that the kidnappers would have a better time hiding out in the wilds.

Two weeks later in Rock Creek, Arkansas Jonah comes upon the Mange & LeClerc "boy-fighting" show. These two men have a group of boys that fight each other and the crowd will bet on the winner. I'm not sure if I fault Fleisher here for naming these two guys Blackie LeClerc & Charlie Mange or if I fault Lopez for drawing them to fit their names. LeClerc is tall, skinny, long hair parted in the middle, long skinny mustache, tall 10-gallon hat, vest, tie & black overcoat. Mange is shorter, blond, unshaven, wearing a Union coat and something that looks like a dwarf top hat. These guys just look evil and their names are a like a big neon sign that reads KIDNAPPERS!!!!!

Anyway, on to the story. Jonah watches as "bruiser" Donovan fights it out with Pablo Sanchez. The townfolk pony up their money and the fight starts with Pablo headbutting Donovan in the stomach. Donovan goes down & doesn't get up. A handy town doctor examines the boy & pronounces that he has a ruptured kidney and is about to die. LeClerc goes bonkers on Pablo for destroying some prime fighting stock and is about ready to literally whip the boy when Jonah shoots the whip in half and then punches LeClerc through a fence. LeClerc announces that he is going to draw on Hex but Mange stops him, pointing out that he is about to draw on Jonah Hex.

LeClerc shanges his tune, saying that he deserved the @$$ kicking he just got. Hex asks if either of them has seen a boy matching Tommy Royden's description. LeClerc & Mange deny it as well as almost all the boys. Jonah looks at Pablo directly & asks him, but Pablo, head hung low, denies it as well. Jonah lets them know that he'll be in town for a few days if they do see Tommy.

That night, Pablo climbs in to Jonah's second floor hotel room & tries to wake him. Jonah, of course, is not in the bed, but sitting on a chair in the shadows. Pablo tells Jonah that the injured boy is really Tommy Royden, even though Donovan had brown hair. Pablo says he will take Jonah to Tommy & prove it. As they are walking through the darkened town, Pablo explains that LeClerc & Mange mostly use orphans or runaways but sometimes they have to resort to kidnapping to replace boys who die in the fights. LeClerc & Mange have told all the boys that if they try to escape, they will hunt them down & kill them.

Finally Pablo & Jonah get to their destination & Pablo starts to climb in the back window of the building. Jonah notices that it isn't the doctor's office. Pablo tells him it is the undertaker's, Tommy died earlier that afternoon. By candlelight Jonah & Pablo examine the body and find not only has Tommy's hair been dyed but they find the scar on his wrist as well.

Just then LeClerc & Mange speak up from the shadows. They had followed Pablo to the hotel & now here. Pablo pleads with them not to whip him. LeClerc assures Pablo that he won't be whipped. LeClerc then shoots both Pablo & Jonah. Pablo falls dead, but Jonah only receives a graze on his skull, rendering him unconscious. Mange suggests shooting Hex again, but LeClerc has "A better idea". They take Hex's guns and nail him shut inside a coffin and then leave town.

Hours later Jonah wakes up and notes that the air is getting thin. He is able to pull his knife from the back of his shirt and starts to use it to pry the coffin lid up. The knife breaks! Jonah notes that he liked that knife & he'll have to make LeClerc & Mange buy him a new one. The lid has been loosened though and Jonah manages to kick his way to freedom.

Several hours later & several miles from town, the kidnappers are sitting around a small campfire drinking coffee. Mange asks LeClerc if he heard anything in the woods. Jonah steps from the shadows, announcing what they heard was him & he wants to have a friendly little chat. The kidnappers observe that Hex has the drop on them, bt what is he gonna do? Jonah states that he is gonna kill whoever is responsible for kidnapping Tommy Royden.

LeClerc says that fine with him because Mange did it. Astonished, Mange starts telling Hex how the whole thing was LeClerc's idea. Jonah sees that there is a slight disagreement so there is only one way to decide this .... a fistfight ... on the edge of a cliff.

With Jonah sitting calmly on a nearby rock holding them at gunpoint, he tells the kidnappers that whoever survives the fight must be the innocent one and Jonah will let them go scott free. LeClerc & Mange tear into each other savagely but in their struggle they roll too close to the edge of the cliff and They both topple over. Mange, screaming, plunges headfirst into the canyon below. Leclerc is able to grab onto the edge of the cliff and starts begging Hex for help.

Jonah walks over to the edge and tells LeClerc not to yell so much, Jonah is thinking about Tommy Royden and "thet nice Mexican boy you killed. Whut wuz his name again?" LeClerc starts trying to deal with Hex, he tells him he will cut Jonah in on the business, they'll be partners, Jonah will get 75%. Jonah asks how much did the boys get? LeClerc chastises Jonah for getting all "sanctified" and starts ranting about how the boys are better off in the fighting troup, how they have a chance instead of being on their own, how they.... 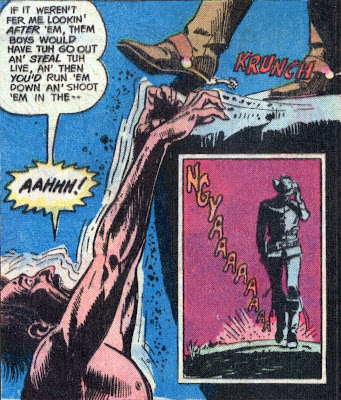 The story ends with Jonah arriving back at the plantation in Tennessee leading a a horse carrying Tommy's coffin. The rain is pouring down as Jonah unloads the coffin in the front yard. Doc comes out & tells Hex that Mr. Royden died last week. Mrs. Royden comes out, sees the coffin, screams and falls weeping on it. The last two panels are great as Doc tries to pay Jonah what is due him, but Jonah silently gets on his horse and leaves.

This is an interesting take on a man who would take money from women and children in the past and often was seen as more motivated by profit than anything else. Here he is still bloodthirsty in dealing with the kidnappers, but appears almost embarrassed at not being able to save an innocent.

Statistics for this issue:

Men killed by Hex: 1 (or should we count Mange's death as well?)
Running Total - 110
Jonah's Injuries: Beaten and a bullet graze to the skull
Timeline: 1874, another early Hex tale.

Comparing this to the "remake" in Jonah Hex #1 Vol 2, it's hard to say which story rises above the other. Vol 2 has Hex dousing the kidnapper with blood in order to be mauled by his own fighting dogs and it goes one step further in Jonah actually killing the young boy to save him from rabies. This story however shows Jonah killing LeClerc and a few panels later appearing to mourn the loss of Tommy. Either way, this is a fine story to start off Jonah's own magazine. My only complaint, voiced earlier, is the almost cartoonish names and faces of LeClerc & Mange.

NEXT WEEK: Those damn government agents and a trip to Mexico.

And because I'm not above pandering to the ladies, I offer this.
Posted by Dwayne "the canoe guy" at 4:59 PM

Oh Dwayne, you know I enjoy it when you pander. Rroowwll!

Er...ahem. VERY nice review. I love the whole idea of Hex making the two baddies fight it out between them, the winner being declared "innocent". This is a very medieval perspective by the way. The whole kicking the bad guy off the cliff was great.

I guess I'm too bloodthirsty, but it is so nice to see a bad guy get their comeuppance.