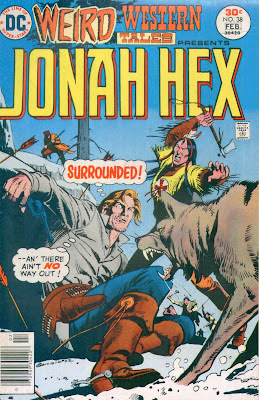 This is the last story of Jonah Hex in WWT, issue 39 started Scalphunter & they decided to go out with a bang. Any story done by Lopez gets an immediate thumbs up & I'll tell why later.

To start off, Jonah doesn't appear until page 6 in this story (I'm not counting the waste-of-space splash page). Instead we are treated to a full page of a white wolf in the snow-covered Wyoming mountains attacking & eating sheep. None of this goes unnoticed. One man in a group of four sees the wolf & attempts a shot. However, he is berated by his companions because they are out in the wild on more nefarious business. They are there to ambush Banker Haskins.

They rob him of the mortgage receipts from Josh Morgan. It is revealed that the men are led by none other than Morgan himself. Is plan is to steal back the money & keep his ranch. They kill Haskins and then claw up the body with a wolve's paw to make it appear that he was killed by the white wolf.

Several days later the saloon is packed with a meeting of the Eastern Wyoming Sheepman's Association. Josh Morgan is heading the meeting & is talking about getting rid of the White Wolf since it has been killing sheep & then the banker. One of Morgan's thugs speaks up, saying that he saw it happen. Morgan states that he has taken action to capture the wolf, he has hired Jonah Hex. The scene cuts to Hex up in the mountains in the middle of a blizzard pondering the fact that Morgan wouldn't let Hex examine the banker's body. He hunkers down for the night, making camp.

The next morning, Jonah wakes up, feeling a strange sense of apprehension. Suddenly an arrow slams into a tree next to him. 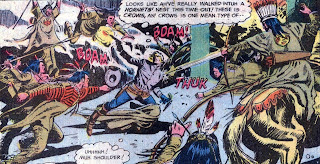 Suddenly he is attacked by a large group of Crow Indians. Jonah kills one before he gets an arrow in the left shoulder. He shoots down three more, takes a arrow in the right calf. Kills a fifth Indian and runs out of bullets when the wolf appears out of nowhere, attacking the Indians. Gunfire erupts from the ridge above them and a mountain man drives off the rest of the Indians.

With the Indians gone, the rescuer climbs down to Jonah & it becomes apparent that the wolf is his pet. The man, Bearclaw Jackson takes Hex back to his cabin. Several hours later Jonah wakes up. Bearclaw has taken the arrow out of Jonah's leg, but the arrow in his shoulder won't budge. Bearclaw breaks off the fletching and cuts a groove in the shaft. He fills that with gunpowder. He lights the gunpowder to cauterize the wound and then using the butt of a pistol, Bearclaw hammers the arrow the rest of the way through Jonah's shoulder. 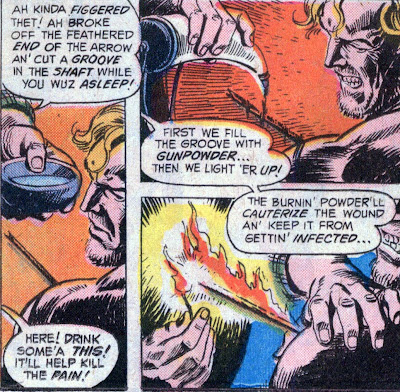 Jonah suffers in bed for three more days, fighting a fever & blood loss. On the fourth day He gets ready to leave and Bearclaw asks Jonah what he is doing up in the mountains. Jonah explains that he was hired to capture the wolf, but now he can't do that since Bearclaw saved him. Bearclaw snarls about the stupid sheepers and how the wolf has to eat sheep every once in a while. Jonah explains that a man died because of the wolf. Bearclaw opens a chest and pulls out a Navy telescope. He details how a week or so ago he saw four men kill another man that was in a surrey.

Jonah asks if Bearclaw could tell who did the killing, but Bearclaw says that the telescope is not that good of quality. Jonah tells Bearclaw to put a rope on the wolf, they are all going to town. 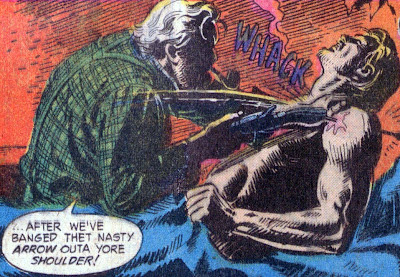 Bearclaw refuses and Jonah tells him to come along.... or else. Or else what? Or else Jonah will lay the smackdown. Hex & Bearclaw trade blows until Jonah finally topples Bearclaw with a two-fisted punch. Bearclaw agrees and they load up & head into town.

As Jonah, Bearclaw & the wolf ride into town, folks from all over empty out into the streets. Morgan meets them in the street, demanding an explanation. Jonah states that Bearclaw witnessed the murder of Haskins. Bearclaw points out one of Morgan's thugs. The thug panics & said it wasn't him, it was .... Morgan shouts at him to shut up and lifts his rifle to shoot Bearclaw. The wolf lunges at Morgan, killing him. A thug starts to shoot the wolf, but Bearclaw jumps in the way to save him. Bearclaw, lying in the street dying, tells the wolf to git. The wolf runs off and three of Morgan's thugs decide to draw on Jonah. The town population is quickly reduced by three.

Jonah goes over to Bearclaw, who's dying wish is to not die in town around the sheepers. Jonah takes Bearclaw back to his cabin. With the wolf howling outside, Bearclaw passes away. Jonah blows out the lantern in the cabin and rides off.

Statistics for the issue:
Men killed by Jonah: 8
Running Total - 109
Jonah's Injuries: Arrow in the left shoulder, arrow in the right calf.
Timeline: Not really sure, could have been any period. It does take place in Wyoming.

I have a soft spot for almost any story drawn by Lopez and this was a very good story. Jonah is worked over be a group of Indians and I liked the fact that it was Crow, instead of the normal Apache or Cheyenne, and their dress and headdresses were of a different style than the southwestern Indians. A nice detail in the art. The thing that Lopez does better than anyone else in the business is give us a sense of place. He draws a town scene and no matter what angle we see that town from, everything that was in the opening shot is where it is supposed to be. If you see a blacksmith next to livery in the first panel, 5 panels later when seen from another angle that livery is still next to the blacksmith. This consistency is what endears Lopez to my heart.

The character of Bearclaw could easily have been played by Brian Dennehey. His death at the end was depicted very well and I regreted that he couldn't live to be in another story later down the line.

Next Week: The end of the useless splash page, kidnapping, boy-fighting, and Hex gets fitted for a casket. All of this in Jonah Hex #1.
Posted by Dwayne "the canoe guy" at 7:02 AM

Very nice. I must find this one.

Interestingly, the way that Bearclaw removes the arrow from Jonah's shoulder, is exactly the way that it was done in the movie "Two Mules for Sister Sarah" with Clint Eastwood and Shirley Maclain. Excellent movie, if you've never seen it.

JUST read this in the NEW just-got-it DC Showcase JH v.2. Excellent summation, and much agreement about the artwork, which happily seems to go on through the next few issues of Jonahs own title.

I was excited to see Showcase #2 on the stands as well. Eventually we will have all of Jonah Showcased!