Jonah Hex #4 "The Day of the Chameleon!" 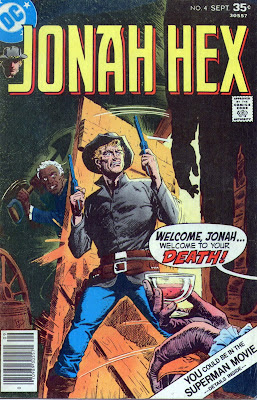 Jonah Hex goes monthly!! No more bi-monthly or eight times a year schedule. Monthly!!!! And we wade right into the continuing arc of the framed Hex. The story begins with a stagecoach roaring across west Texas. Inside is a couple on their honeymoon, a banker and an artist from a New York newspaper. Suddenly a masked gunman comes down the hill on horseback, shouting for the stage to stop. He steals everyone's wallets & jewelry and as he is getting ready to leave, his bandana slips. The banker shouts out that he knows this man, it's ..... BDOW BDOW!! He is gunned down in cold blood. The gunman rides off and the dying banker gasps with his dying breath "Jonah Hex......*"

Needless to say, there is some explaining to do and the story jumps right into that. There is a flashback to earlier that morning. We see a man in the woods applying makeup to his face so that he resembles Jonah Hex and he has a long running monologue about how he is an Adonis, the greatest actor of all, how he was jeered from the stage but know he shall only be known as ..... The Chameleon!! The Chameleon is lying in wait with a rifle and as Jonah comes around a bend, The Chameleon notes that the man from Virginia must have agents everywhere to be able to predict Jonah's whereabouts with such accuracy. Then he calmly pumps a rifle round into Jonah, knocking Hex off of his horse & into a shallow creek.

The Chameleon checks Jonah and notes that everything is going as planned and now he must make his appointment with the stage .... coach. The day passes and vultures gather around Jonah. A beautiful barefoot woman with a waterpail happens along and chases the vultures away. She finds that Jonah is still alive and she is able to help him walk to her cabin.

Later, after Jonah has been patched up (He currently has 3 bullet wounds), she introduces herself as Joanna Mosby. She tells Hex that she knows who he is, the papers all over Texas are full of the story of the murders. Jonah starts to tell her that he is innocent but she tells him that they shouldn't have any lies between them and them she starts putting the severe moves on the injured man. A knock on the door interrupts them. 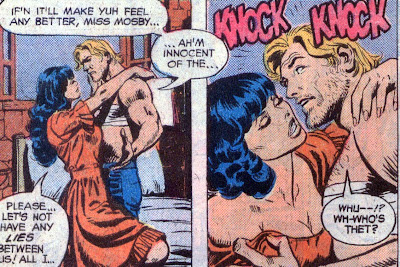 Joanna hides Jonah behind a wooden screen before answering the door.

Outside is a wounded Confederate soldier, missing one leg and an eye, he asks for some bread & water to help him on his way. Joanna invites him in and as she is gathering some food for the old soldier, the vet pulls a flour sack from his coat and hides it in a wood bin. Joanna gives the man the food and some whiskey which he takes with relish and then he leaves. Once outside the old man throws away his crutch, unties his leg, throws down his clothes and runs off. He was the Chameleon!!!

A little while later in town at the sheriff's office and old prospector comes sauntering in and explains that he was out by the Mosby place and saw a scar faced man in her cabin. The sheriff tells the prospector to stick around, he could get part of the reward but the old coot takes off because he is The Chameleon!

Back at the Mosby cabin we are treated to this scene as Jonah gets ready to head out. Joanna begs Hex to stay for his own good. When he won't listen to reason, she asks to be taken with him. A shout from outside signals the sheriff's intent to take Hex in. Joanna opens the door & tells the sheriff that she is by herself. The sheriff & his men barge in, one of them searching the woodbox to find the stolen loot from the stagecoach. One of the men notices a pair of boots sticking out from behind a wooden screen. The sheriff opens fire through the screen and we are treated to an outside shot of the cabin where Jonah is pulling himself up through the chimney onto the roof. He then jumps off, delivering a massive kick to the head of the deputy assigned to guard the outside of the cabin. 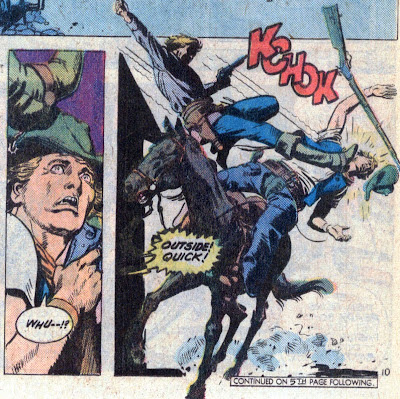 Jonah ends up riding off once again to save his hide. For six days & nights Jonah continues his search for Ned Landon until he finally finds his way to a deserted barn on the outskirts of Wyandott, Texas. He kicks the door open and sees Landon hanging from the rafters. A voice from the darkness causes Jonah to wheel around to confront Quentin Turnbull who had obviously recovered from the pitchfork accident the last time they met.

Turnbull assures Hex that Landon is only being hung in effigy for effect. He then outlines his plan to destroy Jonah for revenge for the death of his son. He hired Landon to trick Jonah to go to Mexico to face El Papagayo and Landon also commited the murders that Jonah is accused of. Turnbull had to kill Landon because he knew that Jonah would have hunted him down & made him talk. But now, Turnbull has hired the Chameleon and he is like having 100 men. Jonah is confused about Turnbull's ramblings.

Turnbull ignores him and notes that he wishes he could see Hex & The Chameleon!!! battle it out and it is such a pity that the flozzy will also have to die. Jonah leaps at Turnbull but the faithfull butler Solomon steps behind Hex and cranks him in the skull with a shovel. Hours pass and Jonah finally comes to, but Turnbull & Solomon are gone.

MEANWHILE!!! in town, the artist that was on the stagecoach is showing a sketch that he made of the man who held up the stage. The sheriff remarks that something strange is going on.

Jonah makes his way back to the Mosby cabin and as he is trying to get Joanna to leave with him, The Chameleon!!!, dress as Jonah steps from behind the wooden screen, with his pistol drawn. Jonah throws a water pitcher at him and knocks him out. As he crouches to pull off the makeup, Joanna smashes Jonah over the head with a large platter. Jonah comes to and Joanna has just finished tying him up. The Chameleon states that since Joanna has seen his real face she must die as well and ties her to a chair next to Jonah. The Chameleon!!! proceeds to set the cabin on fire and what happens next is one of the most bad-@$$ things I have ever seen in a comic. To explain would take to much & not do it justice. Just look & marvel. Surely this deserves the notice of the High Connoisseur of Head Kicking.

Joanna manages to get the knife from Jonah's collar and they burst out of the cabin as it collapses in flames. 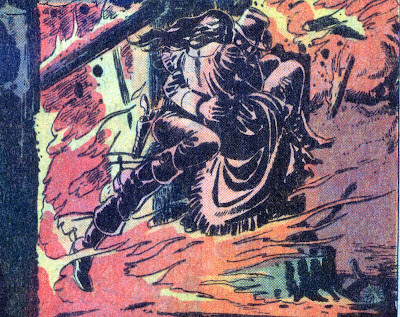 Joanna begs Jonah for forgiveness because she didn't know she would fall in love with him. She wraps her arms around his neck and reaches up to kiss Jonah and Jonah responds.

Jonah rides off and later the sheriff arrives, wondering what happened to the cabin. Joanna explains that it was a bacon grease fire. The sheriff wanted to tell Joanna that Hex didn't commit the robbery. The artist sketch showed that the scars on the bandit's face were on the left side of the face but Jonah's are on the right, so Jonah was framed. Joanna tells them that the man who robbed the stage is in the smoldering remains of her cabin, obviously dead.

Statistics for this issue
Men killed by Jonah: Are you ready? Zero.

Running Total - 125
Jonah's Injuries: Shot in the right shoulder, hit with a shovel, hit with a metal platter.
Timeline: ooooo, I'll actually have to come back to this & write a whole disertation on this.

Growing up I loved this issue and I think it had everything to do with Lopez and his rendition of Joanna Mosby. I remember hoping beyond hope that I would one day encounter a woman that looked like Joanna. I never did and it's probably a good thing too, because I don't go much for getting hit with things on my head. I also enjoyed the story thirty years ago. Now?

The things that are wrong with this story are the omnipresence that Turnbull has with "agents everywhere", the super-villian basis of The Chameleon!!!, the hokey wording of the monologues, Turnbull wanting to destroy Hex (why not just kill him), The Chameleon dressing up to hide the loot in the Mosby cabin when Joanna could have done it herself. There were tons of logic flaws that were only there to heighten the suspense & the drama.

The good things? Jonah responses to Joanna, all of his responses. I think that this was one of the most sensuous comics I have ever owned. The Lopez art and the colors really were top notch, heck I want to scan the whole book for you but I think that you should go buy it. Tell ya what, I have an extra copy (without cover) that I will GIVE to the first person to correctly guess the person shown in the next RINGSIDE!!! 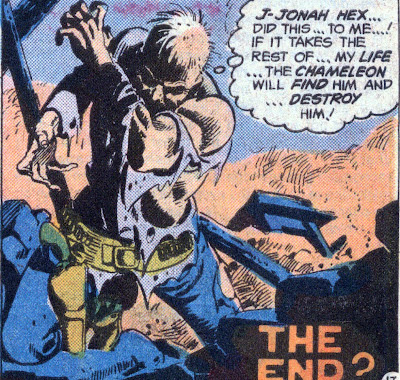 NEXT ISSUE: A deadline missed, A flashback, & Jonah Hex vs Lee Marvin!

That's some purty purty art, dagnabit! And the various kicks are truely magnificent.

How the heck does Turnbull keep coming back from the dead? He's awfully tough for an old coot.