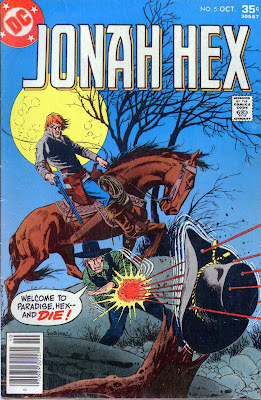 A dreaded deadline must have caught Fleisher & company in a lurch (not unlike myself) and they decided to reprint All-Star Western #10 with a new page of art in front & a new page of art behind. Our story starts with Jonah's horse being shot out from under him by a pursuing sheriff & posse. As they round the bend, Jonah is nowhere to be found. Shortly they come upon Mrs. Thornton riding in her buckboard. The sheriff explains about Jonah Hex being wanted and she says that she hasn't seen Hex in more than 5 years. She says that she remembers him coming into Paradise Corners like it was yesterday.... flashback to..... 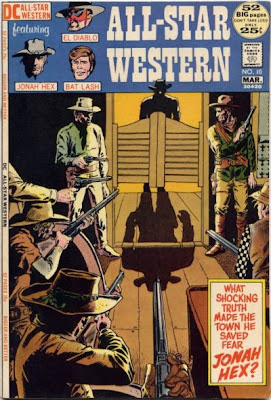 Jonah comes riding into town, dragging two dead bodies behind his horse, causing quite a stir through the town. He walks into a store (bank?) and speaking to three businessman states that they owe him $100 each for the bodies. As they pay him off, they explain that three more of the gang they hired Hex to find have just ridden into town. They are across the street in the saloon & have undoubtedly seen Hex ride into town.

Jonah climbs into a second floor window in the saloon, frightening a dance-hall girl, but managing to keep her quiet. As Hex exits her room, he sees the gang on either side of the entrance to the saloon, waiting to ambush him. He gets the drop on two of them, killing them quickly. The third runs out & Jonah jumps the rail and heads out the door, slamming into a young boy walking in the road. The young boy gives Jonah a good chewing out and then walks off. Everyone in the street is staring and Jonah shouts out a threat & they all run off.

The three businessmen come out & offer Jonah $200 for the two he shot. Jonah tells them he'll collect later, he is going to the blacksmith, get his horse and hunt down Big Jim himself. When Jonah gets to the blacksmith, he finds the smithy getting ready to whip Jonah's horse to correct him from rearing up. Jonah grabs the whip and knocks the smithy cold with one punch. 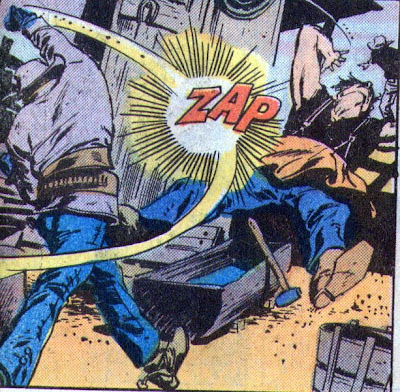 Later... in a cabin several miles from town (& that's EXACTLY what the caption box says) the escaped gang member, Cody, is talking to Lee Marvin, uh, Big Jim. Big Jim tells Cody to fetch some water from the well and Cody is very hesitant, but he goes out anyway. At the well he is drawing water and Jonah appears out of the shadows. Jonah strikes a match and for the first time ever, we get to see the right half of Jonah's face. Remember, through the whole story his face has been in shadow & they have only spoken of his scars. Cody reaches for his pistol and is gunned down before he knows what hits him. Big Jim hears Cody dying and then another shot stops Cody's begging.

Jim panics and crawls out the back window and when he sees a shadow he empties his pistol into it, but it is only a tree stump. He jumps on his horse and rides off, mile after mile after mile. Finally he stops to walk his horse and there on a hilltop, backlit by the full moon is Jonah Hex.

Jim takes off running in a panic for hour after hour. Finally he comes upon a farmhouse but Jonah is close behind, Cody's corpse on the back of the horse. Finally Jim comes out of the farmhouse, holding a gun to a young woman's head. Jonah asks why Jim thinks Jonah cares what happens to that woman when the young boy from town starts begging Jonah not to hurt his mom. Jonah drops his gunbelt and Jim throws the woman to the ground. He jumps onto Jonah's horse and starts to ride off but jonah pulls his knife and throws it right into Jim's back.

Jonah carries the fainted woman into the farmhouse. The boy is gushing admiration for Jonah and explains that he ain't got a pa. As Jonah gets ready to ride off, the boy asks if he will come back to visit. Jonah asks what for and the boy stammers about his mom's apple dumplings. Jonah hauls the two corpses off and says he might come back.

In town, Jonah collects his $400 and asks what happened to the boy's pa. The businessmen explain that he was killed in an indian raid years ago and that the woman is going to lose the farm due to $300 in back taxes. Jonah pays her back taxes and then asks about buying a house on the outskirts of town. The businessmen stammer that the house is sold and then they tell him that there isn't a house for sale in the whole territory. Jonah chortles that they think he would ever think about living in their stinking desert hole. As Jonah rides off, the three men thank their lucky stars that Jonah is moving on.

Jonah rides out to the farmhouse to get some of those apple dumplings. A shot knocks his hat off and he jumps off his horse, circles around and manages to get the drop on the gunman. It's the widow. She tells Jonah that Jonah has become a hero to her son and that she doesn't want Jonah anywhere around. Jonah rides off saying that he doesn't like either one of them. A few minutes later Jonah meets the young boy, obviously running away and he has intentions of leaving with Jonah. Jonah tells the boy that he hates him, hates him like poison. Riding further on, Jonah comes to the sign reading "Welcome to Paradise Corners". With one swift punch, he levels the sign & rides off. 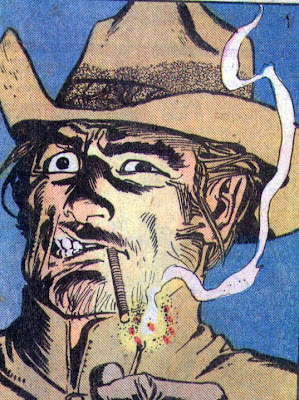 The sheriff tells Mrs. Thronton all that happened five years ago, but now Hex is a wanted killer. The sheriff & the posse ride off. A few minutes later Jonah crawls out from under the canvas in the back of the buckboard. Mrs. Thornton says that she has paid Jonah back for saving her farm five years ago and that Jonah needs to do is ride off and never coming back to Paradise Corners. Jonah heads out on horseback.

Statistics for this issue
Men killed by Jonah - 2 are dead at the beginning & he kills 4 more. We'll count it at 6. Running Total: (as of ASW 10) 6, (as of JH 5) 125
Jonah's injuries - none
Timeline - The flashback takes place five years prior to our current "Jonah - Wanted Man" arc. But we'll have to place this one in the timeline sometime later.

All in all a great story. Placing the Albano Hex up against the Fleisher Hex is somewhat jarring. Albano's Hex worked in a west where life was cheap, $100 was enough to hire a man to hunt you down, shoot you & drag your corpse back to town. In Fleisher's west it took $5,000 for someone to risk their life to kill you. It also seemed that Albano's Hex used fear a lot more than Fleisher's Hex did. That's saying a lot, since Fleisher wrote almost 100 stories for Jonah and Albano wrote about a dozen. Maybe Fleisher thought that the fear angle had been played up too much and I have to admit, the title of the book that carried most of Albano's stories was Weird Western Tales.

Fleisher worked very hard making Jonah more of a man & less of a demon & at times I wonder if it was for the better. But then I look at El Diablo and realize that Fleisher made the right choice.

I also wanted to go on record saying that this cover always confused me. I thought that Lee m
Marvin was showing Jonah how tough he was by shooting Jonah's hat. Oh well.

Jonah Hex #6: (on time, I promise) White water rafting, dynamite, and the return of Noly Panaligan (at least on inks)
or
All-Star Western #11: Jonah fights off buzzards & gets suckered by a woman
Posted by Dwayne "the canoe guy" at 10:35 PM

That really is one of my favorite issues. I loved that kid, the part where he tells Jonah that his father could beat him up, and then admits that he's the biggest liar in the whole territory just cracks me up.

I was always a little bit sorry that Jonah never got to eat those dumplings.