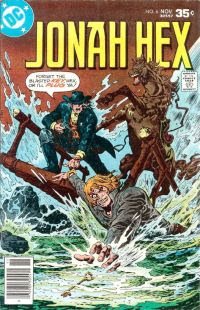 Jonah is still on the run and while he is bunked down in the middle of a thunderstorm he is caught unawares by U.S. Marshall Toby Ruster. Jonah attempts to explain his innocence, but Ruster will have no part of it. Ruster cuffs Hex and they both ride off.

After a time they come upon a river ferry and the ferry master explains that with all of the rain they won't be able to cross the rampaging river for about 3 days. Ruster offers to pay double, but the ferrymaster won't have any of it. Ruster tells the man that they will have to take turns guarding his prisoner, Jonah Hex. The ferrymaster jumps up & starts loading the the horses on the ferry. Ruster then cuffs himself to Hex to insure that Jonah doesn't try to escape.

I haven't read this one, but from your description, it does sound hilarious...in that "sometimes something is so bad that it's good" sort of way. George DOES sound like he has the mental capacity of a potato.

Sorry, that your scanner is still on the fritz.

I have some original comic book art that I want to sell. One of them is from a Jonah Hex comic. It has the full page as well as the comic book it appears in. I am in completely unfamiliar territory here. Can you tell me the best place/way to get the fairest price? Any help is appreciated.