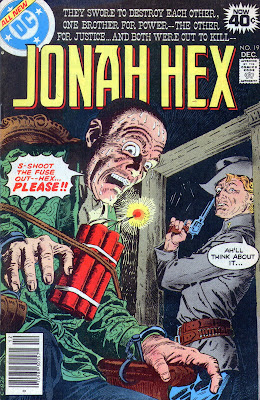 Jonah Hex #19 Dec 1978
"The Duke of Zarkania!"
Michael Fleisher, story - Vincente Alcazar, art - Luis Domiguez, cover
This story starts off with the SallyP seal of approval, meaning Jonah is buck naked in a pond taking a bath. But wait, we suddenly realize that Jonah is back in the States with no explanation of how long he has been there or what happened to him between here & Brazil. I feel a tumor in my brain and I think it is shaped like Michael Fleisher.
But I digress (as I am wont to do, as I am doing even now) and now back to the action. Jonah gets out of the pond, puts on his pants and hears something in the brush. He thinks it sounds like a grizzly bear and sure enough it is!!!! This happens to Jonah a lot. He thinks a gator might tip his canoe & it does, he thinks a bear is in the brush and it is. If I were Jonah I would start thinking "Thet sound in the brush, it sounds lahk a hot Swedish babe with two saddlebags fulla gold." or something like that. 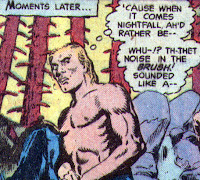 But I digress. The bear, having scared off Jonah's horse, takes a huge swipe at Jonah and suddenly three bullets slam into the bear, effectively killing it and causing it to topple onto Jonah. Jonah climbs out from under the bear and is greeted by his rescuer, Jaques LeFevre, a foreign painter traveling across the American West. Jonah asks if he has a spare horse but LeFevre says that he himself is on foot due to poverty. However, there is a town five miles down the road. LeFevre is going to stay until dark, painting as much as he can with the available light.
Jonah decides to hoof it down the road and since he passes a Suarro cactus, we know he is in Arizona. After a bit a fancy stagecoach comes thundering down the road. Jonah steps out into the road to flag it down. As the stagecoach starts to slow, the occupant shouts out to the driver asking why they are slowing. The driver explains that he is about to pick up a hitchhiker but the man tells him to continue on & run down the hitchhiker if need be. Of course Jonah doesn't take to being almost run over.
He dives out of the way, turns and jumps on the back of the stage, climbs over the top, punches the daylights out of the driver and then pulls the stage to a dramatic halt. Inside the stage are two men, the Duke of Zarkania and his bodyguard, Mr. Manson. Jonah, wearing the driver's top hat, pokes his head through the window, announcing that they have stopped to take on a passenger. The Duke is not pleased and as Manson pulls his gun and exits the stage, Jonah belts him a good one, deadlifts Manson over his head and tosses him over a cliff! I'm betting Manson is dead. Jonah climbs back into the stage and introduces himself. The Duke explains that he isIvan Veston, the Duke of Zarkania, and he had hired Manson to be a bodyguard. Veston's cousin, Lucien, has tried several times to assassinate Veston in order to turn Zarkania into a dictatorship. Veston offers the bodyguard job to Jonah for the next several weeks. Jonah says that his usual fee would $5,000, but since this is a special case, he'll make it $10,000.
The driver recovers and the stage continues on its way. Shortly the driver realizes that he would have been better staying knocked out because he ends up getting shot by some men hiding behind some rocks. Jonah hands the Duke a pistol and tells him to squeeze off a shot every 15 seconds. Jonah then sneaks out of the stage and attempts to circumnavigate the three men.

Up in the rocks, the men start lighting buckets of kerosene to throw unto the stage when Jonah pops up and guns down all three of them. Later, in town, the stage arrives and the stage driver is taken to the local doctor. The Duke dismisses Jonah for the evening and Hex heads off to the saloon to get a steak.

While at the saloon, Jonah is approached by LeFevre who asks if Jonah would prevail upon the Duke so that LeFevre could paint a portrait of the Duke. Jonah tells LeFevre to ask the Duke himself but he would put in a good word.

Later that night, the Duke is playing roulette and has already lost $20,000. Jonah points this out but the Duke tells him to mind his own business. He asks Jonah to go to up to the room to fetch some more money. While he is gone a drunk stumbles up to the table and starts harassing the Duke for a handout. The Duke gives him the brushoff but the drunk ends up spitting on the Duke and the Duke then challenges the drunk to a duel. It turns out as you would expect. 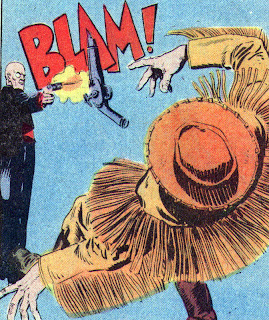 The next morning Jonah and the Duke are boarding the train when LeFevre approaches the Duke, requesting that he be allowed to paint the Duke's portrait. The Duke agrees and makes an appointment for that evening at his hotel. Once on the train, the Duke has taken up the sport of shooting buffalo from the train. After fifteen kills, the Duke notices that Jonah is silent. The Duke asks what is wrong and Jonah replies that this seems more like hog butchering than hunting.

This pretty much hacks off the Duke who orders Jonah off the train and out to the buffalo. The Duke is about to have Jonah butcher the buffalo for him, but there is a sudden stampede of the buffalo herd. The Duke wants to make a run for the train but Jonah grabs the rifle and stands his ground. He shoots the four buffalo in front and they fall, making a wall in front of Jonah & the Duke, forcing the herd to pass by on both sides.

Jonah escorts the Duke back to the train and then goes out on his own, investigating why the herd suddenly charged. Jonah finds horse tracks among the buffalo tracks as well as whip marks in the dust. Jonah spends the rest of the day following the horse tracks and ends up at an abandoned barn. As Jonah starts to peek into the window he is knocked out with a rifle butt.

When he wakes up he is hanging by his wrists from the rafters in the barn. LeFevre is there with two other men. LeFevre explains that he is Lucien Veston, the rightful ruler of Zarkania. The Duke had been the ruler for years but there was a revolution and he was overthrown. Before the Duke could be tried, he stole the royal gems and fled the country.Veston explains that they will take the Duke captive and return the gems to Zarkania. Veston leaves the two men to guard Jonah as he goes to paint the Duke's portrait.

Naturally, the guards don't pay very good attention and Jonah is able to pull himself up the ropes, gain some slack, pull his knife, and cut himself free. Jonah jumps from the rafters, kicking one guard and punching the other. He grabs a horse and heads for town.

In the Duke's room, Veston has set up an easel and has the Duke sit in a large chair. Once the Duke is in the chair, Veston handcuffs the Duke's arm to the chair. Veston removes his beard and demands the jewels. The Duke says that he will never tell. Veston pulls a bundle of dynamite from his bag and threatens to light it but the Duke reveals that he knew the plan all along, he couldn't be fooled by his cousin in a beard. The Duke shouts for his driver who enters the room and shoots Veston.

The Duke starts screaming for Jonah to put out the fuse but Jonah wants to clear up a few things first. He wants to know if the Duke had been lying all along and that there are jewels involved. The Duke screams that what Jonah says is true and that Jonah is not one to preach morality. The Duke offers all of the jewels to Jonah but he has to put out the fuse. Jonah explains that the fuse is too short and he couldn't reach it in time but the Duke points out that Jonah could shoot the fuse. Jonah pulls his pistol and shoots and then the Duke realizes that Jonah has missed. Jonah thinks that odd, either his sights...

..need adjusting or he is losing his touch. And Jonah calmly walks out of the hotel and people rush up the stairs.

Statistics for this issue:
Men killed by Jonah: 4
Running Total - 186
Jonah's Injuries: Knocked out
Timeline: This could be any random Jonah Hex story, no clues about any continuity whatsoever.

This has to be in the bottom of Jonah Hex stories. The lack of continuity with the previous Amazon River tales was a big let-down. The real killer was the ending. The Duke can't drag a large chair in order to reach the dynamite? And from the time Jonah says that the fuse is too short until it blows up is about 17 seconds (I timed myself reading the dialogue and acting it out). If dynamite was involved I can run around my entire house twice and on top of that, Jonah is standing 6 feet away and nothing happens when it blows up. This is lousy sloppy storytelling and I blame editor Larry Hama as much as I blame Fleisher for this crap sandwich.

Next Issue: A burning stagecoach, an unexpected reunion, and Hex dies! No, he really dies!
Posted by Dwayne "the canoe guy" at 7:36 PM

Hmmmm...there are some rather odd moments in this. For one thing, I don't think that a few bullets is going to do anything more than get that bear angry. It would have been a lot more fun if Jonah had to defeat it by wrestling and a corkscrew or something.

Secondly, why the heck did he throw that poor bodyguard off the cliff? He wasn't the one responsible for trying to run him over, it was his miserable employer. Guess Jonah was just feeling ornery.

By the way, who is in charge of Zarkovia or whatever, while the two "rulers" are busy trying to kill each other in the American old west?

And finally, that was one quick trip back from Brazil! It should have taken months at least. No wonder he needed a bath. But the first part in the pond, does indeed get my seal of approval!