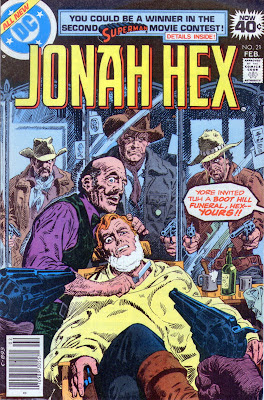 Jonah Hex #21 Feb 1979
"The Burying!"
Michael Fleisher - story, Vicente Alcazar - art, Luis Domiguez - cover
The story starts 3 days ago with a casket being lowered into the grave of Woodson Hex, Jonah's wonderful, loving, caring father. Well, ya know what I mean. After the funeral, Jonah heads south towards Apache Forks and his not dead father (No, he's not a Zombie!) is up in a mountain cave digging up the $250,000 in gold Double Eagles that he stashed there previously.
Several days later, we see Woodson living it up buying drinks for everyone in the saloon and getting sweet on a blonde haired 'working girl'. She takes the drunken Woodson up to her room and on the way she signals to a trio of ne'er-do-wells. Once up in her room Woodson hears something out in the hall and realizes that he is about to be robbed. He bars the door with a chair, slaps the crap out of the woman and then hightails it out the window. 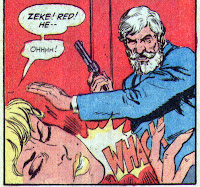 Once outside he runs down the street in the dark. As the three men chase him, Woodson finds an open window and crawls inside. He discovers that he is in a funeral home. He opens a casket, lifts up the body and puts the saddlebags holding the money in under the body. He crawls back out the window and is nabbed by the gunmen.
Zeke, Frank, & Red smack Woodson around a little, demanding the money. Woodson holds his secret until they place a gun barrel in his mouth. That's when Woodson lies, saying that Jonah took the loot south to Apache Forks. Zeke tells Red & Frank to take Woodson to the old mill. Zeke will get Ben & some others to go round up Jonah.
The next afternoon in Apache Forks, Jonah is getting a shave and a bootshine. The barber places a hot towel around Jonah's face and the front door swings open and three men are holding guns on Jonah. They say they have urgent business with Hex. Jonah asks the shoeshine boy how much they charge for a funeral in town. He says that it's $20.
Jonah tells him to fish $40 out of Jonah's coat and tell the undertaker to get ready for a twin burying. The shoeshine boy says that it would be $60, since there three men there. Just then Jonah jumps up, his face still covered with a towel, and guns down the three men.

Jonah asks the barber if he knew the men. The barber replies that he doesn't & why should he. Jonah says that as bad as the barber is, he thought they were past customers looking for a refund. Jonah tips the kid a buck and leaves.
Outside, Zeke and Ben watch Jonah leave and start reworking their plan.
Later, Jonah is eating supper when the shoeshine boy comes running in, saying that his mom has been trampled by a horse and he needs Jonah to help. Jonah follows the boy and asks why he didn't get the doc. The boy says that the doc won't work on colored folks and leads Jonah into a barn where Zeke & Ben mistake Jonah for Hal Jordan and hit in on the head with a 2x4. They tip the kid $5 for leading Jonah into their trap. Then they realize that the kid could id them. They pistol whip the boy and take back the $5. 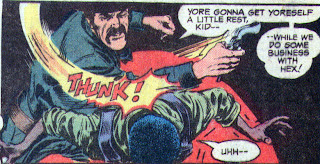 When Jonah comes to, Zeke starts demanding to know where the money is. Jonah has no idea what they are talking about. A crowbar to the gut brings no revelation to Jonah. Zeke demands again to know where the money is that Jonah & Woodson stole. Jonah calls him crazy since his father is dead. The crowbar comes crashing down on his left shoulder and the back of his head.
Jonah comes to finding himself tied, along with Woodson, to a waterwheel. They have been tied with rawhide and once the rawhide gets wet & shrinks, they will choke to death. Whenever they want to divulge the location of the gold, Zeke will set them free. But....but...rawhide stretches when it gets wet, right?
The crooks leave and Jonah & Woodson start turning slowly on the wheel. Jonah is pretty peeved that he paid for a funeral and the least that Woodson could have done is actually die. Jonah realizes how he was tricked and Woodson starts pleading for Jonah to save them both. Jonah tells Woodson to get the knife in the back of Jonah's shirt and cut them free. That is how they both manage to escape.
Inside the mill, there are four other guys with Zeke playing poker when suddenly Jonah & Woodson bust down the door, Jonah with some rope & Woodson with a shotgun. Jonah tells his dad to keep them covered while he ties them up. Woodson tells Jonah to cover them himself, he has a funeral to attend. Woodson turns and runs out the door, taking the shotgun with him.
Zeke & his buddies see their chance and draw on Jonah, but Hex guns down all five of them.

Jonah grabs a rifle and runs outside, drawing a bead on his own dad. Jonah demands to know where the money is at. Woodson explains the situation and offers to split with Jonah. Jonah declines, stating that the money still belongs to the stage line.
They arrive in town just in time to see a funeral procession containing the casket that Woodson has hidden the gold in. Jonah is all for riding in, ripping open the coffin and getting the goods. Woodson berates Jonah for not respecting the dead, they can dig it up later. But Woodson is really planning on busting Jonah on the noggin again and making off with the money.
The two follow the funeral procession out of town up to an old mine. A local explains that old Deke Simms and his burro worked that mine for 40 years and wanted to be buried in the mine. The pallbearers tote the box in and then they dynamite the mine to seal old Deke in forever.
Woodson just stares open mouthed and then asks Jonah which way he's gonna be headin'. Jonah says he'll head North. Woodson says he'll probably ride South and they both part ways.

Statistics for this issue:
Men killed by Jonah: 8
Running Total - 203
Jonah's Injuries - Hit on the head twice, a crowbar to the gut and to the shoulder.
Timeline - This takes place several days after the prior issue, but there is a reference to Jonah having recently obtained his matching dragoons, so this is in continuity behind the Amazon story and with the prior issues mention of Jonah being sold to Apaches almost 25 years earlier puts this in 1875.
All in all, a pretty good issue, even with the Ocean's 11 (the original) ending (which I like a lot). Jonah's dad really is an evil man and didn't sway from that one bit. I also enjoyed how the water torture was depicted, it seemed like that water wheel was moving niiiice & slooooow. I have to give kudos to Fleisher for having the guts to have Jonah & his dad reunite and have his dad stay the mean-hearted sonuvabitch that he appears to be. Rumor is that Woodson will be popping up in the new series as well. I also enjoyed the cover with the gun barrels pointing away from the reader & the outlaws reflected in the glass, a nice effect that would be very hard to accomplish in a film.
Next Issue: Hex has some dynamite, a bow & arrow, and a busted leg. Yup, he's STILL dangerous!
Posted by Dwayne "the canoe guy" at 10:30 PM

Now THAT'S a twist for an ending! This really does look like a brilliant pair of books, and some top-notch plotting as well. I loved the part where you said that Jonah was pissed because he had to pay for the old Man's funeral...the least he could have done was stay dead.

It does sound as though Jonah isn't overly sentimental about his old bastard of a father...which is probably a good thing.