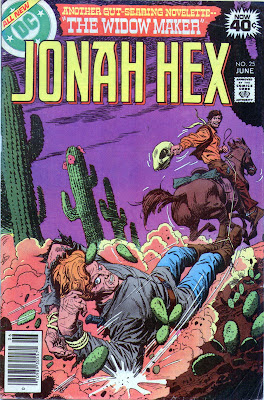 We are in Lawrenceville, Kansas, 1876 (cuz there is a caption box that tells us so) and Jonah Hex is riding into town as the newspaper office is engulfed in flames. The bucket brigade has already given up hope even though Nate Ashin, the owner, is still trapped inside. Jonah jumps off his horse and rushes inside since Nate saved Jonah's life back in Vicksburg (and lost his right arm in the process).

Jonah plows through the flames and pulls a large bookcase off of Nate and then they both jump out through a window. Outside, Nate starts cursing the Black Hat Boys, blaming them for the fire since Nate has been printing articles against them. Just then, Simon Nader, the hardware store owner walks up and offers any help he can. By now the fire is under control so Nate invites Jonah to his house for supper. During dinner Nate tells how the Black Hat Boys have been robbing banks, stealing horses, causing trouble and Nate has been speaking out against them. Nate's wife, Sally, complains that they don't need a bounty hunter, they need a marshall and Jonah Hex is probably going to bring grief down on their heads. Sally gets up to clear the plates when Jonah jumps up and knocks her to the floor just as the window is shattered by gunfire.

Jonah looks out the window and counts eight men in the darkness. He climbs out a bedroom window and manages to climb up a high cliff behind the men. Down on the ground, the Black Hat Boys are getting Molotov cocktails ready to set the house on fire. Jonah lights up a bundle of dynamite and lobs it down onto four of the men. The other four hightail it out of there.

By the time Jonah gets down from the hill and to his horse a large storm has broken and Jonah has to try to track the outlaws through the mud. Several hours later he comes upon their shack. he kicks open the door, announcing that skunk-trappin' season is open. the outlaws throw their guns down and Jonah is suddenly knocked out from behind with a pistol butt by Simon Nader.

When Jonah comes to he is hogtied and tied by his feet to a horse. Nader tells his men to drag Jonah until he is dead and two of them take off. As Jonah is being drug, he manages to get his knife that he keeps in th eback of his shirt. He cuts the rope at his feet and when the riders stop throws the knife, hitting one in the side and then he grabs a rock and bashes the skull of the other rider. He grabs a horse and heads back to Nate's house.

Back at Nate's house, Simon shows up and with the two remaining gang members, he shoves his way in. He explains that he is going to kill Nate when one of the outlaws looks out the window and sees Jonah riding up. The two outlaws panic and head for the door. Simon declares that nobody runs out on him and he guns both of them in the back.

Outside, Jonah is strapping on his guns and calling Simon out, saying that there is nowhere Simon can hide. Nate tells Simon that he needs to give up or Jonah will kill him. Simon tells Nate that Nate will walk out the door, tell Jonah that Nate killed Simon and his men, invite Jonah inside, and then Simon will kill Jonah.

Nate steps outside, telling Jonah to hold his fire and then suddenly dives to the ground, yelling that it's a trap. Simon steps into the doorway and shoots Nate in the back as he lies in the mud. Jonah starts stalking toward the door. Simon panics and starts shooting Hex, but Jonah just keeps walking towards him.

Jonah takes two bullets and then grabs Simon by the collar, dragging him outside.

Jonah drags Simon through the mud, grabs a coil of rope of the horse's saddle and throws one end over a branch in a nearby tree. Jonah ties a quick noose around Simon's neck and then forcibly pulls Simon up into the tree, hanging him by the neck. Jonah starts to apolgize to Sally but she starts ranting about what will happen to her, to her children and she yells at Jonah, calling him a widow maker.

Jonah rides of into the rising sun, Nate's body in the mud, Simon swinging from the tree, and Sally and her children sobbing.

Statistics for this issue
Men killed by Jonah - 4 by dynamite, 1 by hanging: 5 total
Running Total - 224
Jonah's Injuries - Pistol whipped and drug by a horse
Timeline - 1876. There, that's nice & simple. Totally out of the regular flow from the last issue, or not. Who knows? This story spans one day.

A seemingly short story, we have a burning building, an explosion, a shootout but there is really no room for any character development. Simon Nader was introduced too quickly and there was no drama when he was revealed to be the leader of the Black Hat Boys who were really just cut-out outlaws (Cut-outlaws?). The best part of the whole story was Jonah walking through the gunfire and yanking Simon up into the tree. That just reeked of Albano Weird Western. Great stuff! 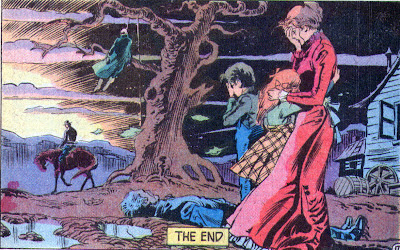 Next Issue: Jonah takes up practicing medicine.
Posted by Dwayne "the canoe guy" at 8:31 PM

Well! I must admit that the final scan was just lovely. That's one heck of a spooky old tree.

You must admit that Sally has a point.