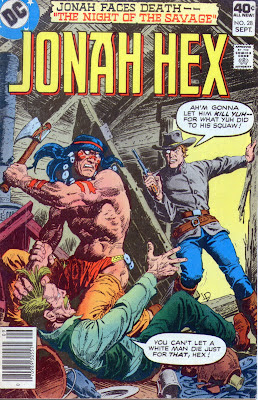 Jonah Hex #28 Sept. 1979
"Night of the Savage!"
Michael Fleisher, story - E.R.Cruz, art - Luis Dominguez, cover
The story starts off with Jonah caught in a nighttime downpour and he's complaining about being a whole day late getting to Bartonsville. Jonah is responding to a telegram he received from 4 men; Stults, Marshall, Gabler, & Jenkins.

Thity five miles away we find Mr. Stults in his cabin with bodyguards. Stults is wondering what is keeping Hex and is afraid that the death threat he has in his hand will come to pass before midnight.

We see a huge Indian brave climbing on the roof, carrying a blanket. The Indian places the blanket over the chimney and when the smoke gets too intense in the cabin, Stults & the bodyguards run out. When Stults stumbles off the proch, the Indian is there, mounted on his horse, a bow & arrow drawn taught. 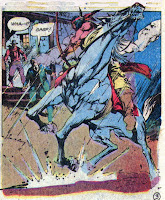 The Indian sends the arrow straight into Stults, killing him, and then rides off with the bodyguards firing their pistols after him.

The next day Jonah Hex has located Marshall, Gabler, & Jenkins, all three at the cemetery, having just buried Stults. Jonah apologizes for being late and the three men explain their problem. They purchased a parcel of land from this Indian so that the town could use it for the reailraod coming through. The Indian then decided that he wasn't paid enough and has refused renegotiations and has vowed to kill all four men.

Jonah clarifies that Stults received a note prior to being murdered and Marshall shows the one that he received that morning, attached to an arrow that was shot through his window. Jonah decides to stick close to Marshall for the rest of the day. As they ride along, Jonah spies a deadfall covered with loose branches and leaves. Jonah dismounts and pulls back to expose the pit, filled with sharpened stakes. When Jonah stand up and turns he finds that the Indian has managed to drop a rope from a nearby tree and lynch Marshall. 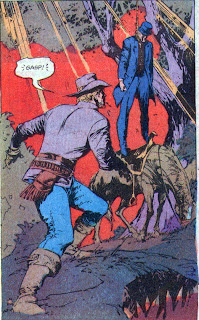 Back in town Jonah explains Jenkins & Gabler what has happened to Marshall. While they are standing there arguing over Jonah's methods, an arrow comes crashing through the window. It has a note with Jenkins name on it.

That night, at Jenkins house, it nears midnight when gunfire rips through a window. Jonah knocks Jenkins to the floor and peers out the window. He can tell that the gunfire is coming from a nearby hill. Jonah tells Jenkins to keep low as he runs out the back. Heading up the hill, Jonah thinks it odd that the Indian, whose past attacks have been very close & personal, would choose a rifle this time.

Jonah tops the hill to find a campfire into which the Indian has thrown several rifle cartridges. Just then a loud scream pierces the darkness and Jonah realizes that he had been hoodwinked as he sees the Indian riding off on his horse. Jonah manages to track the Indian most of the night, seeing through the Indian's attempts to throw Jonah off the track.

Finally Jonah sees the Indian sitting by a campfire. He slowly sneaks up behind the Indian and just as he jumps the figure, he realizes that it is a dummy made of straw and at that moment the Indian steps out of the darkness and cranks Jonah a good one on the noggin with the backside of a tomahawk.

Jonah awakens bound hand and foot with the huge Indian standing over him. The Indian starts communicating with Jonah via sign language. He relates how last month the four men rode to the Indian's land to attempt to buy him out so the railroad could come in. He invited the men into his hogan and they smoked for some time. Then one of the white men brought out some liquor and in no time the Indian was blind drunk. The four men convinced the drunken Indian to sign away his property and after the Indian passed out the white men killed the Indian's wife (rape is possibly implied here). The Indian awoke some time later, realized what happened and went into the forest for a week long fast, asking the great spirit for guidance. Following the request of the great spirit, the Indian cut out his own tongue as a sacrifice and then murder the four men.

The Indian leaves Jonah in order to kill Gabler. Jonah, alone, manages to get his knife from his shirt and cut himself loose. Hex realizes the men are getting what he deserves, but Jonah has his reputation to think of and takes off after the Indian.

At Gabler's house the Indian smashes through the front door with a tree and as Gabler falls to his knees before the tomahawk wielding Indian, Jonah walks in with a rifle.

Jonah tells the Indian that Gabler will stand trial and will probably hang but the Indian swiftly swings his weapon and smashes the only lamp in the room and jumps out the window. Jonah fires after him, but the Indian makes it to his horse and rides off. Gabler rants at Jonah for missing but Jonah tells him that he never misses, just sometimes he doesn't hit what he's aiming at, besides, Jonah won't rest until he brings that Indian in so the law can deal with him.

Statistics for this issue
Men killed by Jonah - zero
Running Total - 233
Jonah's Injuries - Cranked on the head with a tomahawk.
Timeline - Nothing in the story to indicate a timeline except that Jonah starts off in a rain storm, more than likely NOT the one he finished last issue in.

I'm really really torn on this issue. Jonah gets completely schooled by this Indian, falling for tricks that Jonah has used time and again, so this was more out of character than almost every other Hex story. Also, we never see this Indian again, even though Jonah vowed to hunt him down. Aaaaand, the cover gives away the whole story (on the plus side, SallyP gets a partial Indian butt-shot)

The other side likes to see Jonah fail once in awhile but this was excessive. I guess I can't give this issue a thumbs up.

Next Issue: Jonah tries to help a little girl and ends up in a pine box! 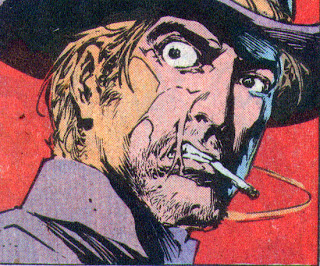 Hmmm....I agree with you, I can see Jonah falling for one or possibly TWO of the tricks, but every single one? He's smarter and meaner than that.

On the other hand, butt shots are always welcome.