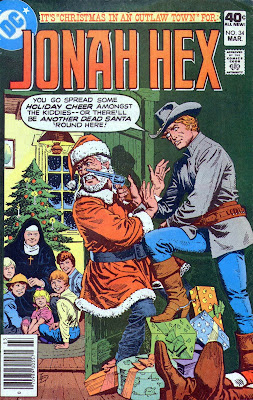 I teased with this cover last year and now here is the whole story. Jonah is tracking the Boley Boys through the snow and reminiscing about how his old man used to get drunk during Christmas and beating Jonah as a child. Meanwhile, 40 miles away at the home of Clarence Dooley, Mr. Dooley is getting dressed as Santa Claus as he does every Christmas for the local orphanage. Sadly, the Boley boys break into the house demanding money. Dooley points them to the open safe and as the outlaws leave, they decide not to leave any witnesses.

The next day, Jonah is at the cemetery where Dooley is being buried. Jonah is talking to a local Sister, verifying that Dooley's valet survived to identify that it was the Boleys. The Sister mentions that the kids will be very sad since Dooley played Santa every year. Jonah says that there is nothing that he can do about that, but he will bring in the Boleys.

Jonah rides off, tracking the Boleys for a full day and night. The next morning Jonah rides up to the ghost town of Willow Creek, hoping to fill his canteen from a well. When he rides into town he finds that the town is just bursting with people, and not fine upstanding citizens but several outlaws that Jonah recognizes. However, he is centered on finding the Boleys and walks into the saloon to see if he can find any information.

He finds more than information, he finds the Boleys and when he draws on them, they calmly point out the "No Firearms" sign. Jonah is flummoxed and manages to just avoid getting smashed over the head with a chair by one of the Boleys. A huge fistfight breaks out and Jonah is on the losing end when the sheriff of the town walks in and breaks it up. Jonah stands up and finds out the sheriff is... 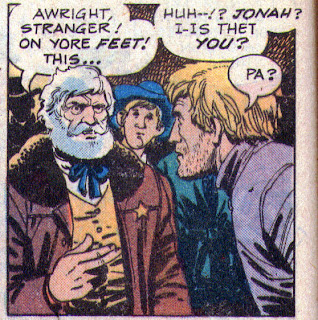 Jonah gets arrested and gets hauled in front of the judge...

Jonah gets no mercy and in addition to getting pistol whipped, he gets thrown into jail for 30 days. Pappy Hex explains that he is running the town as a hideout for every known criminal and gets a cut of every crime that they commit in return for protection. Pappy explains that he would love to chat but he has to rob the Transcontinental Limited along with the Boley Boys. Pappy heads out, leaving the deputy in charge. (we'll see how effective THAT plan is)

No sooner is Pappy out the door does Jonah pull the knife from his back and threaten the deputy. The deputy turns to get the key and manages to trip over a spittoon, fall, and knock himself out. Jonah then has to resort to dragging the deputy over to the cell, take his gun, and shoot the peg upon which the keys are hung. With the keys on the floor, Jonah uses his belt to drag the keys over to the door and he unlocks the door himself.

Later, the Transcontinental Limited has been stopped by armed bandits. The engineer and the fireman are forced to open the car holding the gold and even open the safe. The door to the safe swings open and there stands Jonah Hex, guns drawn. Jonah guns down the Boley Boys and spares his paw. Pappy pleads for his life and Jonah says that if Pappy doesn't do exactly what Jonah says, Pappy will be in the pen for a hundred years. Pappy agrees to anything.

The scene cuts to the orphanage with a huge Christmas tree set up and a ton of kids trying to sit on Santa's lap. The Sister is thanking Jonah for finding a replacement for Mr. Dooley/Santa. Jonah states that just hearing the laughter of the children and seeing the contented look on pappy's face is reward enough. Jonah wishes his paw a merry Christmas and heads for the door. The kids are now climbing all over Pappy, pulling off his beard, knocking his hat off and Pappy is screaming for Jonah to come back or he'll get Jonah in the end. Pappy screams that he is the craftiest Hex.

Jonah rides off, shouting Merry Christmas and laughing his head off. 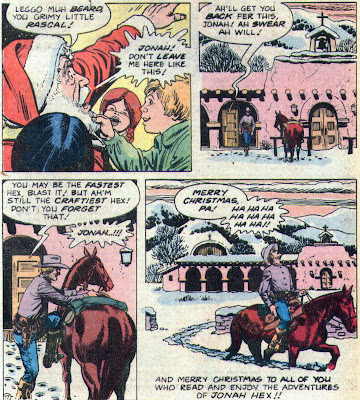 Statistics for this issue
Men killed by Jonah - 3
Running Total - 261
Jonah's Injuries - Beat up in a fight and pistol whipped.
Timeline - It appears that this one takes place after the last meeting between Jonah & his dad, so that would be 1875 or after.

There wasn't a whole lot to this issue and no explanation as to how Jonah managed to survive being locked in a huge safe. BUT (and that is a big but) I enjoyed this issue an awful lot. It was a pretty light-hearted story with the sheriff/judge bit and the ending page with Jonah laughing that hard (which may be the only time Jonah ever laughed. I'll have to research that one) and it was a nice change of pace in the history of a man whose story ends up being about one of the most painful and tragedy filled lives in the history of comics.

Here's hoping you and your family have a blessed Christmas. We'll be back (probably after the first of the year, but you can never tell) 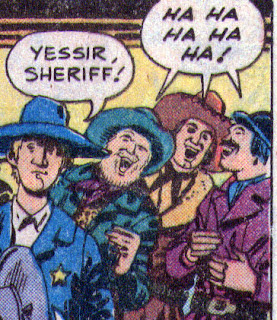 Next Issue: The return of Quentin Turnbull and the Fort Charlotte brigade.
Posted by Dwayne "the canoe guy" at 8:07 PM

This does look like fun, and seeing Jonah laughing is definitely a bonus. On the other hand, all the Santa Claus stuff is an anachronism.

Wasn't it Nast who came up with the cartoon of Santa Claus? However, I think that was in the 1880's when the idea began to spread. Heck, we didn't even have Christmas trees until after Queen Victoria's marriage to Albert made it popular...unless you were of Germanic descent.

I know...blah blah blah. But it sure was nice to see Jonah outwit his Pappy for a change.

Actually, according to the History Channel, Thomas Nast developed the modern Santa in 1863 and the practice of setting up Christmas trees was pretty widespread in England and the US by 1850.

Dwayne, you are better at your research than I am.