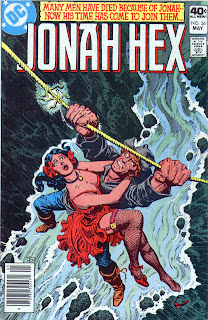 Jonah Hex #36 May 1980
"Return to Fort Charlotte"
Michael Fleisher, story - Dick Ayers & Luis Domiguez, art - Luis Dominguez, cover
Jonah Hex is about to enter his hotel room when three men, a short one (Maynard Judson, local banker) and two gorilla-size, stop him and ask if he is indeed Jonah Hex. He admits that he is and turns down what he thinks is a 'welcoming committee' thanking him for capturing the Carley Brothers. But they are not a welcoming committee. The two large thugs beat the crap out of Jonah and throw him over the railing into the saloon below.

When Jonah comes to, he is being attended to by a 'saloon girl' (aka hooker) who sees that Jonah has three broken ribs (okay, she's a hooker with x-ray vision). Judson explains that Painted Butte is a nice town and they mean to keep it that way. 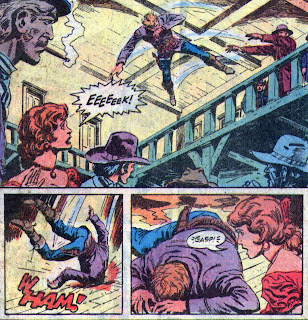 They don't cotten to gunfighters and hookers so they put Jonah and the woman on horses and lead them to the edge of town.
As they ride off, the woman keeps pestering Jonah for her to bandage up his ribs but he turns her down. Eventually she almost talks Jonah into a coma (but she does score points for pointing out that she made need Jonah's help to survive in the wild west). Jonah thanks her and asks her name. She meanly wants to know why that is important, is Jonah gonna whisper it in her ear late at night when he tries to kiss her? Jonah replies that he wouldn't even let his horse kiss her.
A short while later they come to an old bridge. The woman gets off her horse and leads it across but when she gets to the middle, the ropes on one end snap. The horse plummets to its death, but the woman grabs onto of the bridge. Jonah unfurls his rope and (with three busted ribs, mind you), lasoos a branch on the far side. He ties off the rope and then travels across, hand over hand. He manages to grab the woman's hand and pulls her up so she is hanging around his neck.
This being a book about Jonah Hex, one of the unluckiest men in the old west, the rope breaks. 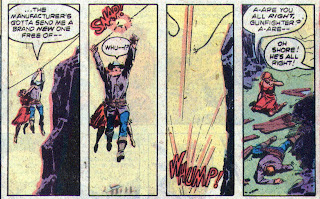 This being a book about Jonah Hex, one of the LUCKiest men in the old west, he and the woman both survive the fall. But of course, this book is about Jonah Hex, blah bla blah balah balah bala, so he and the woman end up bring surrounded by the Fort Charlotte Brigade. The Brigade clubs Jonah and the woman over the head, knocking them out and then throw across a couple of horses.
Twelve hours later they arrive at Fort Charlotte. KABLAM!!!!!! Yup, my head exploded again. Near as I can figure, they were in far west Texas last issue. It appears in prior issues that Fort Charlotte was back east (like, maybe, South Carolina? But wait, would a Union fort BE in South Carolina?), but obviously you can ride a horse 1600 miles in twelve hours or about 134 miles an hour. KABLAM!!!!!!

Anyway, the Brigade take Jonah and the hooker and toss them in the very same brig that Jonah was held in back in Jan. 1863. Jonah explains the whole terrible history to her and they even find that the tunnel still exists. The hooker then understands that the Brigade plans to re-enact the massacre that happened "more than ten years ago." (placing this story after Jan of 1873, but since folks rarely take into account what month an event happened in addition to the year, I'm leaning toward the year 1874, even though I thought the first part of this story took place in 1878. I can be wrong sometimes. )

Jonah explains the layout of the fort, how you have to crawl through concertina wire, get past the Gatling guns and then through the barbed wire. The hooker gets a bright idea and since Jonah saving her life back on the bridge was the first time a man ever did anything for her without expecting something in return, she smashes a stool over his head, knocking him out. I love hooker-logic.

Outside the fort, the Brigade are watching the perimeter of the fort, waiting for Hex & the hooker to make their escape. Using binoculars in the dark, they are able to see Jonah crawling under the concertina wire. What they are actually watching is the hooker wearing all of Jonah's clothes making the escape. Once past the wire, the hooker trips the wire that sets off the "automatic" Gatling guns. I don't know what is more awesome, a hooker in Confederate greys or automatic Gatling guns.

Our brave little hooker hits the ground in time to avoid all of those bullets and makes her way to the barbed wire. The Brigade is watching her progress and notes that "Hex" will soon find the wire cutters that they left by the fence. Indeed, she does find the wire cutters and the moment she cuts the first wire....

The Brigade is now satisfied that Jonah Hex, their sworn enemy is now dead, all thanks to them hooking up a dynamite detonator to the barbed wire. They ride off to report to Turnbull and return to their families. Off course, the rousing explosion awakens Jonah (he's wearing long-johns, sorry ladies).

We cut to Richmond, Virginia several hours later and find Solomon delivering a telegram to Mr. Turnbull. Turnbull learns that Hex is dead and states that Hex was a formidable adversary "these past ten years". (again, I'm leaning more to 1874, here). The last panel we see Jonah riding off in his long-johns, his tattered clothes clinging to the barbed wire and a makeshift grave of piled stones marking the last resting place of the hooker.

Statistics for this issue
Men killed by Jonah - None
Running Total - 261
Jonah's Injuries - Beaten up, three broken ribs, fell from a bridge, pistol-whipped, hit with a rifle, knocked out with a stool.
Timeline - Well, taking into account the verbal references from the Hooker & Turnbull (two folks that you can always rely on), I'm placing this at 1874.

How did I like the story? Ehhhhh, not so much. The cons? Automatic Gatling guns, lack of geographic knowledge, no real reason for the hooker to die (or even to risk her life), I'm not sure that they had the means to blow something up when a current was broken (via a CUT wire), Jonah & the hooker falling into a canyon & living, Hex landing on his HEAD from the balcony.... The pros? I really really really liked the cover with that perspective.

I guess I would toss this one near the bottom of the barrel regarding Hex stories.

Next Issue: Waterproof dynamite, Harper's Ferry, Chancellorsville, and Jonah decides the outcome of the Civil War.
Posted by Dwayne "the canoe guy" at 9:30 PM

Well, that's too bad: I remember that cover used for a house ad in a Batman issue way back when, and that cover is sharp. Pity the issue doesn't bring the A-game too. Still, thanks for showing me what I missed there!

It IS a nice cover. I have this one, and I have to agree with you, that it doesn't really make a whole lot of sense.

Maybe they meant 12 DAYS instead of hours? Or a train? Who the heck knows?

Too bad about the longjohns though.

Wow .. 1980! This was the first Hex comic I ever saw. It was on Granddad's magazine stack with his Westerns and his 'Sex to Sexty' collection. A few years later and I was collecting my own (um, Hex, that is).