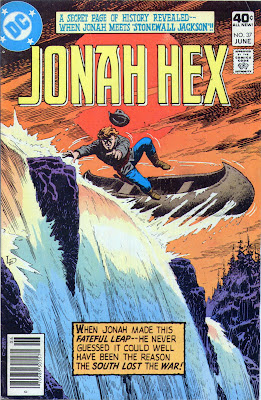 Jonah Hex is standing, hat in hand, head bowed, before a large tombstone. Nearby, an old cemetery groundskeeper and his grandson look on. The young boy asks if that is really Jonah Hex. The groundskeeper affirms that it is and that Jonah stops by whenever he is in the area. The youngster asks who is buried there and the grandfather's reply is that it is the grave of "Stonewall" Jackson.

The old man tells the story of what a great general Stonewall was and how Hex was a good fighter in his own right, just being a lieutenant. Once, when Hex was on a scouting mission, he saw a Confederate being chased by five Union soldiers. The Confederate is shot off of his horse and then Jonah intervenes, hitting one Union soldier in the chest and another in the head. He continues to fire at the three remaining Union soldiers when his horse takes a tumble down the hillside and Jonah ends up on the ground in the open. He squeezes off three shots, killing the rest of the Unions troops.

The injured Confederate soldier comes forth to thank Jonah and introduces himself as General Stonewall Jackson. 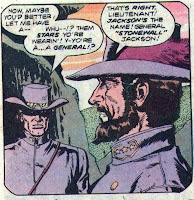 Stonewall invites Jonah back to camp where he outlines his mission. Stonewall has been ordered to take the Federal armory at Harper's Ferry (placing this part of the story in Sept. of 1862). Stonewall needs a man who can singlehandedly dynamite the bridge over the Potomac. Stonewall has heard that Jonah spent time with the Apache, so could he navigate a canoe?

Jonah takes on the mission and soon finds himself on a canoe traveling down some hellish rapids. Of course, this being a Jonah Hex comic and the financial straits that the Confederacy was suffering at the time, Jonah's canoe paddle breaks. Since the Confederacy was suffering all of those financial cutbacks, their map makers (low-paid that they were) didn't bother showing little extras on the map. Things like.....waterfalls.

Jonah survives the falls, retrieves his backpack, and continues on to the bridge. Once at the bridge, he pulls out some dynamite, tied it to the bridge and then lights it. I was completely unaware that the South had waterproof explosives and matches back in 1862!

Jonah is discovered by a Union patrol but he manages to knife one of them and blow up the rest when the bridge explodes. Jonah reports back to Stonewall where he is thanked for a job well done and then returns to his cavalry unit.

Seven months later, Stonewall Jackson is engaged at Chancellorsville where he is routing the Union forces. Night falls and Stonewall and his men get lost. Several miles away, Jonah Hex and his men are holding a position, on the lookout for Union forces that are attempting to flee Chancellorsville. In the darkness they see several riders approaching. Jonah has told his men to hold their fire until he shoots. Jonah takes the first shot, striking General Stonewall Jackson.

Back to present day, the groundskeeper explains to his grandson that Jonah Hex is the man responsible for the death of Stonewall Jackson. We see Jonah mount his horse and then ride off.

Statistics for this issue
Men killed by Jonah- 6 Unions soldiers shot, 1 stabbed, 1 blown up & Stonewall Jackson for a total of 9
Running Total - 270
Jonah's Injuries - Dumped over a waterfall, but that doesn't ever hurt Jonah.
Timeline - We have no idea when the opening takes place except that it is after 1866. It is probably during one of Jonah's trips to Virginia, encountering Quentin Turnbull. The flashback takes place in 1862 & 1863.

All in all, the story isn't bad, but there isn't much there. Jonah shoots some Union soldiers, goes over a waterfall, saves the day, and loses the war for the South. It is nice to see Jonah pre 1866, history is always nice to have on a character. Of course, there is no explanation of how Jonah rejoined the Confederacy after the Fort Charlotte Massacre.

Next Issue - A dying Indian's plea, an ancient map, a blind prospector and Jonah takes his shirt off!
Posted by Dwayne "the canoe guy" at 10:37 AM

Ummm...well gosh, this is just so tragic. But what really perplexes me, is why would Jonah have any experience with canoes, just because he hung out with the Apaches? I don't really think that Apaches and canoes GO together. There aren't a lot of birch trees or rivers in the desert.

So, Jonah was the one that winged old Stonewall? Oops.

I thought it was a pretty racist thing for Stonewall to say, but this IS the DC universe where there are huge waterfalls in the Louisiana bayous, you can ride from west Texas to Virginia in 12 hours on horseback, and there are snowcapped mountains in the panhandle of Oklahoma.

Heh. You make a very good point. The Hex landscape was indeed a strange and wondrous place.

I don't get why Jonah Hex is receiving much low ratings. It is rattling diverting, and has teemingness of activeness and shadow comedy. I've never read any of the comics, so I couldn't comparability it. Josh Brolin pulls an surprising execution as Book Hex. One night, Jonah's dominating official, Quentin Turnbull murders Prophet's phratry and brands his tackling with a hot implement.