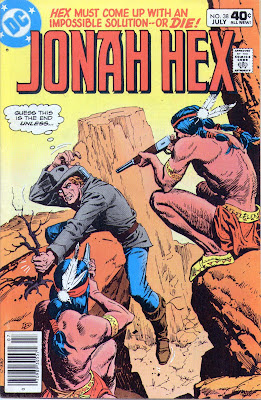 Jonah is riding along a river when he spots an Indian on a cliff across the river. The Indian is shot and falls into the river. Jonah jumps off his horse, strips off his boots and shirt and dives in, swimming across to save the Indian. Once Jonah pulls the Indian to shore, he recognizes the old man as Iron Dog, chief of the Cree tribe.

Iron Dog gives Jonah an old elk skin that has a map on it and then he expires. Just then Jonah finds himself surrounded by Hoby Callender and eight of his thugs. Hoby orders one of his men to take the map from Jonah. Jonah obliges by breaking the thug's arm and then tossing the map into the river. Hoby says that the map leads to a sacred Indian canyon full of gold. There is an old blind prospector in the group that verifies the truth of the story since he has seen the canyon himself.

Several of Hoby's men are ready to kill Jonah, but Jonah reminds them that he is the only one among them that has actually seen the map and has it memorized. Hoby agrees with Jonah and they strip him of his guns and then Hoby, realizing that one of his men now has a broken arm, shoots and kills the injured thug.

Once they are on the trail, Jonah asks the old prospector how he and the young boy managed to throw in with the Callender gang. The blind prospector recounts the story from 30 years ago how he came west to find gold. While he was prospecting, his mule wandered off. The prospector followed the mule across an old rope bridge and then into a green canyon where the gold was just sitting on the ground and there were veins of gold ten feet across running up the canyon walls. However, the Cree discovered him in their burial ground, stabbed out his eyes and drove him off their land. The prospector has been trying for years to find people to help him get back to the canyon, but nobody would believe his story. Hoby offered to help for 50% of the gold. The prospector said that last week he and his grandson had learned about the map and they were unable to convince Iron Dog to part with it.

Jonah tells the old man that he's a fool if he thinks that Hoby will split with them, IF they manage to get out of the canyon alive. Just then a Cree warrior takes aim from a rock high above the traveling group. Two shots later, two of Hoby's men are dead and now the whole gang is pinned down behind some rocks. Jonah says their only way out is for Hoby to untie his hands and give him his pistols back. Hoby says that is a fat chance of that and orders one of his men to go kill the two Cree that are shooting at them. Aaaand....

Hoby now sees that he needs to release Jonah but doesn't give him the pistols. Jonah sets out up the rocks, sneaking up behind the two Indians. He stabs one with a thrown knife and tackles the other one, throwing him off the cliff, but not before the Indian gets off a shot. Triumphant, Jonah grabs a rifle from the stabbed Indian only to find it is out of shells and of no use to him to go up against Hoby. The other rifle went over the cliff with its owner.

Two days later, the entire group arrives at the rope bridge the prospector told them about. They are suddenly beset upon by several Cree on horseback. Hex and the rest dismount and lean their horses across the bridge as fast as possible. Once Jonah, the old man, his grandson, and Hoby are across, Hoby pulls out a knife and cuts the ropes, sending the rest of his men and the Cree falling to their deaths into the canyon below.

They continue on, eventually finding some rock steps leading down into a canyon containing a burial ground. The grandson starts picking up nuggets but Hoby says they need to come to an agreement on how to divide the find. Then he shoots the old man and the grandson but his pistol shots start an avalanche. He and Jonah run for the canyon wall and Hoby pulls a pistol to kill Hex. Just then the grandson, with his dying breath, shoots and kills Hoby Callender.

Jonah climbs on out of the canyon, mounts his horse and rides off.

Statistics for this issue
Men killed by Jonah - 2 Indians
Running Total - 272
Jonah's Injuries - none
Timeline - This story covers about three days and could occur any time in Jonah's history.

This wasn't too bad of a story. I didn't care for Speigle's artwork. It seemed way too much like something found in very old westerns and Hoby struck me as a caricature, not unlike the Dick Tracy villains. All in all, it was pretty mediocre. 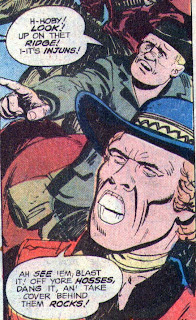 Next Issue - Jonah Hex and a Samurai. What else do you need?
Posted by Dwayne "the canoe guy" at 5:12 AM

I haven't read this one. I do find it a little on the unbelievable side that a burro would wander by itself over a rope bridge however.

Wait, you're finding something unbelievable in a Michael Fleisher Jonah Hex story!?!?!?!?!?!

"Why did the burro cross the rope bridge?"

"To bring harsh, violent blindness to its cruel owner."