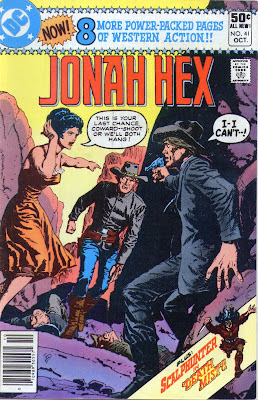 Jonah Hex #41 Oct 1980
"Two for the Hangman!"
Michael Fleisher, story - Dick Ayers & Tony DeZuniga, art - Luis Dominguez, cover
Opening this book the first thing you do is check the previous issue to be sure that you haven't missed something. This splash page starts with Jonah, dripping wet, hiding up in a tree. How the heck did that happen?! Well, the gang of crooks below him are jawing about how much fun it was to see Jonah & his horse get swept over that waterfall. (What is it with Jonah & waterfalls?)
Anyway as they are riding along, Jonah jumps out of the tree on the heads of two of them and then takes all four of them into town where he will pick up the reward. At the jail the sheriff explains that the outlaws will have a quick trial just as soon as their judge gets back into town from riding the judging circuit.
That night our story cuts to a large mansion outside of town. A buggy pulls up to the front door and the butler welcomes judge Harrow home. As SHE disembarks from the buggy she relates how difficult it is to dispense the harsh justice needed in the frontier. She has to set an example if there is to be any hope of taming the wild west and she has to fair and harsh since she is a woman and will be perceived as being to weak to handle the job. She then asks if Rodney is home and the butler starts to explain that Rodney is...

But the Judge interrupts him and says that she can guess that Rodney has been drinking again. We then meet Rodney, glass in hand, asking for an advance on his allowance since it will soon be his girlfriend's birthday. The Judge refuses the advance since it was "the floozy Vanessa's" birthday last month. Rodney starts to protest but the Judge says that if he wants money, he should go out and get a job.

Much later in town, Rodney is explaining to Vanessa that he can't get the money for the earrings that she wanted. Vanessa, floozy that she is, breaks down crying and Rodney swears that if there was any way that he could get the earrings, he would do it. Vanessa perks up because just that morning as she, during her normal floozy duties at the saloon, was taking dinner to the jail, she found a note in the returned tray explaining that the gang would give $10,000 to anyone that would help them escape. Rodney balks at the idea of committing a crime, but Vanessa, in her full-flooziness, shames him for being a coward and he goes along with the idea.

Does anyone see the disaster sitting in the road ahead? Sit down, Rodney, I'm sure that you don't see anything.
The next morning, Vanessa brings the prisoners breakfast and the deputy, in a flash of brilliance, decides to check the tray and finds a pistol that Vanessa has hidden there. Vanessa and the deputy start struggling over the pistol and Rodney comes into the jail. Vanessa screams for Rodney to do something and Rodney clubs the deputy with the butt of his pistol. But, clubbing deputies must be like eating potato chips, cuz Rodney just can't quit and kills the deputy in the bargain.

Vanessa frees the crooks and the crooks, Vanessa, and Rodney ride out of town.
Jonah is having breakfast when a man bursts into the dining room and shouts that the crooks have escaped and shot a man dead in the street as they rode off. Jonah grabs his hat to chase after the crooks because a town can sometimes hold back the reward money if crooks escape.
Several hours later, the gang finds a place to camp and when Rodney asks about the ten thousand dollars the gang leader starts laughing. Vanessa explains that she had to tell him something to get Rodney to help her and then it dawns on Rodney that he has been played a patsy. The gang leader explains that Rodney killed the deputy and now he'll be wanted for murder, so he won't be going anywhere.
Late that night, the gang has forced Rodney to cook for them. One of the outlaws takes dinner to their sentry only to find him dead a noose around his neck. Jonah steps out of the dark and buries a knife into the man's chest. The rest of the gang around the campfire hear a noise just in time to see Jonah jump from a ledge, shoot one gang member and kick the leader in the chest, but jarring the pistol from Jonah's hand. The leader jumps up and shots Jonah in the shoulder and start to gloat about finishing Jonah off. Jonah reaches for a nearby hatchet and swiftly throws it straight into into the leader's forehead.

Jonah turns just in time to see Rodney holding a gun on him, Vanessa by his side urging him to shoot Jonah. Jonah tells Rodney to hand the pistol over and Rodney does just that.
Less than a week later in Judge Harrow's court, the jury finds Rodney and Vanessa guilty of murder and the judge sentences them both to hang. Rodney starts crying, begging forgiveness but Vanessa chastises him to for once act like a man.
The next morning Jonah rides out of town past the gallows where Rodney & Vanessa hang dead.

Statistics for this issue
Men killed by Jonah - 4
Running Total - 287
Jonah's Injuries - Shot in the left shoulder and dumped over a waterfall
Timeline - None, a generic Jonah tale.
This one had some typical cliches and Jonah's part was fairly small. The main focus of the story was Rodney being played for a sap and we have seen that one before, especially with the overly harsh parent. I would put this one in the middle of the pack as far as quality. The axe to the head actually gives this one an extra point, it's always nice to see Jonah improvise when he's in a tight spot.

There was also a Scalphunter backup story, but we'll cover that at a much later date in the Scalphunter reviews.
Next Issue: A major turning point in Jonah's life as a new character is introduced and an old character returns.
Posted by Dwayne "the canoe guy" at 9:26 AM