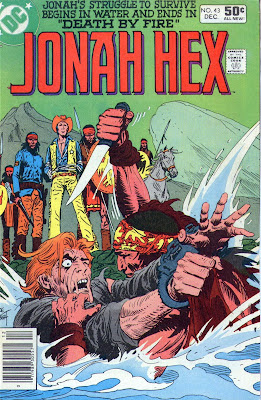 Part 2 of our 3 part epic opens with Marshall Hart looking at the body of Banker Jeffries while the murderers explain that Jonah Hex is the man that robbed the bank and killed Jeffries. Hart makes special note of the bullet wounds and then heads over to the jail to check in on the killer, Spast, that he caught last issue.

While at the jail, Spast tells Hart that his three brothers will be gunning for Hart. Hart shrugs it off and leaves the jail, only to find the aforementioned brothers waiting outside for him. They draw on him and Hart shoots all three of them in their gun hands and then loads them up in the jail.

Meanwhile, Jonah has taken the doc to the house where Mei Ling is. The doc announces that Mei Ling is only suffering from a sprain and bruise and that she'll need to use crutches for a few days.
Once the doc leaves, Jonah goes in and he and Mei Ling talk about their love for each other. Mei says that she will stay with Jonah forever, only if he gives up a life of violence. Jonah agrees but he says that he has a commitment to hunt down the killer of banker Jeffries.

Hours later, Jonah is searching for tracks but can't find any (probably because there are none, since the killers are still in town). Suddenly he has a lariat thrown over him and he is pulled off his horse. Marshall Hart got the drop on Hex and makes him drop his gunbelt and inspects his pistols. Seeing that Jonah only has his .44 Dragoons and his rifle, Hart mentions that the bullet wounds were of a smaller caliber. Jonah states that it's obvious that someone is trying to frame him. Hart decides to take Jonah in anyway to sort things out.

Meanwhile back in the jail with the Spast brothers one of them reveals a hollow heel in his boots and shows his brothers that he had gunpowder. They put the gunpowder in a cigar, tie the cigar to the bars in the window and manage to blow a hole big enough for them to squeeze through. 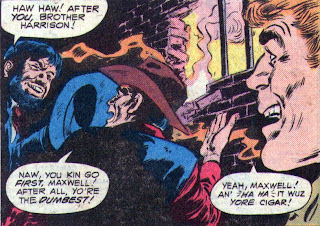 Back to Hart & Hex. Jonah is handcuffed and he and the Marshall stop at a river to get some water for themselves and the horses. They are suddenly set upon by several Apache. hart ends up shooting one in the head and Jonah battles one in the river, drowning him. Hart & Hex are overpowered and the Apache recognize the Mark of the Demon that Jonah bears. 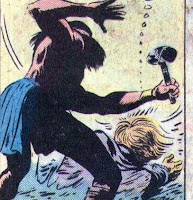 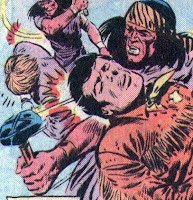 There is a three page recap of issue 7 and issue 8 covering Jonah's past and his scarring.

When they arrive in the Apache camp, the chief orders them tied up and burned at the stake. The Indians club the two men unconscious and tie them to a stake. Hex and Hart come to when the fire is blazing pretty well . Hart comes up with a way for them to escape. They gouge each others wrists until they bleed and the blood causes their rawhide bonds to stretch. Suddenly freed, Jonah & Hart beat the living tar outta the Indians with Jonah saving Hart's life.

The two run from the camp and jump off a cliff into the river below. Jonah ends up hitting his head on a rock, knocking himself out.

Hart pulls him to shore and the issue ends with the Spast brothers drawing a bead on Hart & Hex.

Statistics for this issue
Men killed by Jonah - 2 Indians
Running Total - 299
Jonah's Injuries - Knocked out 3 times. ouch!
Timeline - Well, it is right after the prior issue, so until we can determine when that was exactly, I'll have to leave this one blank.

Once again, Forton's artwork is so jarring that I have not been able to get into this book at all. The character of Hart hasn't aged well either. Hart is the stereotype of the TV cowboy hero, he only shoots the gunhand, he has a sweet aunt, he has some sort of younger brother. I'm convinced that the man doesn't have blood, he's so sweet he has syrup in his veins! I'm guessing that he was supposed to be a polar opposite of Hex, but fans wanted Jonah Hex,, the hideous bounty hunter. If they wanted J. D. Hart they could have picked up old copies of Gold Key westerns for crying out loud.

Next Issue: Jonah's dead, Hart's dead, Mei Ling is crying on a saloon floor and the Booth brothers (John Wilkes & Junius Brutus) get involved. Oh, and DeZungia is back. YAY!
Posted by Dwayne "the canoe guy" at 11:30 PM

Yeah, Hart was a bit on the...saccharine side, wasn't he?

Thanks to your earlier, inspirational post, I'm re-reading this run of Jonah Hex.

Despite a typically great Joe Kubert cover, the Hart angle just leaves me cold. He's like James Drury's Virginian, only without the mystery of what the heck his name is.