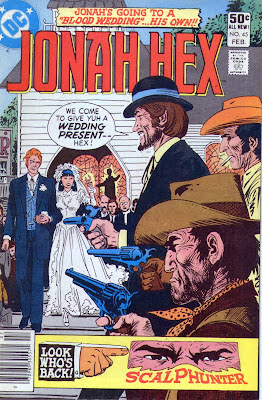 Jonah Hex #45 Feb 1981
"Blood Wedding!"
Michael Fleisher, story - Tony DeZuniga, art - Joe Kubert, cover
How come you didn't buy this one? It has a Kubert cover, DeZuniga art, Hex getting married and SCALPHUNTER TOO! (did I really need to capitalilze that last part? Guess so). You didn't buy it because you weren't born yet? Stinking comic noob, sit down and let me learn ya on this one.
This is the story that Jonah's life pivots on, everything after this will never be the same. This is the dividing line, the continental divide, the equator, the 19-ft fence around the nudist colony. But enough hyperbole, we have a wedding to attend!

The story opens with Jonah & Mei Ling in the general store picking out her wedding dress. A few of the local biddies...uh ladies...uh, women are lamenting the fact that the hideous scar faced bounty hunter would publicly show his "bestial lusts" but at least he hasn't stooped to marrying a negro. Jonah leaves Mei Ling so he can go over to the bank and sign the papers on the vacant farmhouse they are going to buy.

As Jonah is heading to the bank he is called out by a brother of a man Jonah killed a few years prior. The man, Mike, shoots Jonah in the left shoulder, knocking backwards into a horse trough. As Mike gets closer to Jonah, Hex jumps out of the water and repeatedly dunks and punches the man into oblivion, all the while noting that Mei Ling would skin him alive if she found out that he had killed someone the day before their wedding.

Later Jonah and Mei Ling ride out to her brother's, Mei Wong, place. Ling asks if Jonah got the papers from the banker and Jonah tells her he ran into a fella he used to know. Ling says that Jonah should invite him to the wedding.

When they show up at Mei Wong's farm, they meet his wife and go inside for tea. Wong asks if he can speak to Ling privately and takes her out to the garden. Wong asks why an Occidental is in his house and Ling explains that they are to be married. Wong explains that he has heard of Jonah Hex and the stench of death that follows him around. He says that if Ling marries Jonah, she will no longer be his sister. Ling leaves crying.

Meanwhile, Mike has been carried by his buddy Luther back to a cabin in the woods. There Jake, the leader of the gang learns that Jonah is getting married tomorrow and they decide to help Jonah settle down.

Back in town, the local biddys have descended upon the poor banker, explaining that if he makes a mortgage for Jonah Hex, they will pull all of their money from his bank. Banker Jarvis vouches for Mei Ling, who he describes as "an attractive and thoroughly well-bred young lady", and Jonah who has stated that he is quitting bounty hunting. Nevertheless, the women add to their threat by saying that all of their friends will withdraw their funds as well, leaving Jarvis wiping his brow in worry. 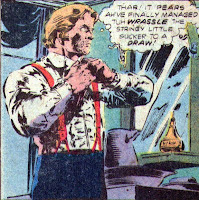 Sunday morning rolls around to find Jonah getting dressed in a suit, thinking about what his paw would say, and then heading out for the church, leaving his pistols in the hotel bed.

At the church, packed to the gills, the priest (pastor?, not sure of the denomination of the church) notes that the only reason the place is full is because of the wedding of Jonah Hex (Side note: I don't know if it was customary to get married during a regular service, but I know that this wouldn't happen today).

The wedding goes off without a hitch, Jonah and Ling both exchanging their vows. However, once they are pronounced man & wife, before Jonah can kiss his new bride, a man bursts into the church shouting that Jake McCafferey and his gang have dumped kerosene on six buildings in town and unless Hex comes out, they'll burn the town down.

Jonah tells Ling that he'll keep his promise and won't fight but the townsfolk are up in arms. Their town will be destroyed because of his promise. Hex is adamant and even shows that he has no pistols. The messenger produces the pistols because he stopped by the hotel to pick them up. Jonah tells Ling that he won't fight is he can't help it, but he can't let the town be destroyed just because of him. He straps on the gunbelt and walks out of the church.

Outside, the gang starts heckling Jonah but he explains that he just got married and is in a good mood. Therefore they have five minutes to leave town. Since the gang has a major stupid gene, they start insulting Mei Ling, calling her a coolie, a cheap saloon tramp, and that she has round heels. Finally one of them says they were mistaken, it was Jonah's MOTHER that was the tramp. Then.... 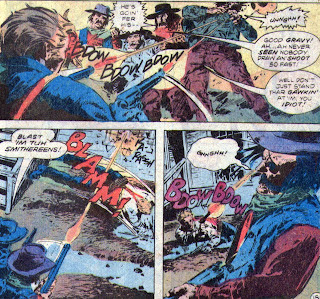 Four men dead and Jonah covered in mud, Mei Ling nevertheless runs out to be sure her husband is well. Jonah apologizes to her as she tells him she loves him anyway. Banker Jarvis walks out and Jonah says that he would gladly take the keys to the ranch they were going to buy, but Jarvis, under the gaze of the biddys, states that one of his associates sold that place earlier. Jonah starts to go off on him, but Ling says that it isn't important. Jonah agrees and they head out of town, Jonah saying that he never wanted to live around there anyhow. 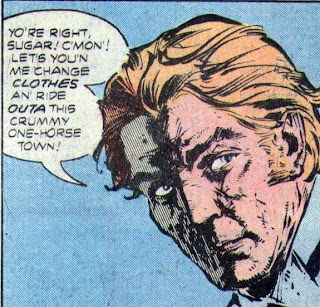 Statistics for this issue
Men killed by Jonah - 4
Running total - 307
Jonah's Injuries - shot in left shoulder
Timeline - Well, we'll have to come BACK to this once we get some more information, but it appears to be 1874-1876. This story covered two days. (this becomes important later on when we try to count backwards to place some dates.)

A really good story with several nice elements. First we have the prejudice of the women of the town, judging Jonah and Mei Ling both by their appearance, next we have the prejudice that Mei Wong displays to the extent of disowning his sister. Is it narrow-mindedness or pride on their parts? Probably both, pride in the their town and pride in the family name of Mei. Oddly enough, Mei Ling is now an outcast in to worlds, the west and her family, not unlike the outcast that Jonah Hex himself is.

One last thing, Chinese names put the surname first, so Mei Ling's family name is Mei and her first name is Ling. I will probably refer to her as Mei Ling (mostly to help searches land here) but most of the time I'll refer to her as Ling.

Next Issue: The happy couple goes house hunting, so somebody is gonna end up dead.
Posted by Dwayne "the canoe guy" at 2:50 PM

Oh yes, the wedding.
You have to give Jonah credit for trying.

This is one of the few Hex issues I own outside of some trades. It was in a box my grandpa got me at a yard sale, tucked in between a bunch of early eighties SWAMP THING and several random issues of PLANET TERRY, STRAWBERRY SHORTCAKE and EWOK ADVENTURES.

I remember reading it at age ten or eleven and being very bored by all the adult stuff and then picking it up again when I was probably fifteen or so and being blown away with how good it was.

Especially compared to whatever over-rendered, brightly colored crap I must have been reading in '94.