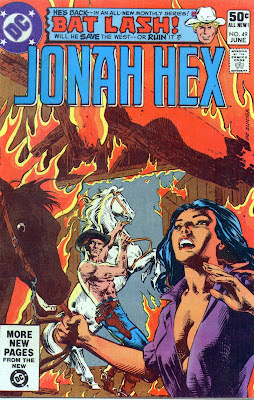 The corn is all picked and stacked in the cribs (therefore we know that the Hex's have been farming for at least 85 days, so figure in another couple of weeks for plowing and planting) and Jonah and Mei Ling are gazing upon the fruits (or vegetables) of their labors. Ling thanks Jonah for keeping his word for all this time. She asks if it has been worth it and he says he wouldn't have done it if it wasn't worth it.

She asks if they can take the rest of the day off and Jonah rolls and lights up a smoke, saying that he has to get the corn into bushel baskets to take to town tomorrow. They have a $6,000 ($108,802 today) mortgage that has to be paid off tomorrow. Mei Ling says that she is going to take all of her clothes and go skinny dipping. Jonah tosses his cigarette over his shoulder and runs after her. Mei Ling is in the pond and Jonah is just getting ready to remove his drawers when Mei Ling notices smoke. 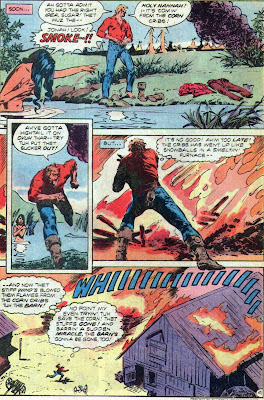 The corn cribs have caught fire and are a total loss by the time Jonah arrives. Not only that, but the fire has spread to the barn! Jonah rushes in to the barn and manages to pull out the horses and and some of the tack. Mei Ling is beside herself since the corn was going to pay off their mortgage. Jonah says that there is no reason to get upset and that is when Mei Ling realizes that Jonah caused the fire when he flipped his cigarette into the corn crib. She accuses him of starting the fire on purpose.

Jonah tells her that she is having a hissy fit and that he'll get the money and he'll do it without his guns. He shows her that he doesn't have his pistols and that they are in the dresser drawer and she can go look if she doesn't trust him. Mei Ling apologizes for not trusting Jonah and watches as Jonah rides off. Ling goes into the cabin, feeling cold and sick. She opens up the dresser to get a blanket and finds that the pistols are gone! 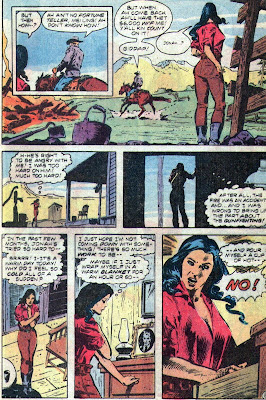 Jonah heads into town and visits the sheriff to pick up some wanted posters. Back at the farm Mei Ling is throwing up into a wash basin and decides to go visit Doc Pedersen.

Quite some time later, Jonah walks into a stage depot and calls out Nate Clinton. Clinton turns and fires but Jonah guns him down.

Mei Ling shows up at the doc's house to find out why she has been sick.

Elsewhere, several outlaws are riding down a narrow trail when their horses suddenly trip on a rope stretched across the trail. Jonah jumps out of a tree onto the leader of the outlaws and takes them all into custody.

Later that night, Jonah shows up outside a cabin and while he is being shot at by the outlaws inside, he manages to lob several sticks of dynamite down the chimney.

Much later Jonah arrives home and drops $6,000 onto the dining room table. Mei Ling asks where he got the money and Jonah states that he got a few odd jobs. Mei Ling doubts the possibility of that and Jonah fesses up that he grabbed a few bounties. Mei Ling suddenly blurts out that she is pregnant and Jonah starts stuttering. Mei Ling tells about her trip to the doc and asks if Jonah is happy. Jonah says that this never happened to him before and of course he's happy. We close the story with...

Statistics for this issue
Men killed by Jonah - 2
Running Total - 325
Jonah's Injuries - none
Timeline - Well, we know that it has been about4 months (at least) since they started farming (not since they got married). We'll be able to walk backwards in time pretty soon, just stick with me.

Not much gunplay action in this story (it's a short story since we also get a Bat Lash backup story) and I have quite a few problems with the logistics of this tale. Once again it centers around how quickly things catch fire. I find it hard to believe that picked corn, which is covered with green husks and has a high water content, will cause such an inferno by having one small cigarette tossed amongst them. Also the speed with which the fire spread was pretty unbelievable. About the only thing this story did was tell us that Mei Ling is now pregnant.

However, I did enjoy the story for no other reason than we get to see Jonah being a little bit playful with his wife.

Also, did anyone see that the barn (that burnt down earlier that day) was still there in the last panel? I attribute this to the fact that Mei Ling is also Amish.

Next Issue: The snow flies, the fur flies, and the women are thicker than flies.
Posted by Dwayne "the canoe guy" at 12:19 PM

See? Mei Ling is good for something! While Jonah was out gunning people down, she rebuilt the barn!

As I am not a woman, although I play one on tv, I'm impressed by the unbuttoned blouse covering Mei Ling on the cover.

PSS coming to this blog inspired me to create my own blog. My how desperate that sounded.

BA, thanks for dropping by. If ya think that unbuttoned blouse is something, you ain't seen nothin' yet.

Thanks for the heads up on the broken linkylink

I'll be sure to check out your blog