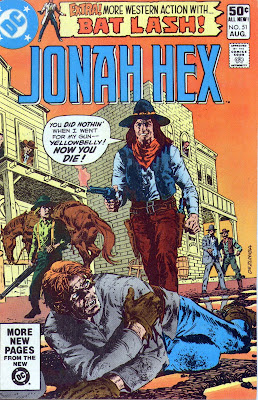 Jonah is wanting to head into town but Mei Ling is reminding him that the baby is due at any time and she is wanting him to stay home. Jonah is having the same problem I have, being alone when I'm trying to buy a surprise for my wife. Take this for example. My wife saw a ring she wanted at the store and hinted that she wanted it. While she was wandering around the mall I managed to sneak back into the store and buy the ring. I had the clerk hold it for me because I KNEW that my wife would want to swing back by, look at the ring and hint once again that she would like it. If the ring was gone, then she would demand that I empty my pockets to prove that I didn't have it. I also told the clerk to lie about me coming back in.

Sure enough, my wife wanted to look at the ring again and when it was gone she started asking if they could get another one in. The clerk waiting on us was different than the one I dealt with and she kept looking at me really weird. She finally said "A gentleman purchased the ring earlier and had it placed on hold. Let me look at the number and see if we can order another one." She brings the ring out and it HAS MY NAME ON IT! My Lovely Wife is looking at something else and I'm trying to shoo the clerk away when suddenly, out of nowhere, the original clerk snatches it out of her hands and elbows her aside. Lovely Wife turns around and the clerk who helped me says, "I'm terribly sorry, but the gentleman who put the ring on hold had us deliver it not 5 minutes ago and the paperwork won't be back with the courier for about another 2 hours so there is no way for us to determine if we can order another one of those rings."

Lovely Wife glared at me as if something was up, looked at the clerk and totally bought that lying man's story.

Wait, this is supposed to be about Jonah. Okay, I'm back on track. Jonah is trying to get into town to purchase a comforter for Ling and the baby and he finally gets his way. Meanwhile in town, a horrible hardcase shows up and starts terrorizing the local bar, saying that he's waiting for Hex in order to kill the scar-faced former bounty hunter. A bunch of kids gather at the door of the saloon to see the ruckus and one young fella, Petey, starts laughing at the idea of Hex being outgunned by this slimeball. Needless to say, said slimeball don't cotton to being ridiculed.

Jonah arrives in town and picks up the comforter at the general store and the sheriff walks in, warning him about the dirtbag at the saloon. Jonah says that he is heading home and won't have any of it. When he steps out of the store, the weasel is standing there, calling Jonah out. Hex tells him that he isn't carrying 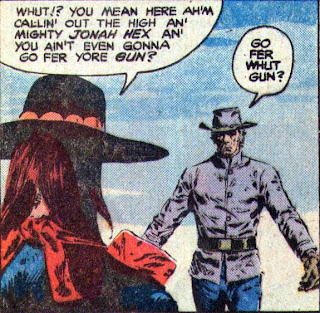 and the trashbag tosses Jonah one of his own. Hex pitches the gun to the ground and walks away, the weaselly-slimeball-dirtbag calling him a coward and the townspeople aghast that Jonah has turned tail.

Jonah spend the next hour at a cafe, not eating the meal he ordered and having a flashback.

April, 1848. Woodson Hex takes his son to the fair. Woodson, being the drunken bastard that he is, wants Jonah to enter a boy-fighting contest. 25 cent entry, $10 prize for going three rounds. Jonah says that he just turned 10 and the other kid looks a lot older. Woodson asks if he has raised a coward and Jonah gets into the ring.

At the sound of the bell, Jonah lunges for the other kid but gets the living snot beat out of himself in the first round.

Woodson goads Jonah back out for the second round, even though Jonah is begging for it to stop. At the start of the second round, Jonah gets a quick one to the side of the head, an uppercut and then a ten count as he lays there, bloody, dazed and battered. Woodson drags Jonah from the ring and starts slapping him and calling him a coward. A worthless coward.

.....
Hex looks at the clock in the cafe and realizes he better be getting on home. Petey meets him in the street and asks if it's true that Jonah is a coward. Petey is beaten up and just then the weasel shows up. Jonah asks Petey if this is the guy that gave him the black eye. Petey says that it is and Jonah swiftly drops the weasel with three hard punches.

Hex turns and starts walking away but the weasel draws and shoots Jonah as he is picking up the dropped comforter. Jonah goes down and Petey sprints for Jonah's horse. With the weasel standing over Hex, ready to finish the job, Hex throws the comforter into his face and Petey tosses Hex his rifle. When the weasel pulls the comforter down, he's staring down the barrel. And, of course, it's the last thing he ever saw. 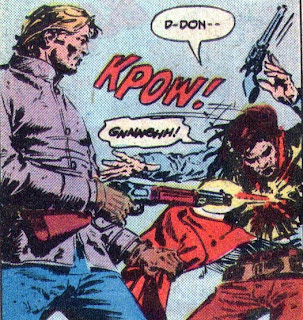 Jonah gathers up his stuff and rides back home. The doc and his wife are there and Jason Woodson Hex is snuggled in bed with his mom. Jonah apologizes for not being there and Mei Ling says that it doesn't matter. Jonah gives her the comforter and she wraps Jason in it. Jonah picks up his boy and asks if he has anything to say to his paw. Jason replies... 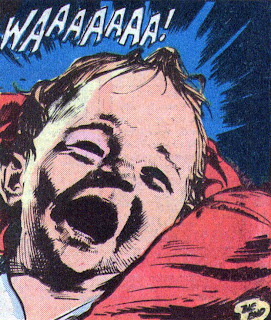 I've read that when folks are trying to determine things like timeline and what not, they use a date that was stated most of the time and work other dates around that, determining that references to incorrect dates were just mistakes. Jonah's dates have always been 1838 - 1904, but almost all of his childhood flashbacks are when he 'just turned 10' and it's in the spring. Do we go with the bulk of flashback references or the given birth year? Or do we do what my wife suggests "It's a comic book. Let it go. Or get off your butt and find the guy that wrote these and see what HE says."?

Anyway, a nice story with a flashback to abusive Woodson. It kinda explains why Jonah was such a sadistic bastard towards Blackie and Mange and why he let the dogs eat the circus owner in Jonah Hex #1 Vol 2. My only complaint is that Pappy Hex looks different every time we see him. And we have seen him a lot. It's also a short story because of a Bat Lash backup feature.

Next Issue: kidnapping, sucker-punching, wife-slapping and it all ends with Jonah getting blown all to hell.
Posted by Dwayne "the canoe guy" at 12:34 PM

I never heard that ring story, glad to know you picked up some of my deviousness throughout the years

BUT DID SHE LIKE THE RING? You can't leave us hanging! Oh, and kudos on your machinations.

I must admit that I take your lovely wife's advice about the dates. I try not to worry about it.

Jord, I think you have things a little backwards about who picked up what from whom.

Sally, yup, she liked the ring, she picked it out!