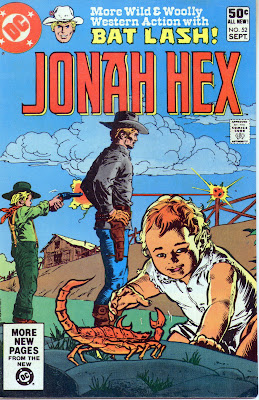 Petey is helping Jonah load a wagon full of hay. Jonah thanks Petey for saving his skin last month and Petey starts talking about growing up to be a gunfighter like Jonah. Jonah gives him a couple of pointers, like standing with your back to the sun showing only a profile. Just then Mei Ling comes out and asks Jonah if he & Petey can keep an eye on Jason while she finishes making some preserves. She lays Jason on the ground in the shade and the guys get back to work.

A short time later a scorpion crawls up and stings Jason. Jonah runs over and realizes what has happened. He quickly pulls the knife, cuts the wound and sucks out the poison. He does note that a scorpion wouldn't kill a grown man but a month old baby is a different story. Jonah then takes the baby into the house and Mei Ling asks what happened. Jonah tells her and she accuses Jonah of not watching the baby, of wasting time teaching Petey how to be a gunfighter (since she caught him earlier).

She goes into a rage, accusing Jonah of lying about Petey, lying about killing the bastard in town a month earlier, accusing him of killing their baby, then she lunges at Jonah resulting in... 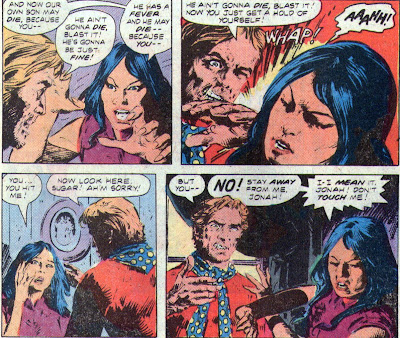 SMACKDOWN!!
Meanwhile in town, three good-for-nothings walk into the undertakers shop. They say they want to buy a coffin to bury a pig in. A pig named Jonah Hex!! They stick a gun in the undertaker's mouth and ask how to get to Hex's place, since Hex killed their brother about a month ago. The shopkeeper draws them a map and they head out for Hex's place.

Once they get there they see Petey and think that since Jonah has a kid, Petey must be Jonah's son. When Petey rides off to go home, they ambush him and kidnap him.

The next morning Jonah is trying to talk to Mei Ling when Mrs. Foster, Petey's mom, shows up. Petey hasn't made it home. She said that Tim Baxter came by her house earlier to say that he thought he saw Petey riding off with three rough looking men. Jonah grabs his pistols and starts strapping them on and Mei Ling asks him what he thinks he is doing.

Jonah tells her that he is going to get Petey. Mei Ling says that it is a job for the sheriff but Jonah says that Petey could be dead by the time the sheriff gets involved. Mei Ling asks how can he leave Jason. Jonah heads for the door and she says that when he gets back, she and Jason will be gone. Jonah rides off as Mei Ling shouts after him.

Later on Jonah is able to pick up a trail that has one horse with a loose shoe. Jonah follows the trail into town and rides up to the blacksmith. He finds a guy getting his horse re-shoed and without another word beats the holy living crap outta him. 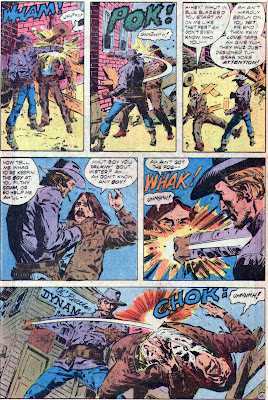 The guy confesses that his brothers have Petey in a cabin outside of town. Jonah has the blacksmith get the sheriff and lock up the kidnapper and heads off to rescue Petey.

Jonah finds the cabin with no problem and kicks in the door. The cabin is empty and dinner is even cooking on the stove. In the rocks above the cabin are Petey and the remaining two kidnappers. They chortle about leaving their brother behind to steer Jonah into their trap and they grab the plunger, slamming it down and blowing the cabin all to hell!

Statistics for this Issue
Men killed by Jonah - none
Running Total - 329
Jonah's Injuries - None
Timeline - One month since last issue and this story covers one day and part of another. Spring of 1876 by my estimation.

A short story since there is a Bat Lash backup and it is just a setup for next issue when things really start cooking along. Mei Ling comes out being a total shrew and I really wish we could have had about 3 months of her being sweet before going off on her man, but these are comics and the story has to keep moving.

Next Issue: What issue? Jonah is dead. Dead dead dead. 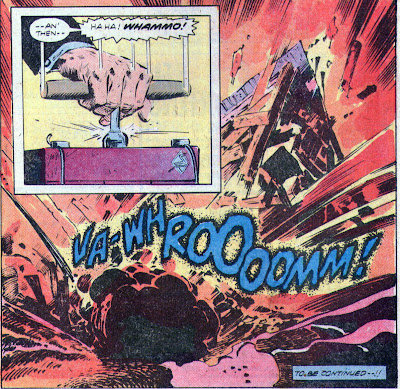 Ha ha, fooled ya! Next Issue: Jonah saves Petey and faces off against El Papagayo, Quentin Turnbull, Woodson Hex, The Chameleon, and God!!!
Posted by Dwayne "the canoe guy" at 9:16 PM

I do believe that this was the issue where I decided that Mei Ling was completely nuts. Either that, or suffering from one HELL of some Post Partum Depression. Or something.

She's the one who dumped the baby outside, by the way.

Other than Mei Ling's freaker-outery, we get a "warm and fuzzy" feeling--at least as much as a Jonah Hex story can give a warm and fuzzy feeling--when he and Pete are bonding, with Jonah giving Pete shooting tips.

I also found it disconcerting when Mei Ling could only muster a "Oh, no!" when Pete's maw came over all teary about Pete's not coming home. Mei Ling's the type of gal who can only...ah, I'm sick of her already!