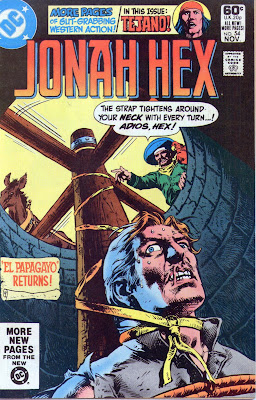 With no mention whatsoever of Mei Ling walking out on Jonah and taking Jason with her, we start our story with Jonah getting a nice hot bath at Rosie's (wherever that may be). In the midst of his bath, two hardcases walk in, threatening Hex. Jonah grabs the scarf on one, pulls him into the tub and then stabs him. Using his dead body as a shield, Jonah then grabs the dead man's pistol and pushes a couple of slugs into the other man. Then, to the amazement of women comic bloggers everywhere, Jonah stands up in the tub and comments on the pistol he stole from the dead man. 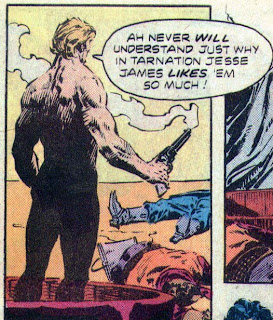 Of course, causing so much carnage and bloodshed has its consequences. Jonah gets charged $2 to have the floor cleaned and gets kicked out of Rosie's. Later riding into town with the two dead men, Jonah Hex is recognized by a bystander who races off to send a telegram to Richmond, VA.

In Richmond, Quentin Turnbull is talking to the Fort Charlotte Brigade and is asking for positive proof that Jonah Hex has been blown up by the dynamite trap laid for him. This, of course, goes against the LAST time we saw Turnbull which leads me to think that this story arc is out of order with the marriage storyline and makes me wonder why we have fill-ins thrown in here. Each story in the marriage arc were short ones (except for issue 50) so I would have thought that Fleisher could have kept up the pace. Now I know how Joss Whedon felt.

While Turnbull is gloating that Hex is dead, Solomon walks in with the information from the telegram, stating that Jonah Hex is alive and in Clementine Springs. Turnbull assigns the four members of the Fort Charlotte Brigade to kill Hex, for sure this time.

Jonah checks into the hotel and heads up to his room after dinner. A mysterious stranger follows him and attempts to open the door to Hex's room to only be surprised by a pistol to the back of his head. The stranger turns and it is Col. Sanchez of the Mexican Army. Hex invites Sanchez into his room and Sanchez unfolds a story, explaining how El Papagayo is still alive, despite being stabbed and left for dead. Sanchez explains that the President of Mexico is willing to pay $10,000 for the bandit, dead or alive (thus allowing Jonah to dirty the floor at Rosie's 5,000 times and not be in the red.)

Jonah takes him up on his offer and heads for the border. 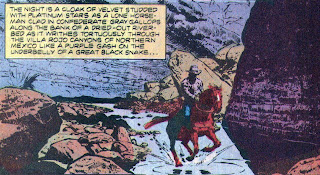 Much later, high on a cliff overlooking a lone rider, two of El Papgayo's men open fire on the rider. When they inspect the body, they learn that it is only a stuffed dummy and that Hex has the drop on them. Jonah ties them both up, disguises himself as a bandit and rides on into Papagayo's lair. However, all of this has been closely watched by a lookout, who quickly rides to warn the bandit leader.

Jonah rides into the old fortress and walks into Papagayo's HQ where the bandit wastes no time in unmasking Jonah and taking him prisoner. Papagayo decides that he will kill Jonah slowly but, as usual, things start with a rifle butt to the head.

When Jonah awakens, he is at the bottom of a dry well, strapped to a pole and bound with rawhide. A mule is slowly turning the pole and as it twists, the rawhide starts to strangle Hex. Jonah manages to grab his knife and cut his way loose and then use the knife to create handholds so that he can climb from the well.

El Papagayo is not an idiot, he has left a guard in case Jonah escapes and as Jonah pulls himself over the edge, the guard draws a bead and suddenly.... dies. He is knifed in the back by Carmelita, El Papagayo's main squeeze who also works for Col. Sanchez. She and Jonah escape in the cover of night.

Later, after she has shown Hex the way out, Carmelita starts to return to El Papagayo in order not to blow her cover, but just then....

Statistics for this issue
Men killed by Jonah - 2
Running Total - 333
Jonah's Injuries - Knocked out with a rifle
Timeline - Like I said before, this one must be a filler since it makes no mention of Mei Ling (which Turnbull was aware of) and assumes that Turnbull still thinks Jonah Hex is dead. Based on what happens next issue, I place this one in 1875.

I have always liked El Papagayo and it is almost unbelievable that we have gone 44 issues without seeing him. It's a shame that the timeline was so screwed up because I could see the Parrot using Jonah's marriage to his advantage by kidnapping Mei Ling, but then, Turnbull beat him to it and to reuse that plotline would have been a poor choice.

This also had a backup story of Tejano

Next Week: El Papagayo, The Fort Charlotte Brigade, and a river ferry that doesn't crash apart on the rapids! No, really.
Posted by Dwayne "the canoe guy" at 11:00 PM

I've always wondered just how many henchmen old Turnbull went through in his attempts to kill Jonah.

Papagayo would have made an excellent Batman villain, due to his fondness for elaborate death traps, instead of just going over and shooting Jonah in the head.

And THANK YOU so much, for that lovely shot of Jonah's nekkid behind. You really know how to treat a crazed female blogger!

Yeah, but why is that nekkid behind in shadow? Heck, the average Green Lantern shows more tushy while fully clothed!

Ah, that's what highlights are for, Sea.