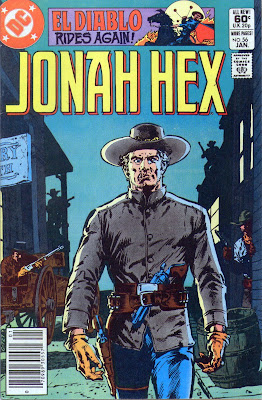 Jonah is sitting near the camp fire, having a cuppa' joe, when a young woman comes running up, begging for help. She throws herself into Jonah's arms and says that THEY are trying to take her back. Just then three men in uniforms come up and start dragging her away. Jonah protests and one of them busts Jonah in the jaw and another one follows up right behind. Jonah starts busting some heads himself when there is a loud shout, demanding to know what is going on.

The man demanding an answer is Dr. Philip Rondine, director of the Desert Haven Asylum for the Insane. The three men are employees of the asylum and were trying to return the woman to the hospital. Rondine explains that the woman is Susan Crenshaw is crazy and had been committed but had recently es 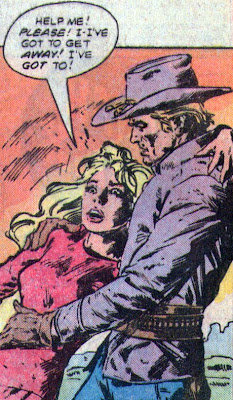 caped. Rondine and his thugs take the woman away with them.

Jonah contemplates how terrible that a pretty woman would be so sick and have to locked away in a snake pit such as the asylum. As he readies his horse, he plans on heading to Desert Forks to find a hotel, and he's not accustomed to being alone after being married for over a year to Mei Ling.

Several hours later, Jonah is killing roaches in his hotel room and trying to shave when he hears a noise at the door. He jerks the door open, grabs the man standing there and throws him into a chair, offering to do some major damage with a straight razor unless the man starts talking.

The man stammers out that he is Herbert Crenshaw. His wife, Susan, was the daughter of Arnold Middleton, a rich mine owner who recently died. Susan inherited controlling interest in the mining empire. However, before she can claim her inheritance, her uncle (Virgil Middleton) has had her committed until she agrees to sign over everything to him. 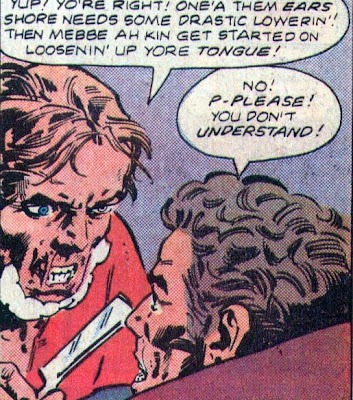 Crenshaw wants Jonah to break her out of the asylum and Jonah says that they can discuss details over dinner. As they walk out of the hotel, gunfire breaks out and Crenshaw is hit in the arm. Jonah knocks Crenshaw down behind a water trough for cover. He hands Crenshaw a pistol and tells him to fire a shot at the roof across the street and Jonah will sneak up on them.

Jonah heads out across the street but a gunman on the ground ambushes him and hits Jonah in the right thigh. Jonah goes down but manages to kill his shooter. He hobbles across the street and finds a ladder to climb up the side of a building. Jonah then jumps out of a window onto the nearby roof, planting both boots into one owlhoot's face. He then gut-punches the other one and lifts the screaming man over his head, then throws him into the street, knocking the third gunman off his horse.

Back down in the street, Jonah asks Crenshaw if he knows who these three are. Crenshaw identifies them as Virgil Middleton's henchmen. Jonah agrees to take the job, right after he bandages his leg and gets some grub in his gut.

Later that night at the asylum, Susan is undergoing a torturous water dousing as Virgil attempts to get her to sign over her rights. Jonah is hanging from a rope outside the second-story window. Using his knife, he manages to pry the screen off of a window and swinging in, smashes a guard in the jaw. Two other guards come running along a balcony and attack Jonah.

During the tussle, Jonah and a guard crash into the railing and fall to the ground in front of Virgil Dr. Rondine and another guard. Dr. Rondine is there and pulls a gun on Jonah. Jonah spots some buckets of sand (for dousing fires, sez so on the sign) and grabs one, tossing sand into Rondine's eyes and knocking out the other guard with the bucket. Jonah then locks Virgil and Rondine into a cell, grabs Susan and they both head outside, making for horses that Jonah has brought.

When they get to the horses they are surprised to find Susan's husband, Herbert holding a pistol. Herbert explains that he never loved Susan, he just married to get his hands on her father's money. But his plans hit a snag when Virgil had her committed and was going to have their marriage annulled. So Herbert had to hire Jonah to save her and now he plans on shooting her with one of Hex's pistols and then killing Jonah 'in self-defense'.

Jonah tells him that he'll never get away with it, but Herbert orders Jonah to hand over his gun. Jonah does as he's told, holding his other hand over his head (in order to reach his knife that he keeps in the back of his jacket). As Jonah hands over his pistol, he suddenly throws the knife into Herbert's chest, killing him. 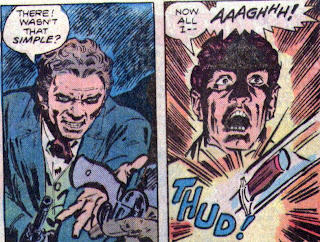 Susan cradles her dead husband in her arms and tells Jonah that he killed him. Jonah replies that he did and has mixed feeling about the whole thing, because with Herbert Crenshaw dead....

Statistics for This Issue
Men Killed by Jonah - I'm calling it three. The one shot in the street, the one thrown off the building, and Crenshaw.
Running Total - 341
Jonah's Injuries - Shot in the leg and falls off a balcony
Timeline - This one happens right after issue #53 covering one day.

I enjoyed the idea that two family members were out to get Susan's money and their plans ended up colliding. Jonah was taken for a fool, but honestly, there was no way for him to determine that Crenshaw was a slimeball. The rest of the story was just wall to wall fist fights, and that is never really a bad thing.

This also had an El Diablo backup story.

Next Week - Jonah encounters one woman that he can never forget...Ginny Hex!
Posted by Dwayne "the canoe guy" at 6:00 AM

This sounds good. Although I'm not sure that her uncle would have right to have her committed, wouldn't her husband have assumed those rights after he married her? The sad thing, is that it was perfectly legal for a father, husband or guardian to have a woman committed for any reason at all, because women didn't have any legal rights of their own.

Poor Jonah. Crazy women just keep stumbling out of the dark and into his arms ALL the TIME!

The cover of this one and #67 are strikingly similar, right down to the teal(?) colored background.

Yes, a good action issue with that nice plot twist. Not bad for what is a fill-in issue of sorts.

Wow, good call on the covers C.K. I never noticed it.