Okay, a touch of quick explanation. Harvey comics published this comic called Bunny that had a horrible backup feature called Fruitman (he can turn into fruit). They decided to take all of the Fruitman stories, gather them into a Giant and sell it. But they also tossed in another story of Sooper Hippie which is one of the most sexualized things I've ever seen in a Harvey book.

Here, Sooper Hippie (in his secret identity with the red hair) gives his friend some advice about playing the zither and the friend responds... 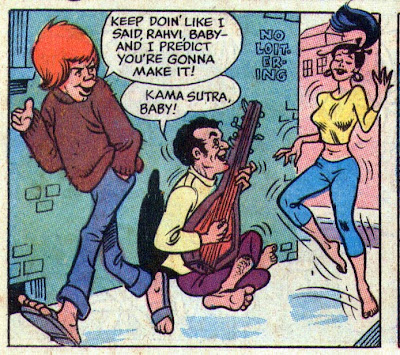 Uh...Kama Sutra? A book about Eastern sexual positions... in a HARVEY book???? Especially one called Fruitman Giant????!??! Okay, so how do I get that horrible taste outta my mouth?

Later on, Sooper Hippie goes to Mars to battle Mary Boppers and makes this comment about his x-ray vision.

This is just all tooo creepy for a Harvey book. These are the folks that put out Little Lotta and Casper for crying out loud.
Posted by Dwayne "the canoe guy" at 6:04 AM

Geez, this is almost like early Mad Magazine stuff. Still funny, though. :-)

Too much Caspar and Richie Rich can make a writer go nuts, apparently.

Next week is even MORE of the Harvey madness