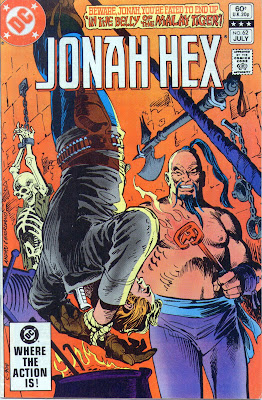 Jonah is stuck in a dead end, several Chinese guards ready to gun him down when another guard comes running up, shouting to the leader of that group. The guards lower their rifles and then take Jonah prisoner, hauling him before the Emperor himself.

The Emperor speaks English and tells Jonah that he knows of the plot, but they cannot locate his female helper. Jonah plays dumb but that gets him a rifle butt to the shoulder. The Emperor says that Jonah will get a quick death if he tells where Mei Ling is. Hex says she has already escaped so the Emperor has Jonah taken away for some quality torture time.

Meanwhile, Mei Ling is trying to get back to the harem and is discovered by a wandering guard. The guard starts to take her into custody, but Mei Ling starts using her feminine wiles, untying her top. When the guard grabs her and embraces her, she grabs his knife and appears to stab him in the back (but she probably doesn't since she leaves him bound and gagged.) 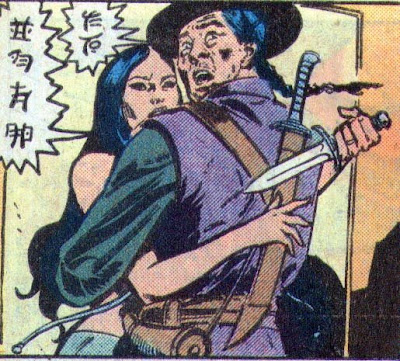 Down in the torture chamber, Jonah is getting the living daylights knocked outta him. Then he gets hung by his heels and the torture-master grabs a hot poker. Right before the poker hits Jonah's face, he grabs his knife and throws it into the dungeon master's chest. Just then Mei Ling bursts in and... 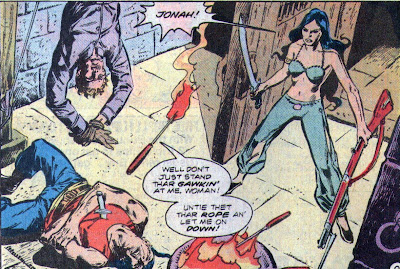 .. makes me think she's a really hot sword-wielding, rifle-toting Asian harem girl. (Let's see how many google searches THAT brings). She and Jonah start making tracks, but sadly the rifle is a muzzle-loader and has only one shot. Before they can get captured, Jonah tosses a huge urn over the balcony, tells Mei Ling to hang on and they use a chandelier to make their getaway. 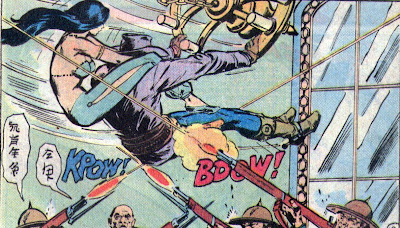 Once they are out in the palace grounds they realize that they have gone from the frying pan into the fire because the Emperor has a pet snow leopard. Jonah grabs his knife while Mei Ling heads for a tree. 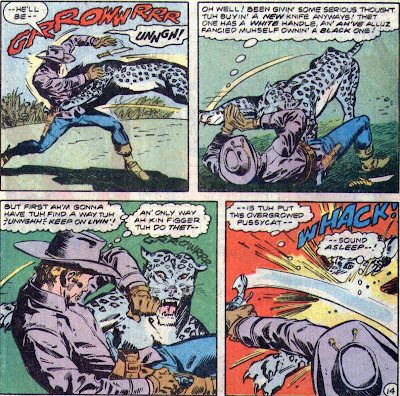 Yeah, pistol-whipping a snow leopard was an Olympic sport in 1875. With the big cat dispatched, Jonah leaps off the wall carrying Mei Ling. Later in town, the couple is hiding in an alley when they are approached by a large man named Barnaby Sledge. Sledge takes them to his mistress's house.

Jonah explains that they are being pursued and that they are looking to get back to the states. Sledge offers them a ride on the Malay Tiger, the ship he works on. 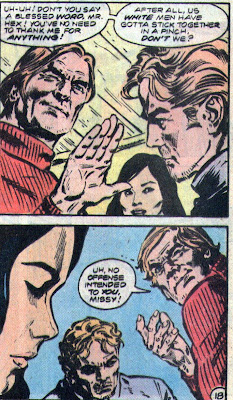 Sledge gives Hex and Mei a room for the night (it would be safer traveling at night since they are fugitives) and once they are alone, Mei Ling says that Sledge scares her. Jonah states that they have to trust someone and asks if HE scares her as well. Mei Ling whispers that Jonah scares her as well and while the couple kiss passionately, Sledge is seen peeping through a curtain, watching them (Perve!)

That night Sledge smuggles the couple out of town, hidden in a wagon and as dawn breaks they come to the ocean where the Malay Tiger is anchored off the coast.

Meanwhile, the Emperor has had his forces invade the palace of the White Lotus and as the palace falls under the superior army, the Warlord commits suicide and Phat makes his escape, swearing vengence on Jonah Hex & Mei Ling.

Much later, Jonah & Ling are in the hold of the ship and Jonah is poking around the cargo (which is supposed to be silk). He pokes one of the bags with his knife and a powder falls out. Mei Ling recognizes it as opium and tells him to leave it alone. Sadly, the warning is too late.

Statistics for This Issue
Men Killed by Jonah - 2
Running Total - 360
Jonah's Injuries - Beat up & tortured
Timeline - This is the ongoing storyline and covers one evening and the next morning.

This was a really great story (the whole arc has been fantastic) and happily we had the full issue with no backup story. This whole idea of Jonah being out of his natural element was delightful and I would like to see the current Jonah Hex book take Hex to Europe or even Russia. Of course, they are going to have a 6 issue arc soon, so that should be great.

Next Issue - Jonah Hex vs Freaking Sharks!!!
Posted by Dwayne "the canoe guy" at 6:30 AM

I love the way that Jonah starts thinking about knife handles as he's wrestling a snow leopard. Guess it wasn't much of a threat.

I don't know if this is a quibble...but wouldn't opium have been perfectly legal at the time?

Hmmm, I'm not sure. Maybe it should have been something really dangerous like Diet Coke & Mentos or Pepsi & Pop Rocks.