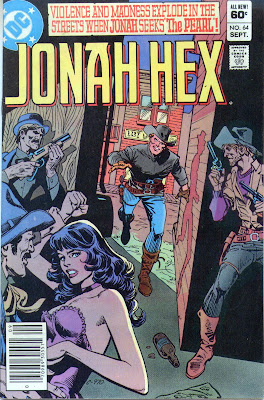 San Francisco, a few days since last issue. Jonah Hex is playing poker in a hotel and is having a run of bad luck. He decides that some night air might clear his head and possibly get his mind off of Mei Ling. Strolling along and turning down a hooker he suddenly hears a scream from an alleyway.

Rushing in he finds a blond woman being accosted. Jonah pulls a gun on the man but two of his friends appear and manage to shoot Jonah in the same leg that the shark gnawed on. Jonah goes down, but kills one of the men in the process. The two remaining men start to take the woman hostage, but then throw her at Jonah so they can get away.

Jonah helps her to her feet and the woman, Sharon Hilliard, starts recounting her story as they leave the alley.

Sharon, daughter of copper tycoon, Maxwell Hilliard, lives on Nob Hill, but a month ago she started seeing Ned Rankin, a young sailor. After several dates that included lip locks and touchy feely games, Ned explains that he is to be wealthy soon. He owns a giant pearl that he has hidden north of town and he is looking for a buyer. Ned explains that the pearl is the size of a hen's egg and then draws a map in the dirt for Sharon. Shortly after that, several men jumped from the shadows and beat Ned to death, Sharon managed to escape only long enough to make it to the alley where Jonah saved her.

Sharon explains that she can't go home because her father kicked her out for dating a sailor. She suggests that she stay with Jonah, but once Jonah learns that she is eighteen, he gets her a motel room next to his.

Later in the night, Jonah hears a muffled scream from Sharon's room and he charges in, killing two masked men in her room. The third is holding Sharon as a shield, but was all know how well that works.

Jonah scouts the nearby alley for any other thugs and then returns to Sharon's room. Sharon wants to reward him, proving that she is not a 'little girl'. 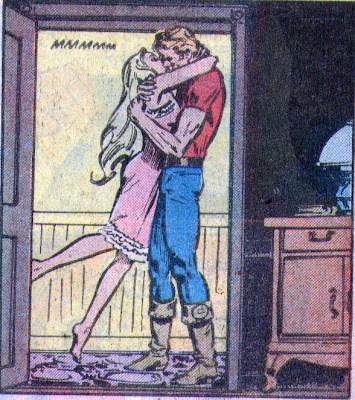 The next morning, Jonah decides that they should try to find the pearl and on his way to the livery, he is approached by Atkins, a man working for Maxwell Hilliard. Atkins says that Hilliard wants to meet Jonah and pulls a pistol to enforce his intentions of taking Jonah is he wants to come or not. Well, this proceeds as to be expected, with Jonah almost breaking Atkins wrist and then Jonah getting clubbed from behind.

Jonah wakes up in the Hilliard mansion, where Maxwell Hilliard explains that Sharon is an unstoppable flirt and that the story Ned told was indeed fake, cooked up by his daughter to convince her father that Ned would be worthy of his daughter. Jonah explains that the masked gunmen trying to kidnap Sharon aren't fake and takes his leave. Hilliard says that Hex is like all the rest of the men around Sharon, only interested in her father's money and a fast roll in the hay.

Back at the hotel, Sharon is waiting for Jonah when she is chloroformed and kidnapped by two masked men. Jonah shows up shortly after, finds the chloroformed rag and noticed heel marks outside the hotel where they drug Sharon away. Jonah steals a horse and rides off, following the wagon tracks that the trail led to. A half hour later, he is outside the Hilliard Copper Smelter #4.

The place is boarded up but Jonah jumps the fence and peeks inside. He sees Sharon on the floor, surrounded by three masked men, demanding the pearl. She says that she has no idea what they are talking about, then one man lowers his mask to reveal himself as Atkins! Just then someone sneaks up behind Jonah and strangles him, rendering him unconscious.

When Jonah comes to, he and Sharon are both tied down to a conveyor belt that leads into the smelting furnace. 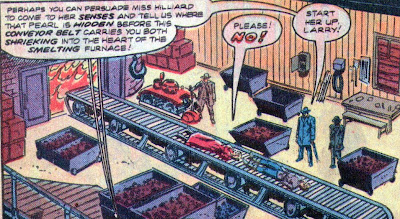 Atkins has taken Jonah's knife & guns and they start the conveyor belt. Atkins states that he and his men will be in the next room, so when Sharon is ready to talk all she has to do is scream and they will stop the belt. Now THAT has to be the dumbest thing I have heard since leaving Pablo to make sure Jonah doesn't escape a death trap! Just stay in the room to be sure they don't try anything tricky! Gah!!!!!

Anyway, Atkins leaves and Jonah tells Sharon to tell them where the pearl is. Sharon them confesses that there is no pearl which makes Jonah so mad he pulls his right arm free of the ropes, grabs a hunk of ore from a bin and throws it at the conveyor lever, turning the belt off!

In the next room, Atkins sees smoke seeping under the door and when they open the door to escape, Jonah comes swinging in on a large hook and boots the ever loving Bejesus outta the men!

He delivers a quick one-two to Atkins and then rides off with Sharon. She asks if he is angry with her for inventing the story and Jonah replies that he's been around for awhile and... 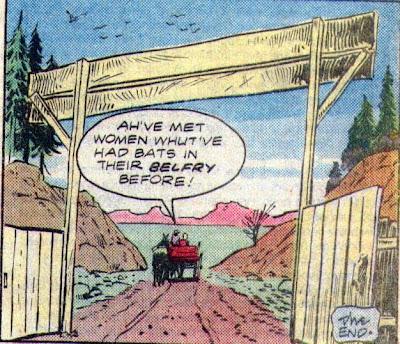 Statistics for this Issue
Men Killed by Jonah - 4
Running Total - 364
Jonah's Injuries - knocked out and strangled
Timeline - Just a few days since Jonah got of the ship from China, so this one is near the end of November 1876.

Except for the rushed ending, this story wasn't too bad. I'm glad to see some continuity from the China arc and Sharon becomes another in the long line of women that have fallen for the scar-faced bounty hunter.

Next Issue: Jonah runs into some old acquaintances from his pre-Civil War days. Needless to say, they aren't happy to see him.
Posted by Dwayne "the canoe guy" at 6:08 AM

So, WHO has gotten laid more: Jonah Hex or Hal Jordan?