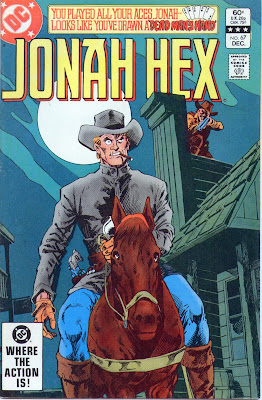 We start the new year with Deadman's Hand, a story where Jonah Hex cuts off the appendage of Boston Brand and then goes and kicks the ass of Rama Kushna just for grins. No, wait, that's wrong.

We start the new year with "Deadman's Hand", the third installment in the Cassie Wainwright saga. The splash page displays a newspaper from Friday, October 5th, stating that Jonah Hex has thwarted the Willow Bend bank robbery. Hmmm, Friday, October 5th. That would be 1872? No, that was a leap year so Oct 5th was on a Saturday. Well, it looks like it would be 1877 or 1866 (nope) or 1883 for this paper to be correct. But we all know this is 1874, right? Riiiiiiight!

Anyways, Said newspaper is being read by one Mr. Croy, a slick gamblin' man who is amazed at the headline, because HE was also involved in the terrible robbery that led to the death of Cassie Wainwright. Needless to say, he gets spooked, thinking that Hex will be on his trail soon. But, he does have time for a game of poker so he can get some traveling money.

During the game, Croy recalls that it has his idea to rob the Fort payroll so his cohorts in crime could pay off their gambling debts to him. During the card game, however, he is caught using a holdout to cheat. The other players start demanding their money and when things get ugly, Croy produces a pistol using another holdout, killing a man. He leaves the saloon, stealing a horse and killing the owner.

A week later and two hundred miles away in Careysburg, New Mexico Jonah rides up to a saloon and finds three smelly cowhands harassing a saloon girl. Jonah walks in and asks the barkeep if the chairs are solid oak. The barkeep affirms that they are and Jonah busts one upside the head of cowpoke #1. Cowpoke #2 gets a beatdown with a chair leg and cowpoke #3 gets thrown into a wonderful upright piano.

The saloon girl, Lisa, tells Jonah that she is fine and would love to have Hex buy her a drink...in another saloon.

Much later that night in Jonah's hotel room, Lisa is admiring Jonah's exploits and saying that if SHE were a man, she would be just like Jonah. She grabs his hat and puts it on, strutting around the room in her undies and then

DIES OF A BULLET RIGHT THROUGH THE HEART!!!!!

Yup, seems the heartless bastard Croy has tracked Jonah down and was across the street in a loft with a rifle. He saw a shadowy figure with a cowboy hat in Jonah's window and let fly with the led.

Back in the room, Jonah grabs his pistols and heads across the street to find absolutely nothing. The next morning, Jonah is seeing to Lisa at the undertaker's when the cowpokes 3 come in, looking for revenge. Jonah calls them scum for killing Lisa and guns down all three confused looking men.

Jonah heads outside and as he is walking down the street, Croy, stationed on a rooftop, shoots Jonah, this time for real. However, it is just a scalp wound and Jonah is taken to the local doctor office where, for 72 hours, he is in a delirium which leads us to..

FLASHBACK!!!!!!!
1859. A corporal comes in to Col. Wainwright's office to announce that the paymaster wagon is overdue. Jonah mounts up with several cavalry with him and heads out looking for wagon. Jonah is able to pick up on the tracks and they find the burnt remains of the wagon as well as...

END OF FLASHBACK!!!
Jonah almost snaps out of it but is still weak.

Down the street, the town crier enters the saloon, announcing that Hex will live. Croy, soaking the locals in poker is stupified, but decides to finish the job later that night.

After dark, he makes his way to the doc's and sneaks in Hex's window. He pulls a knife and stabs the form in the bed, only to find Jonah standing in the shadows. Croy drops the knife and starts fast-talking Hex. Jonah hesitates for a moment and Croy uses the holdout to get a pistol into his hand, but misses his only shot at point-blank range. Jonah returns fire, using two bullets, since lead was cheap back in the day.

Statistics for This Issue
Men Killed By Jonah: 4
Running Total: 374
Jonah's Injuries: Bullet wound to the head.
Timeline: This one covers 10 days in 1874, but the newspaper was from 1877. We won't let a little thing like that bother us, will we? Just remember, 1874, before the wedding to Mei Ling. No mention of her, we are pre-wedding. UPDATE: looks like the newspaper was correct and this was Oct. 1877.

The story itself was pretty good, another small chapter in the Cassie saga. I didn't care for the holdout showing up again, but it had been several years since we last saw one so I guess it is okay to reuse that device. I hated that Lisa bought the farm, getting shot for just wearing Jonah's hat (You listening SallyP & Sea? Don't be playing with men-folk clothes). 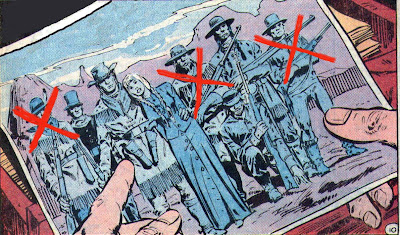 Next Issue: Moose hunting, more tragedy visits the Wainwrights and Jonah becomes a lawman!
Posted by Dwayne "the canoe guy" at 6:00 AM

I wonder if Michael Fleischer had any idea that 25 years after he wrote this book someone would go back and track his made up newspaper date to see what year it was in...and then talk trash about him for not putting the story in the right year.

I'm guessing no, but that's why we love you. Also, remind me to avoid cowboy hats while wearing only my undies. My neighbors are kind of strange so they might be threatened by such a display...

Goodness Gracious! I'd NEVER prance around in front of an open window wearing a man's hat! I'd be too exhausted from wearing a chemise, drawers, corset, corset cover, bustle, and several petticoats...and that's just my underwear!

Sally, I would LOVE for you to draw a comic of a lady from the 1800's getting undressed. It would probably cover more issues than Final Crisis. Come to think of it, that could be the title as well.

Jord, I'm not really pinning the newspaper on Fleisher, it might have been the artist's doing.

And life was even cheaper...

BTW, is Jonah Hex the only comic to use the death cry "Ghaaa"? When we were kids, my Jonah-reading buddy and I would run around playing guns and when one of us got "shot", we'd mimic the "ghaaa" sound. It was a long, held soft "a" on the ghaaa...oh, the things we'll admit...

This issue can't be pre-wedding as you'll see in # 69 which contains the return of Emmylou who was first introduced to Jonah after he was already married to Mei Ling. 69is continued from 68, which is continued from 67. I am currently reading all the Hex books and am enjoying your recaps and the fact I am not the only one with having fun making a timeline. :)

What will we EVER do with you? If you MUST read ahead of the rest of the class, please don't jump up and become the Mayor of Spoilerville.

You're the kinds guy that stands in the theater lobby waiting to see Titanic and says "I can't wait to see the ship sink!"

:) I'm sorry. The ship sank??? It is really just a matter of me doing my timeline and trying to help out. :) It can be a bugger at times that's for sure. Seriously, your recaps and my own reading helps to put things together as I get other "outlooks". My biggest thing now is Jonah's birth "year". All this time we may all be a year late.