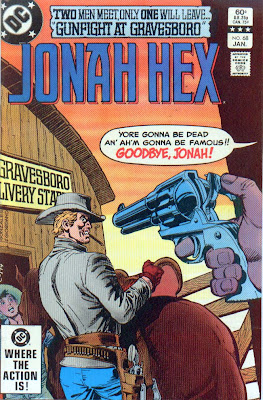 Jonah Hex rides up in front of the Gravesboro Livery when an unknown man calls him out. The man says that he's gonna be world famous for having gunned down Jonah Hex. The only fame he gets is to be number 375 on Jonah's kill list. Yup, Jonah plants one right between the dude's eyes.

Needless to say, but I'll say it anyway, this brings the town sheriff a-running. Jonah recognizes the sheriff as George Rehnquist. George is flabbergasted that it really IS Jonah Hex. He mentions Woodson and doesn't know how Jonah's face got all scarred up so he is obviously an old family friend that hasn't seen Jonah since 1866.

Jonah asks George if he wants to know why the dead body in the middle of the street came to be there. George looks down and says "Barney Gossett?..If'n any man ever needed killin' it wuz thet cold-eyed bully" and then he takes Jonah over to a saloon for a drink.

Later, in the General Store, several of the town leaders have gathered together to hatch a plan. They are wanting to offer Jonah the job of sheriff. Seems George is getting on in years and every crook in the area knows that George can't stand up to them. They decide that they could hire Hex temporarily, just until the town gets a reputation for not being a pushover. Their plan runs into a snag.

Later that night, in Jonah's hotel room, Hex refuses the job. He won't put his friend George out of a job. The fast-thinking town leaders offer the job of deputy to Jonah, mostly in order to keep George from being killed by all the rabble that has infested the town. Jonah decides to accept that offer.

Next morning, several hundred miles away, two men are sneaking up on a barn. They ask a young boy if he has seen a man dressed all in black. The boy says that the man is hiding in the barn. The two men rush into the barn, only to have the doors slammed behind them and barred shut. Outside, the man in black, Kincaid, pays the young boy 15 cents for lying to the two men and then he launches a lit lantern into the barn.

With the barn now ablaze, the two men inside continue to batter the barn doors until they finally break out, only to be cut down by a hail of Kincaid's bullets. Shortly thereafter, Kincaid is at a large ranch collecting his money for killing the two men (who were hired to settle an argument over water rights). Kincaid thanks his employer and states that he now has to settle an old score with Jonah Hex.

Back in Gravesboro, Jonah & George are walking down the street when Arbie, the saloon owner comes flying through his own front glass window. Arbie says that the Ransom boys are tearing up his place. George heads in to calm things down but ends up getting his gun taken away, beer poured on his head and knocked out with a chair. Just as the leader of the Ransoms is getting ready to beat George with a whip, a bullet cuts the whip clean in half.

The leader turns to find Jonah standing in the doorway. The man pulls a gun and.. Well, how can one easily explain what happens next? It's so much better to just show you. 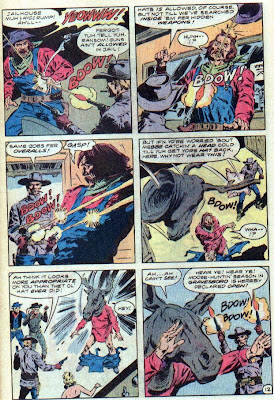 Jonah gets the rest of the gang off to jail and helps George get his bearings.

Three days later and twenty miles away in Nugget Gulch, the entire town (including Michael Fleisher himself!) 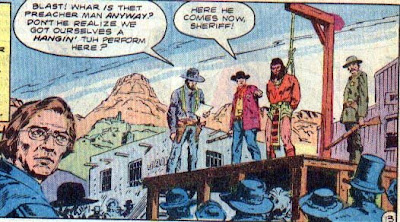 is out to witness the hanging of a murdering Indian. The Reverend finally shows up to say a prayer over the condemned but just as the door is almost opened, the reverend produces a pistol from his Bible and shoots everyone on the platform. Holy Crap, the reverend is Kincaid!!!

Kincaid cuts the noose and bonds holding the Indian, White Claw, and they start running through the streets to a pair of horses that Kincaid has stashed. As they are riding out of town, White Claw tells Kincaid that he knows why Kincaid is there, to recruit White Claw in his attempt to kill Jonah Hex. As a note of emphasis, White Claw decides to bury the hatchet, literally, in the forehead of a man trying to shoot them from a second story window.

Later that night, back in Gravesboro, in the local whorehouse, a huge man is shooting up the place and in general busting up everything he sees. George shows up and tells the ruffian to hand over his pistol. The man starts to threaten George and suddenly changes his mind and asks to be handcuffed, he will go quietly. George says that he's glad that he is finally getting respect in the town and the man states that it was only because Jonah was standing behind George that he complied at all.

George tells Jonah that he should be out patrolling and the crook busts up laughing when he realizes that George thought he carried any weight in that town. Jonah heads back to the hotel to grab a couple hours of shuteye so he can relieve George for the late shift.

Meanwhile, George has gotten back to the jail when a man comes running in saying that Farrell Kincaid is in town and will start killing folks unless Jonah Hex shows up. George grabs his shotgun and heads for the saloon. The man asks if he should get Hex and George says that he can handle this himself.

Meanwhile, Jonah is dreaming and we have...

Jonah and the Army men with him return to the fort, the body of Cassie in the wagon behind them. At the fort, Jonah reports to Col. Wainwright about the robbery and the murder of Cassie. The Col. excuses Jonah and locks the door behind him and then... 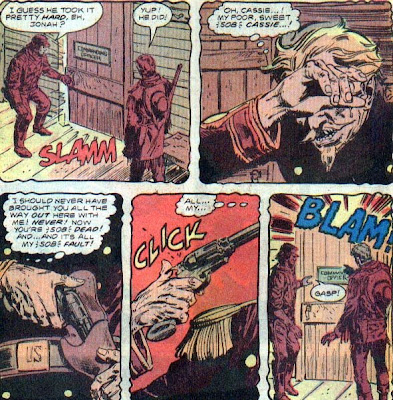 Jonah is awakened to a pounding on his hotel room door. The same man that notified the sheriff of Kincaid being in town tells Jonah that Kincaid has just killed the sheriff.

At the saloon, Kincaid pours himself a drink and then pours one for the dead Sheriff George, who is propped up in a chair, his mouth hanging open. Just then the saloon doors swing open and Jonah walks in, not knowing that White Claw is up on the balcony, ready to ambush him! 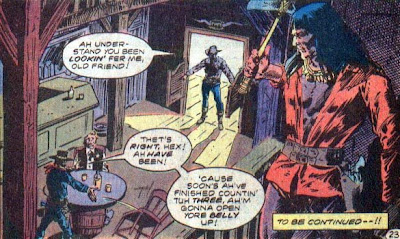 Statistics for this Issue
Men Killed by Hex - one
Running Total - 375
Jonah's Injuries - None
Timeline - This one covers about a week, sometime after mid October in 1874, because that is 15 years after 1859, remember? I don't care what some commentators have said, it is 1874. UPDATE: Oct. 1877

The comic elements in this one reminded me of North to Alaska or McClintok! But the best part ended up being the gruesome corpse of George sitting in the saloon. Eeeeeewwwwww, eyes rolled back up in his head, mouth open. It was great. Another good installment in the Cassie Wainwright Saga 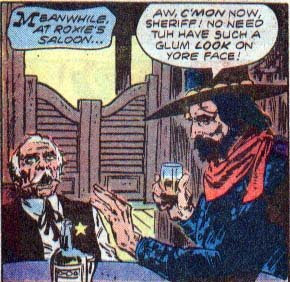 Next Issue: Jonah ends up in a Clint Eastwood movie!!!! For reals!!

The saloon sequence was ideed a hoot. I thought that the pants-dropping was a nice touch. But then I would.

Funny -- I thought of McClintok!, too! Gotta love Western humor. ;-)