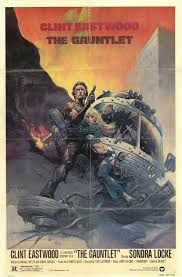 Ya see, Jonah has to escort this witness back for trial and ends up armoring an entire bus because the police have been told they need to kill him, so Jonah drives the bus slowly through town, getting terribly shot up but he makes it in the end. 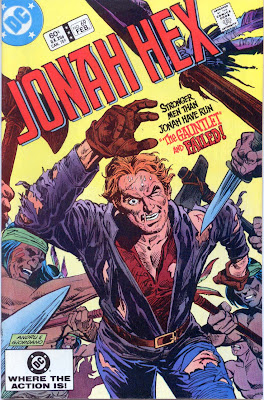 Jonah has just walked into the bar where George is dead, having a drink with Kincaid. Kincaid starts yammering about how he is gonna kill Hex, but this gives Jonah just enough time to notice that White Claw is on a balcony, about to kill Hex with a tomahawk. Jonah dives for the floor, pumps two shots into White Claw, rolls across the floor avoiding Kincaid's bullets, and pushes two lead pills into Kincaid, to which Kincaid replies "GHAAA!" and dies.

White Claw, however isn't dead. He leaps from the balcony, swings on a light fixture and jumps out the window. Jonah chases after him but runs into a man carrying several boxes. This widens White Claw's lead, but the chase is on.

It is a race that White Claw is winning, keeping Jonah guessing on the trail until Jonah is on a cliff overlooking a small farm. On the farm, Claw walks into the barn and tells the farmer he needs a fresh horse. The farmer says that he can't sell what he has, he needs them both. Claw decides to bury the hatchet..... 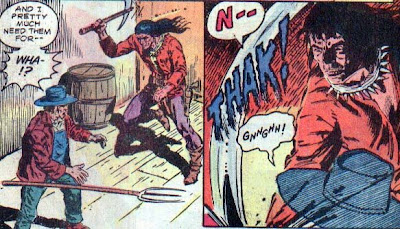 Jonah rides down to the farm and finds the dying farmer. The farmer expires and Jonah continues the chase.

Night falls and Jonah follows the trail to the base of a cliff covered in caves. Jonah finds a wagon with a family settling down for the night. He stops, asking if they have seen an Indian around. The family, husband, wife, & little girl, are heading for Canada to start a hog farm (Canadian Bacon?!?!?) but they haven't seen anything. Jonah warns them White Claw is very dangerous and they should be careful.

Of course, the little girl, bored with all this talk of danger, wanders off into the high grass by herself in the dark. Jonah rides off and shortly thereafter the little girl finds White Claw.

Jonah is getting ready to start searching the caves when he hears rifle shots and makes a beeline back to the wagon. The little girl is safe but White Claw is on the run. The proud member of the FBGC (Future Bacon Growers of Canada) tells Jonah which way the Indian headed and Jonah realizes that White Claw is making for a nearby Shoshone village.

Sadly, Jonah is suddenly ambushed by several Shoshone and knocked out.

Several hours later, at dawn, Jonah Hex is tied to a stake in front of the Shoshone chief who has just heard White Claw's testimony that Jonah has tried to kill Claw for no reason. Jonah tells his side of the story, but since white men can only lie, the chief cannot allow White Claw to be taken to the white men's courts.

White Claw wants to kill Hex, but the chief is aware of Jonah's rep in the hood and thinks Hex deserves a fighting chance. Jonah Hex will have once chance to save his own life by running....

The horror of the gauntlet cannot be described, it can only be witnessed... 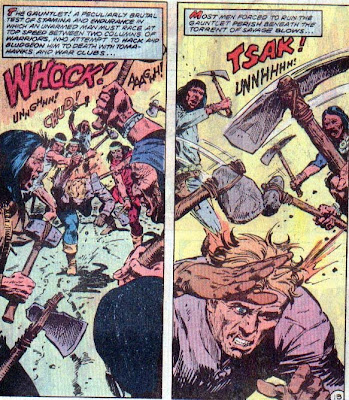 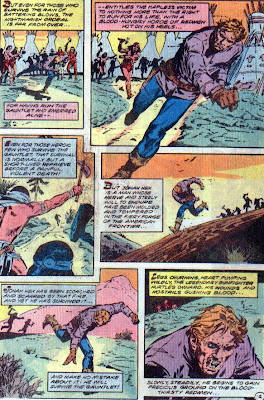 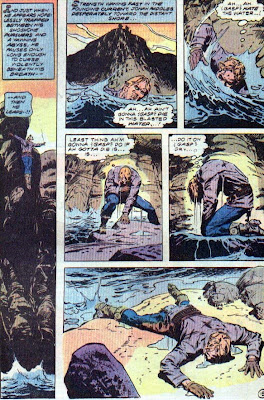 So Jonah lies there, passed out on the beach, unaware that a horse and rider has arrived and is standing over him.

Time passes and even though Jonah awakens from his personal darkness, he is still shrouded in blackness. He wonders where he is. He sees a shadowy form in front of him and he calls out..

Anyway, the shadowy form lights a lamp and is revealed to be... Emmylou Hartley!!!!! WOW!

It appears that she has been following Jonah for months (did she go to China as well?). She tells Jonah that she is in love with him and has been ever since he kissed her in that mountain cave. She had tried to forget about Jonah, since he was married, but she couldn't and when she heard that Mei Ling had left and Jonah rode off as well, Emmylou followed after Jonah.

Three days ago she found him on the bank of the river and brought him to this abandoned trapper's shack. As she moves closer to Jonah, he warns her to be careful, it feels like several of his ribs are broken. Emmylou promises to not go near his ribs.

For three weeks, Jonah recovers in the cabin with Emmylou by his side. One afternoon, Jonah is bringing in some firewood and the heavy winter storm is raging outside like the devil's own frozen fury (I made that up. See what I did there? Writing!!!!) As Emmylou is closing the door behind Jonah, White Claw shoves the door open and pushes Emmylou aside!

White Claw screams that the others in his tribe thought Jonah dead from the river, but he knew better. Now Jonah's scalp will hang on the halter of Claw's pony. Claw throws a tomahawk at Jonah who quickly blocks it with a chair. Claw charges Jonah, knocking them both into the pot-bellied stove, upsetting the whole shooting match.

Claw holds Hex down, ready to cleave his head in two, but Jonah manages to grab a skillet and wrap it around Claw's head. Jonah pummels Claw a few times and then, his own coat ablaze, knocks Claw outside. Claw pulls a knife and Jonah grabs the only thing he can find, a large stick, and decides to make a fight of it.

Sadly, the fates have deemed otherwise, as Jonah slips and falls on a patch of ice. Claw advances for the kill when suddenly Emmylou bursts forth from the cabin to stop Claw. White Claw turns and buries his knife right into the beautiful chest of Emmylou Hartley. 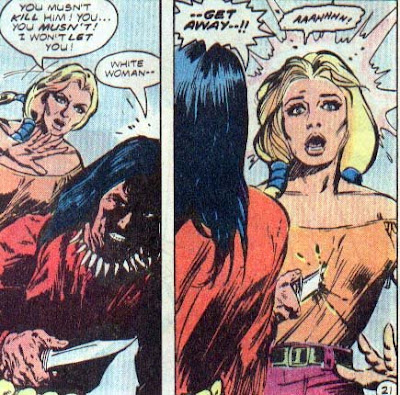 It goes without saying that Jonah goes absolutely apeshit at this point! Grabbing an axe... 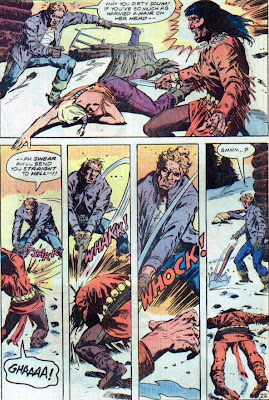 Jonah finishes the job he started so long ago. Jonah runs to Emmylou and.... 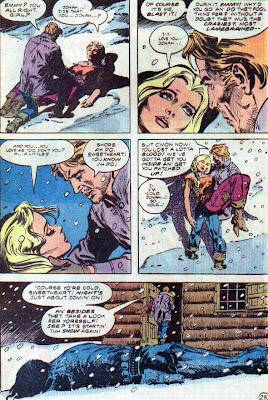 Statistics for this Issue
Men killed by Jonah - 2
Running Total - 377
Jonah's Injuries - Knocked out, beat almost to death, several broken ribs
Timeline - .............Thud!.....Thud!......Thud!... There. I feel better. My head hurts and my keyboard is dented, but I feel much better. Taking into account the passage of time, and the several clues sprinkled throughout this and previous arcs, this story is placed squarely in 18xx. (and I'm not so sure about that). UPDATE: This one ends in Nov 1877

Anyway, the timeline set aside for a moment (this book covers about 4 weeks, just for the note takers out there), there was one helluva lot going on in this book. Rather than the normal done-in-one, or the ending with a cliffhanger, this story almost seemed like three stories put together. We had the exciting climax with the death of Kincaid, then there was the chase after White Claw, and finally the reveal of Emmylou Hartley. The ending wasn't a cliff-hanger, but we know that this will be continued, so it's like the beginning of a whole other story. I really liked this format, it was certainly different for a western, it was different than what Fleisher had done up until now, and it was definitely different from what DC was doing elsewhere.

Several folks, myself included, have cited the Last Bounty Hunter as the best Hex story, but I have to place this one right up there, mainly for the unusual pacing of the entire book. I also add points for the great cover with the tilted perspective (including the title of the book)

Jonah marks two more off his list of Cassie's killers. 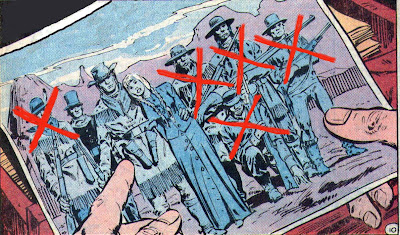 Next Issue: Jonah goes back to the Shoshone village to set things right, and Jonah encounters the horrible truth about...The Swastika!!!!!
Posted by Dwayne "the canoe guy" at 5:25 PM

Whoa! That's a great story. White Claw seems to have an inexhaustable supply of tomahawks, he's as bad as Batman with his batarangs!

Too bad about Emmylou though.