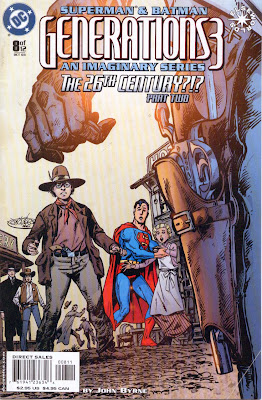 How's THAT for the most unwieldy book title evar?!?!?

Okay, I have to admit, I have absolutely no idea what is going on here, but it's Elseworlds, so it doesn't really matter now, does it? I can say that Batman & Superman are involved and I think it's Superman's daughter and Darkseid is there as well as Metron on Scott Free. So hang on, we're in for a bumpy ride.

Batman and Lara tear open an old coffin and find Superman alive!!! Superman relates some of the back story and how he ends up time-traveling and landing in Smallville, Kansas, 50 years before he landed there as a child. If we're talking about the 1938 landing, it would place him in 1888.

Anyway, Superman changes into his Clark Kent duds and walks into town and learns that Scott Free is the town sheriff. He also learns that Metron is helping out around town. Anyway, they talk some about time travel and then they decide to let their one prisoner free. The prisoner promises to be good and then walks across the street to talk to a woman.

The man, Jonny, is talking about getting revenge for what happened back in the Civil War but the woman, Em, doesn't want him to go through with it. The object of the revenge? Well, he's sitting across the street in a saloon, enjoying lunch... 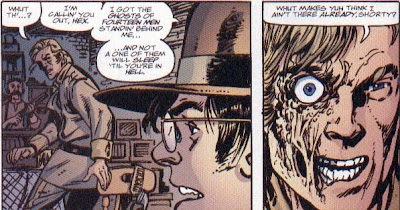 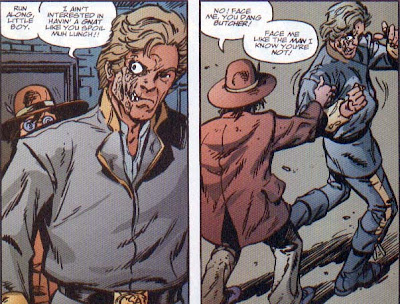 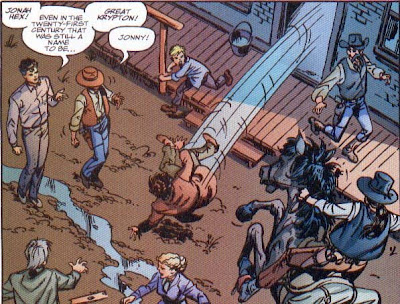 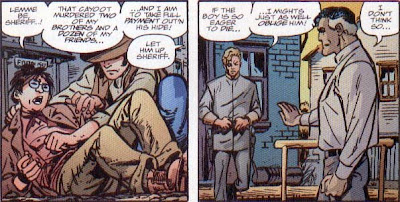 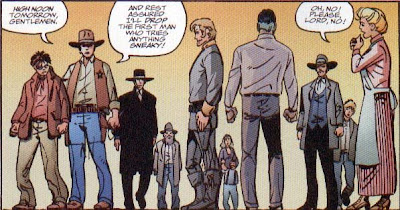 Anyway, Em talks to Superman, asking if he can talk sense into Jonny. And she asks his name. Superman replies that his name is Clark Kent. Em is aghast. She says that Jonny's last name is Kent and her name is Martha Clark!!

Now Superman is in a quandry. There is no record of his dad fighting Jonah Hex, but he can't let theh man be gunned down, but he can't interfere in history!! Seems that Jonah Hex is hunting a killer named Caleb Lamb. Anyway, tomorrow comes and with it, high noon.... 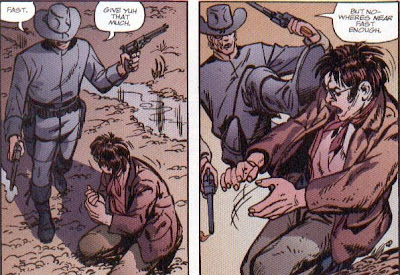 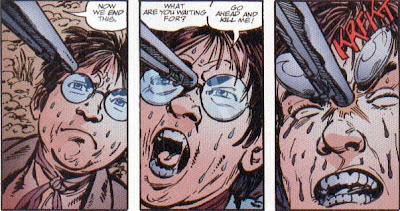 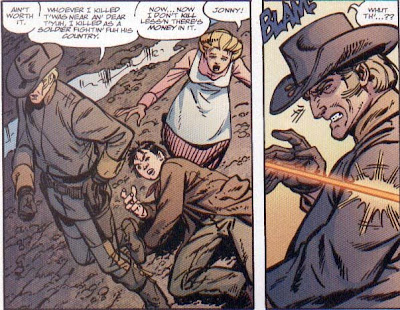 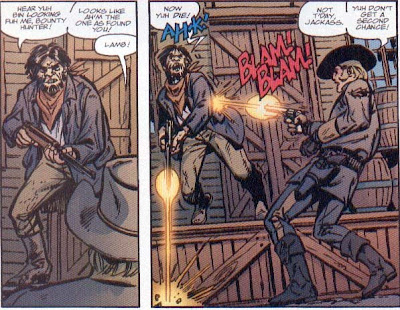 Jonah doesn't get any farther in his sentence before Jonny interrupts him. The shot that just nicked Hex went across the street and struck down Martha Kent. They take Martha to the only doc in town but ha can't do a thing.

Metron jumps on his chair and flies to Metropolis and gets a doctor (blindfolding him for the trip back). The doc is able to get the bullet, but he says that Martha will never have children. After that, Jonny proposes to her and Metron solves the problem of getting Superman back to his own time.

Yup, it's the huge coffin thing at the start of the story. It was actually a suspended animation chamber. The last two pages have Darkseid gloating as only he can, but I haven't read the seven previous issues and I couldn't care less.

They don't really count, since this is Elseworlds, but Jonah guns down Caleb Lamb.

It was nice to see a Byrne Hex. Pretty ugly and fairly true to form. Since it is a Superman/Batman book, Jonah does shoot a gun out of Jonathon's hand.

Next week: we head back into our regular Jonah Hex continuity.
Posted by Dwayne "the canoe guy" at 6:00 AM

Well...that was different! Byrne did draw Jonah with nice hair, though.