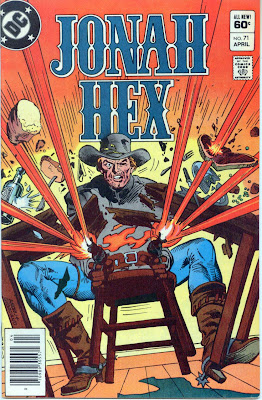 There's Jason standing high atop the boulder, he and his three thugs having gotten the drop on Jonah, Emmy, Tim and Daniels. Jason is sick and tired of his old man giving all of the inheritance away on silly charities. Jonah speaks up and says that he hates to break up the family reunion but he has to get going and that Jason should step aside or...

Jason, stupidly replies "Or what?"

Jason dives behind a rock and opens fire, clipping his dad in the head. Daniels is down (but not dead) and Jonah and Emmy are pinned behind a rock. Jonah gets a bright idea and.. well, I"ll just show ya. 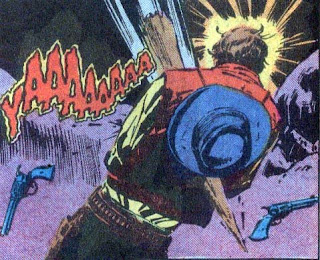 After that, Jonah saddles up to go stop the Manitou. Shortly he spots the Manitou and his Mani-thugs on the cliff planting the dynamite. Jonah dismounts and then catches a slug on the right thigh, cleverly placed there by a Mani-lookout. Jonah, being one to never receive a gift without returning the favor, sends two bullets into the Mani-lookout, causing him to double over (thus creating a Mani-fold) and fall out of his Mani-lookout tree.

Manitou hears the gunfire but continues his rant about leading the Indians against the white man and also continues planting the dynamite.

Jonah is trying to figure out how he's gonna sneak up on the crazy Indians with a bum leg but just then Daniels rides up. Yup, Daniels, his head professionally bandaged by Emmy, has grabbed a horse and found Hex. He tells Hex that he hasn't had any peace since the death of Cassie Wainwright and this is his one chance to atone for his sins. Daniels jumps up and runs off to remove the dynamite.

Meanwhile, Manitou and two of his Mani-thugs are heading for the detonator. They turn and see Daniels running for the dynamite and the thugs head back to stop him. During the fight Daniels is kicked in the head and then double-fist clubbed in the noggin. The Manitou panics and realizes that he has to detonate the charge now. He lunges for the plunger but Daniels is able to get himself, the dynamite and the two thugs over the edge of the cliff before it explodes, thus ruining the Manitous's mani-plans. 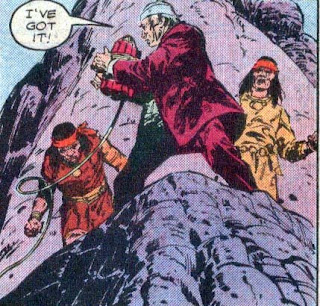 Meanwhile, Jonah has worked his way up the cliff and gets the drop on the crazed Indian would-be leader. Jonah and Emmy wave goodbye to Tim Daniels and take the saboteurs into town. The end.

The next morning, in town, Jonah is heading to see the doc while Emmy gets them a room at the hotel. Walking through town, Jonah thinks he sees Mei Ling and runs over to her, only to realize his mistake. He gets to thinking that he isn't really over Mei Ling and that he is leaning on Emmy for emotional support. Something that he has to stop doing.

After seeing the doc, Jonah heads back to the hotel to find their room empty. Jonah inquires at the front desk and learns that Emmy left with 'two Mexican gentlemen' and they left a note. In the note?

Now Jonah is heading to Mexico to find El Papgayo, last seen way back when Jonah was fighting off the Fort Charlotte Brigade. Jonah rides into town and contemplates on the telegram that he sent Col Sanchez, hoping he gets it in time. Jonah takes a seat in the Punta Del Rojo Cantina (I thought it was the PUTA Del Rojo which means Red Whore. My bad). He waits about an hour until three men approach him and threaten to kill him. Stupidly they didn't realize you don't threaten to kill Jonah Hex, you just kill him. But....

Just the El Papgayo walks in and tells Jonah that he tried to stop these men, but kids are so stupid these days. Down to business, Papgayo explains that in order to get Emmy back, Jonah will have to do a favor for Papgayo.

On the ride back to El Papgayo's lair, Papgayo explains that the Mexican government has started cracking down on renegade bandits. However, in one week, President Diaz is having a huge party in the palace in Mexico City and the Spanish Ambassador is bringing a necklace worn by Queen Isabella herself. Papgayo intends on stealing it but knows that the palace would be heavily guarded. He plans on having Hex steal the necklace BUT so that everyone won't think that Papgayo is a coward, Hex will be disguised as El Papgayo when he commits the crime.

A week later, Jonah is in Mexico City, outside the palace. He works his way over the wall and knocks out two guards. Then he slides down a rope off the roof of the palace, right into the party. He grabs the necklace from the neck of the President's wife and heads out the front door. Just as he is about to mount up and ride off.....

Statistics for this Issue
Men Killed by Jonah - 7
Running Total - 385
Jonah's Injuries - Shot in right thigh
Timeline - This one covers about 8 days. The pacing is weird with one arc ending in the middle of the book and another starting right there. Fleisher did this for several issues, I think to boost readership or at least loyalty. Nov of 1877

That's one heck of a good disguise on Jonah.