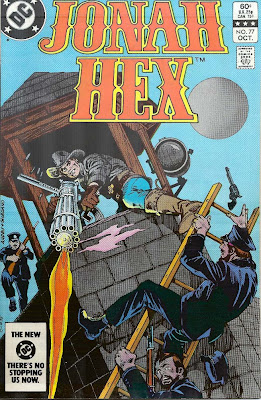 Jonah Hex lies in solitary, beaten, scarred, surrounded by rats. The vermin fight him for food and at times even gnaw on his toes. Lying still, Jonah waits and waits and waits until he can finally grab one of the rats and slam it against the wall in a moment of triumph (and I suppose, added sustenance).

Six weeks earlier, (by the recap) Jonah started his trek to this place and now, several weeks later, the viewport on his cell door slides open. The door slowly creaks on its hinges and in steps Quentin Turnbull!

Turnbull, in his never ending quest to gloat 'oer his foes, outlines his whole plan to Jonah. He tells how it was he who devised the chain of events that will keep Hex chained for 25 years and he even states that once Jonah Hex is dead, they will continue to keep his bones in this very cell. At that point, Jonah springs towards Turnbull, grabbing him around the throat. 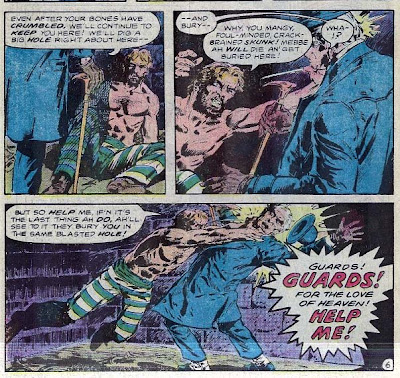 Turnbull shouts for help and Kozrak and another guard come to his aid. They beat the broken Hex back into submission and Turnbull leaves the cell, letting Jonah nurse his wounds and contemplate his fate.

Meanwhile, at that very moment, Emmy Lou Hartley is in the warden's office demanding to see Jonah Hex. Warden Davies states that Hex is in solitary for sixty days and can have no visitors. Emmy says that she will be back when the sixty days are up and that she WILL see Jonah.

The next day Davies and Kozrak visit Hex in his cell. Jonah is on the floor, not moving. Kozrak thinks that he might have ruptured something during the last beating and asks if he should get the prison doctor. Davies nixes that idea seeing that Jonah was never supposed to be leaving that prison anyway. 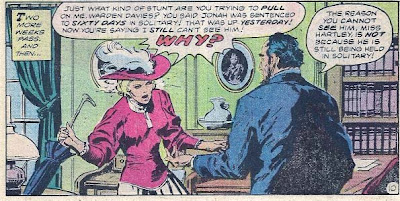 Davies once again denies Emmy access to see Jonah because Jonah Hex is DEAD!!!! Hex contracted a sudden fever and dies two days ago. Davies is even so nice as to allow Emmy to view the grave but she is unable to relocate the corpse due to the quarantine imposed on Jonah's body. The fever was of unknown origin, so the doctor issued a general quarantine.

The news of Hex's death hits the papers and eventually Mei Ling learns of his death. Sadly for Mei Ling, even though she no longer is with Jonah Hex, the town busybodies still impose their bigoted views upon her and Jason.

Back at the prison, Kozrak is holding a newspaper in front of Jonah's face (see, he ain't dead kids. It was just a literary device!),gloating that since Hex is 'dead', the prison can do whatever it wants to Hex. With everything left in him, Jonah lashes out at Kozrak,punching him in the face, kneeing him in the jaw and finally slamming his head into the stone wall. 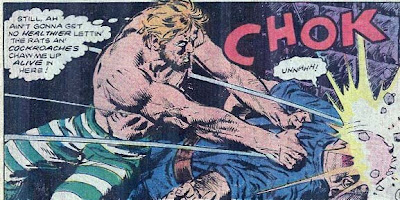 Grabbing Kozrak's whip, Jonah staggers out of the cell to the storeroom, where he finds his belongings.

Refitting himself with his clothes and weapons, Jonah starts to make his escape. He knocks out a guard and then heads for the wall. Using the whip, he manages to climb the wall and knock out the guards manning the Gatling gun in the guard tower. He opens fire on several guards and then jumps over the wall to his freedom.

Several days later at the house of Gov. Phelps, Quentin Turnbull is having an absolute fit. Phelps tells Turnbull that not only has Jonah Hex escaped prison but that he has access to a letter that Phelps wrote certifying Jonah's innocence. Turnbull shouts at Phelps regarding the letter, threatening Phelps with his cane. Phelps steps back in self-defense, stumbles on the rug and pitches over into the marble mantle, cracking his skull open like a ripe watermelon!

Phelps lies dead at Turnbull's feet and Turnbull, coldhearted bastard that he is, turns and leaves the mansion, never bothering to notify anyone of the Governor's death. Turnbull is lost in thought on how to locate that letter, he gets into his buggy and drives off.

Meanwhile, Jonah Hex is on the roof, watching Turnbull drive away. Hex's plan is to confront the Gov. and... suddenly there is shouting from inside the mansion as Phelp's body is discovered. People rush out of the mansion and see Jonah on the roof. They assume that Hex has killed the Gov and Jonah has to fight his way through them to make his escape.

Later that night, Emmy Lou is getting undressed, knowing deep inside that Jonah Hex is alive. There is a knock on the door. It's the hotel manager with a message. When Emmy opens the door she is confronted by two goons and Quentin Turnbull (okay, make that three goons, or two goons and a heartless bastard) who is demanding the letter (of which Emmy knows nothing of) that Jonah had entrusted to her! 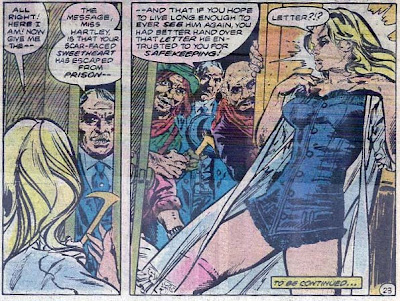 Statistics for this Issue
Men killed by Jonah - I will have to go with one. While Jonah is shooting the prison guards, one of them gives forth the dying "Koff Koff"
Running Total - 398
Jonah's Injuries - Jonah gets the crap beaten out of him once again by Kozrak
Timeline - Let's see, Jonah started this adventure 6 weeks ago and then 2 weeks passed before he was declared dead, then add in a "and soon" and a "several days later". Let's say the "and soon" equals three days (news traveled slower in those days) and "several days later" will be five days.

I have revisited the Cassie/Wedding/Emmy Lou issues and decided that the Cassie storyline CAN fit into the post marriage timeline. There were a few times during the Cassie saga that the phrase "15 years" also had the words "almost" 7 "about" tacked on, thus making it approximately 15 years after 1859, so placing it into 1877 can actually work (close your eyes and work with me here). Anyway, one thing follows another and since I placed last issue at Feb 1878, this one (68 days later will take place in April 1878.

I liked this issue even though there were some common sense problems. Turnbull had some of the best characterization here that I have ever seen. He's cold, cruel, spineless, evil, and very very easily despised. the common sense problems I had were Jonah being near death and still being able to climb the whip and jump over the wall (unless he was playing possum), and I can't figure out why Jonah even needed to visit the Gov other than to be accused of his murder.

But still, this issue is nothing but non-stop action and it gets even more crazy as we go along.

I also enjoyed the forced perspective on the title and the entire angle of the cover. It just screams ROSS ANDRU!!! and I love it! (I like the ziptone moon as well.)

Next Issue: The lover's reunite, an Indian massacre, Wilbur & Homer are introduced, and the unexpected return of a law-man.
Posted by Dwayne "the canoe guy" at 6:00 AM

Goodness! How will Jonah get out of this one?