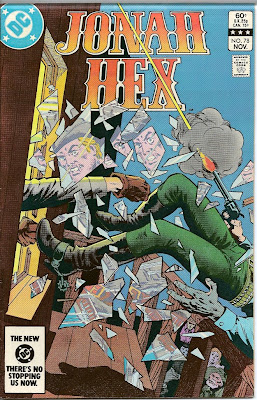 Jonah Hex is crouching on the roof of a hotel and inside, Head Rat Bastard Quentin Turnbull is having his thugs slap around Emmy Lou, trying to get a letter from her. Finally things escalate to the point where the thugs pull a knife and Turnbull starts to leave the room because violence makes him queasy.

Just then Jonah Hex comes crashing through the window and launches like a savage into the two thugs. While Jonah is dishing up the Whoop-Ass parfaits, Turnbull heads out the door and escapes. 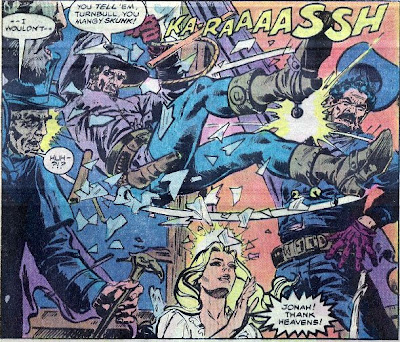 Suddenly a thug with a knife charges Jonah and ends up getting himself thrown out the window into the street. Rather than chase after Turnbull, Jonah turns his attention to Emmy. 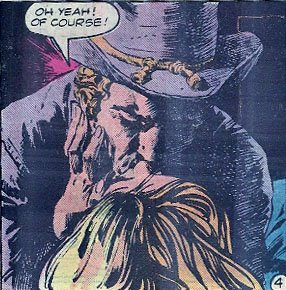 Jonah tells Emmy that he has to retrieve the Governor's letter and that she is to go to the next town to the south and wait for him. Emmy agrees to follow his orders.

The next morning, Warden Davies is having a tough time explaining to reporters how a dead Jonah Hex can be responsible for the murder of the Governor.

Meanwhile, fifty miles away, three men hold up a bank, murdering several folks along the way, and then ride off. After a short time they come to a place in the road where a huge herd of goats are blocking the road. They shout at the skew-eyed hayseed herding the goats but he is hard of hearing and can't understand what they want. As the thieves come closer the hayseed quickly draws a pistol from his hat and shoots the ringleader. Suddenly gunfire erupts from a nearby haystack, killing the other two bandits.

With a hearty hyuk hyuk hyuk, Wilbur climbs from the haystack and congratulates his brother Homer on how smart they were to wait on the only road coming from Carterville in order to collect the bounty on these bandits.

Meanwhile, Jonah is on his way to retrieve the Gov Phelps letter but he suddenly comes upon over a dozen Indian women & children massacred in a river. On the riverbank he finds a young Indian boy, barely surviving his wounds. Jonah gives the boy some water and the boy says "white....men..." before passing out.

Several hours later, Wilbur & Homer are collecting the bounty for the bank robbers in the local sheriff's office. They spy the wanted poster for Jonah Hex and decide to earn a quick 10 grand. 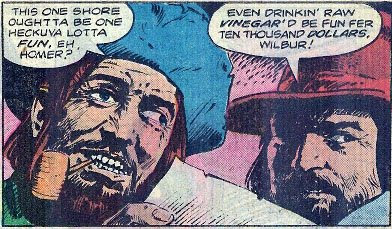 The local deputy confides in the sheriff that he can't see how these two homely hayseeds can shoot anyone properly, but the sheriff explains that they are probably the most deadly bushwhackers in the entire west.

Several hundred miles away, Mei Ling is working in the garden with Jason by her side. Just then J.D. Hart rides up. Hart visits with Mei Ling and comments on how Jason is. Mei Ling comments that Jason is nearly two now (with the Hex wedding being in 1875 that would place this in 1878, which lines up with my calculations for last issue). Hart mentions that Jonah is in a lot of trouble and he is going to try to help Jonah get this mess cleared up. 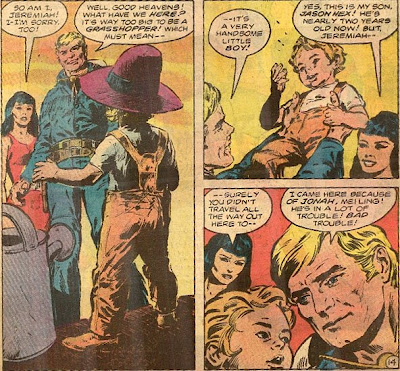 Several nights later we find Jonah sitting near a campfire with the young Indian boy. The boy, Little Raven, is the son of the chief, and has the manners of a brat. He gobbles down all the food and leaves none for Jonah. He states that he is 12 and that he plans on avenging his tribes death and that Jonah will help him.

The next morning has Homer & Wilbur coming across the massacre site as well. They notice that one of the horse prints has a shaky left shoe, just like that describes by a rancher that claimed to have had his horse stolen by Hex. The brothers are now on Hex's trail.

Several hours later, Jonah and Little Raven are on a hill overlooking a camp of buffalo hunters. The hunters are poaching buffalo on Ojibwa (Chippewa) land. That is probably the reason for the massacre, the Indians stumbled onto the poaching activities. Anyway, there are 9 hunters and before Jonah can concoct a plan, Little Raven runs down the hill and sneaks up to the buffalo hunters wagon. He reaches in and grabs a barrel of gunpowder and starts leaving a trail of gunpowder along the ground.

The hunters see him and Jonah has to provide cover fire for Little Raven. The Indian finally tosses the barrel aside and heads for the hills, allowing Jonah to make the shot of the century, hitting the metal rim on the barrel, sparking the gunpowder and igniting the trail until it heads back to the wagon and explodes all the dynamite contained therein (because all buffalo hunters carry dynamite.)

Eventually, Jonah gets Little Raven back to his tribe and late that night, the chief performs a sacred ceremony making Jonah & Little Raven blood brothers. The chief bestows a new name on Little Raven. He is now Man of Two Bloods.

The next morning, Jonah continues on his way to get the letter when he comes across Homer standing in the road. Homer says that his canteen sprung a leak and asks for a drink from Jonah's. Jonah starts to oblige and we see the barrel of a rifle slide out from behind a rock and hear the thought balloon of hyuk hyuk hyuk.

Statistics for this Issue:
Men Killed by Jonah: 1 buffalo hunter shot & 8 blown to hell.
Running Total: 407
Jonah's Injuries: none this issue
Timeline: In keeping with last issue, this one happens in April of 1878. This is also supported by Mei Ling's statement of Jason being nearly two. This issue covers about a week.

The action just keeps coming from here on out. In this issue we have:
There was no real climax to this issue, just ongoing action and more plot developments.

Wilbur & Homer are two poor characters, what with the hyuk hyuk and the wandering eye (a la Jack Elam). J.D. Hart has changed from wearing tan buckskins and having dark hair to being blond and wearing blue buckskins. The plot with Little Raven is fairly close to the storyline with Little Fawn way back in WWT #12.

Can't give this issue a big thumbs up, but it sure had a lot packed into it.

Next Issue: Everybody gets what they deserve. (It's about time!)
Posted by Dwayne "the canoe guy" at 6:00 AM

Love this cover too.

Yeah, the covers during the last years could be pretty inventive. This cover is great in that you don't see anyone's face except in a reflection. Ross Andru always produced great covers.

I'm glad I'm not the only one to notice that Hart suddenly had blond hair. I thought I was losing it.

I thought it was funny that Turnbull can watch a man accidentally smash his own head open like a ripe melon, but gets queasy when someone slaps around a blonde.