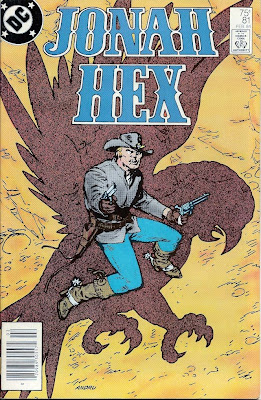 The sad thing about this issue is that the first four pages are a recap of the last two pages from the prior issue. Turnbull has just been bitten by a rattlesnake (the snake survived the bite) and Jonah is going to leave Turnbull to succumb to the poison.

Then, suddenly for no reason at all, Jonah changes his mind and does his best to suck the poison from Turnbull's hand. It would have been better if he had done it for Jeb's memory, or maybe realizing that he needed Turnbull to clear him of the Governor's murder, but none of that is stated.

Meanwhile, J.D.Hart is turning in the thugs that he captured last issue. Hart learns about Jonah Hex's escape from jail and then heads for the hotel to get some grub.

Much later, Jonah & Turnbull are heading back to town in Turnbull's buggy when there is a sudden avalanche in front of them. Jonah is able to get the horses stopped and then there is another avalanche behind them. They find themselves boxed in the narrow canyon and that is when the gunfire starts. Turnbull has recovered enough from the venom to beat a hasty retreat to a nearby cave with Jonah close behind him.

Once in the cave, they hear shouting from above them and it turns out it is none other than El Papagayo, seeking revenge. Things aren't looking good at all.

Elsewhere, Emmy Lou Hartley has packed up and decided to leave town to try to get Jonah Hex out of her mind and her heart. 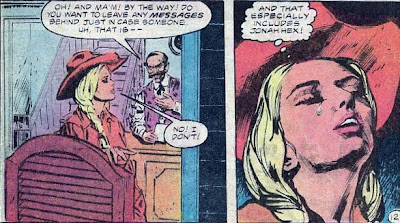 On the way to the stage depot she shoved an ignorant goon into a horse trough.

Darkness is now falling on the canyon where Jonah & Turnbull are trapped. Turnbull reasons that Papagayo has nothing against HIM, so he pulls a white hanky, and waving it as a sign of peace, starts to leave the cave. Of course, the Mexican bandit is a bloodthirsty bastard so his band opens fire. Jonah leaps out of the cave, kills a couple of bandits and then drags Turnbull back into the cave, but not without getting a slug in the right thigh first.

Later that night, Hart & Mei Ling are having dinner in town. J.D. is telling his life story, but Mei Ling doesn't want to hear about the guns. Hart reasons with her, telling her that guns aren't evil, they are a tool to be used.

Back in the cave, Jonah has fallen asleep and Turnbull has finally figured a way to make his escape. He will use the derringer in his pocket to kill Hex and then drag the body into the open, proving that he sides with Papagayo. Just as Turnbull is about to pull the trigger, several Mexicans show up at the mouth of the cave and Turnbull shoots at them while shouting for Hex to wake up. Jonah wakes up and kills two of the three men.

Back in town, it is after dinner and J.D & Mei Ling are getting closer under the gaze of the moon. 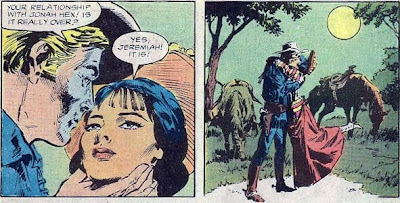 At the cave, Jonah has rescued the injured Mexican (the one Turnbull shot) and is going to use him as a human shield. Jonah holds a pistol to the man's head and all three of them make their way out to the buggy. They climb into the buggy, make their way around the avalanche and head out. Turnbull notices a letter in the seat that reads "Jonah Hex, my good friend, adios" 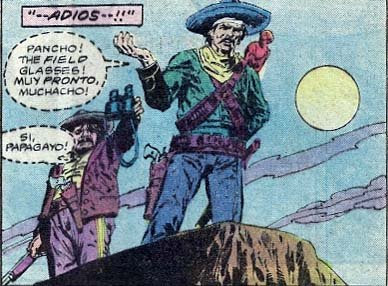 Up on the cliff, Papagayo asks a henchman for the field glasses, trains them on the buggy, and despite the bad focusing that the henchmen had put on the glasses, Papagayo is barely able to make out the dynamite strapped to the bottom of the buggy.

Of course, the dynamite goes off and the entire buggy is blown clear to hell.

Statistics for this issue
Men killed by Jonah - 4
Running total - 412
Jonah's Injuries - Shot in the right thigh
Timeline - This one takes place in one evening.

Despite the waste of pages up front, this was a good issue. It may have seemed like we were jumping from one character to the next, but it supplied a nice break between the scenes and allowed for the passage of time. Mei Ling and Hart are letting their hearts get entwined, Emmy is running away with a broken heart and if Jonah survives this, he will have a heck of a lot of surprises waiting for him!

Since Turnbull and Papagayo are teaming up in the current Jonah Hex run, it's nice to see that they weren't always so buddy buddy (and it also helps me to place the current story arc into the timeline as well). The cover is a nice one, with the huge shadow of the parrot giving a clue that El Papagayo lurks inside this issue.

Next Issue: A night on the town turns ugly, Hex & Turnbull kiss and make up, and we finally meet Zombie Papagayo!!! (just kidding on that last one!)
Posted by Dwayne "the canoe guy" at 6:00 AM

Has Jonah ever tried explaining to Turnbull that he DIDN'T kill his son? Not that Turnbull would necessarily listen. I get the impression that he needs to have a scapegoat...and that even if Jeb had lived, Turnbull would STILL be a mean old sonovagun.