Jonah Hex #83 "Blues in the Bottle Stopple in My Hand!" 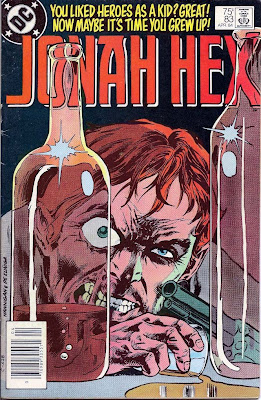 Last week I said that this would be the end of Matching Dragoons. It is & all will be explained later.

The title is from an old Blues song, according to Mr. Fleisher (who is now also the editor, having taken over from Ross Andru) and we'll learn how it fits in right quick. But first, Jonah is still beating the crap out of J.D.Hart (this issue backing up just a few minutes before last issue finishes. This seems to be a new pattern here.) After Jonah finishes up and gets yelled at by Mei Ling, he rides off into the night. But he is being watched by two thugs who follow him into the darkness.

The next afternoon, Jonah rides into town, mentally griping about Mei Ling and looking forward to finding solace in the arms of Emmy Lou. However, when Jonah gets to the hotel, he learns that Emmy has left for St. Louis and in his anger, he stomps off to the saloon.

Several townsfolk watch Jonah head for the bar and one of them asks the sheriff what HE is going to do about Jonah. The sheriff wisely says that he can't do anything until the law is broken.

Meanwhile, many miles away, Emmy Lou and her kidnappers finally stop to set up camp. That is when Emmy notices that two of her abducters are female. The ring leader, Brett, tells Camille to start cooking and Sandy to lay out the bedrolls. He orders Emmy to get some firewood and when she refuses, he slaps her right upside the head and demands she get the wood.

Back in town, Jonah is getting more & more drunk, bottle after bottle. At one point a cork is jammed in a bottle so he smashes it across the table and pours out the remainder. Suddenly there is a shout from the street. The two men that have followed him are calling him out. Well, one of them is calling Hex out, the other is telling the first one that they should wait for their boss and the rest of the gang.

The brave/stupid one knows that Jonah is drunker than a skunk and figures that the two of them can take him on. Jonah staggers out with a bottle in his hand and takes a long draw on it. He wipes his mouth on the back of his hand and outdraws both men, dropping them in the street where they stood.

Much later that night, Emmy is convinced everyone is asleep so she slowly starts to sneak away. Just as she starts to run, she is suddenly lassoed and Brett hogties and gags her before he goes back to sleep. 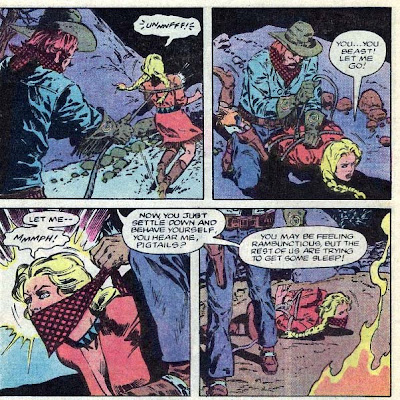 In town, Jonah, unable to obtain a hotel room, is continuing his drinking binge in th eloft of the local livery. Sinking deeper into a drunken stupor, Jonah doesn't hear the locals leading out the horses as they prepare to torch the entire structure (promising the owner that they'll all picth in to build him a new one). The place lights up like the fourth of July and Jonah is awakened by the heat and smoke. He manages to jump out a window on the lower roof, locate his horse, jump on it and take off, but not before kicking the ring-leader into a large puddle.

Later, Jonah is resting near a lake, still drunk, still bemoaning his life. He's the fastest gun in the west and what good does it do him? He has no woman, no money, no family, just a big fat nothing. He takes his matching Dragoons and heaves them into the center of the lake 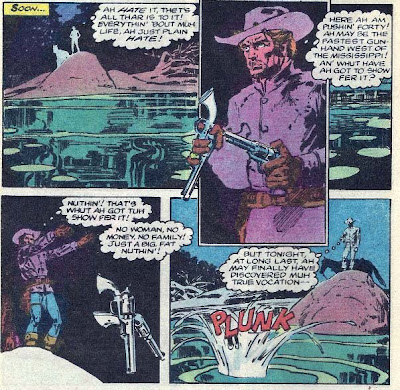 (see? I told you it was the end of Matching Dragoons! What? You thought I was...what? hee hee). He grabs a bottle that he has brought along and following in his father's footsteps, drinks himself unconscious.

The next morning, Jonah is suddenly and rudely awakened by one Catherine Rebecca Smollett, owner of Christian Temperance Farm, a place for men driven to the squalor of liquor to dry themselves out and find redemption in the Lord Jesus. Smollett picks up Jonah's hat and reads his name in the hatband. She notes that Jonah, in the Bible was swallowed by a great fish. Hex appears to have been drinking like a great fish!

Still groggy from his previous day and night, Jonah staggers up onto her wagon and allows Catherine to take him to the farm.

Back in town, the friends of the dead gunmen show up and demand of the sheriff which way Jonah Hex went. The sheriff tells them that he has no idea, but they head out to find Hex anyway.

Back at the farm, Catherine & Jonah pull up. Catherine tells Jonah that it's about suppertime and he can clean up in the bunkhouse. Jonah goes inside and pulls a small bottle out of his pocket. As he takes a swig, another resident of the farm grabs the bottle from him, telling Hex that Catherine works hard to keep that terrible poison out of their bodies. He tilts the bottle back and Jonah tosse s left hook into his jaw, sending the bottle sailing through the air. Jonah dives for the bottle, just as Cathering enters the bunkhouse. She takes the bottle and announces that dinner is ready.

Over the next few days, Jonah dries out at the farm, repairing fence, splitting wood, fixing wagons until finally the three men that have been searching for him come riding up to the farm. The bunkhouse buddy comes running to tell Jonah about the three men just as they show up using Catherine as a human shield.

Jonah raises his hands in surrender, grabs his knife and buries it in the chest of the first thug. The other two open fire and Jonah goes running for cover among the out buildings on the farm. The two thugs decide to split up, one checking the bunkhouse, the other checking the toolshed. The first looks into the bunkhouse window and... 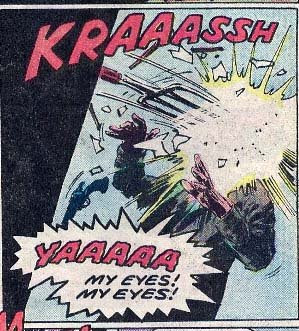 that brings the second one running, who fires into the bunkhouse. But, Jonah Hex is not IN the bunkhouse, he is on top of it and... 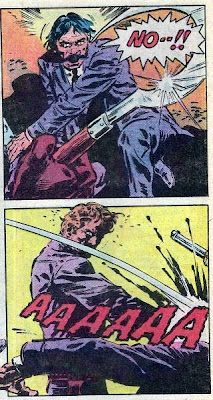 Jonah proves that he can be pretty violent even without his pistols.

Shortly thereafter, Jonah is mounted up and bidding farewell to Catherine. She says that she wishes Jonah could stay, but for the sake of the Farm, she feels that he should go. She wants him to stay long enough to be truly saved and Jonah replies that he is pretty nearly saved, least as he is ever likely to be.

Statistics for this Issue:
Men killed by Jonah: 5
Running Total: 413
Jonah's Injuries: none
Timeline: I would say this one covers about a week. So we are probably still in April 1878. I know we are because I read the next issue, but I'll cover that then.

A nice gruesome issue, pitchfork to the face, sickle to the head, ya know, fun stuff! Ed Hannigan starts designing the covers and I have to tell you that the next 9 covers are some of the best in the entire series. The perspective through the whiskey bottles, the antagonistic blurb at the top, the gruesome glare of Jonah's eye...perfect!

The story overall was a good one. Catherine Smollet reminded me of Katherine Hepburn in Rooster Cogburn and the Lady. I don't know if it was intentional, but it was a nice touch with a few slightly comedic elements thrown in when Jonah first arrives at the farm.

Next Issue: Jonah's life gets even more interesting as he ends up in Mardi Gras!!
Posted by Dwayne "the canoe guy" at 6:00 AM

I think my favorite part is the "You like heroes as a kid? Maybe it's time you grew up!" at the top of the cover.

That really is one fabulous cover. Darned good story too.