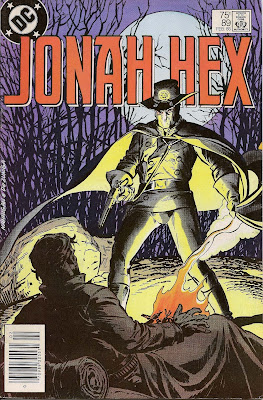 Jonah Hex is in bed at Mrs. Crowley's Boarding House with the local doctor telling him to take it easy. The doc has dug the bullets out of Jonah that Emmy put there and is demanding that Hex stay in bed, have only a bland diet and no cigars. Hex continues to protest, but the doc hears none of it & Mrs. Crowley is determined to carry out the doc's orders.

Back at Brett's hideout, Emmy is in tears but Brett keeps telling her it was either Hex or her that would have been dead. The girls finally tell Emmy that they are the only family she has left now.

Dinnertime at the Crowley house consists of chicken broth & rice and a very irritable Jonah Hex. Mrs. Crowley literally throws her arms across the door, barring Hex escape to the local saloon.

At the same time, Jonah, locked in his room, decides to tie bedsheets together and shimmy out the window and walk into town. He finally makes it to the saloon, orders dinner and starts working on a bottle of whiskey. At the bar, a thug named Quaid, takes an instant dislike to Hex and starts making trouble. He throws down on Hex only to be staring at the muzzle of Hex's pistol long before his own leaves the holster. Just then Mrs. Crowley storms into the saloon and demands that Hex holster his weapon, drop the whiskey and get back into bed this instant! Hex falters for a moment, hangs his head and complies. 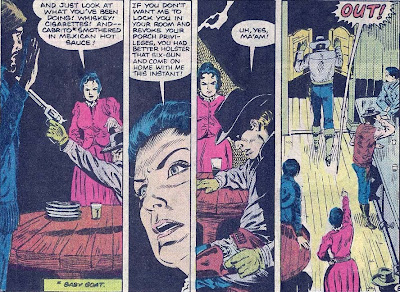 Several miles away in another saloon, Adrian Sterling is fending off the advances of a very drunken cowpoke who is getting very irate that the waitresses aren't bestowing enough affection to compensate for the water:whiskey ratio in the drinks.

Finally he starts to get rough and Adrian busts him across the chops with her cane. Several of the cowpokes buddies decide to get even but then a local card shark steps up and soundly trounces both men.

The next afternoon, the Jeremy Ashford, son of the Gray Ghost (sans costume) arrives at Mrs. Crowley's boarding house, since the local sheriff told him that is where Hex is staying. Crowley & Hex are playing gin rummy on the porch as Ashford walks up the steps. Suddenly Hex notices a rifle barrel pointing from an alley across the street and he jumps up, knocking Ashford down out of line of gunfire.

Jonah hotfoots it across the street and rushes into the alley, shooting and killing the gunman, the thug from the saloon the previous night. Ashford arrives shortly, helps Jonah to his feet and walks him back over to the boarding house. Ashford introduces himself and learns that the man who just saved his life is Jonah Hex.

That night in his room, Ashford is putting on the costume of the Gray Ghost. He is bedeviled by the fact that the man he has to kill is the man who saved his life. His whole new life has been thrust upon him, he never asked for this but what kind of son would not carry out an oath sworn to his dying father. Ashford walks down the hall to Hex's room and decides that once he kills Jonah Hex, the Gray Ghost will disappear for good.

In the room, Jonah Hex is asleep and racked by a nightmare. He is being pursued by three horsemen and he can't escape. Suddenly one of them appears in front of him and when Hex reigns in his horse he is suddenly ensnared by a lasso. Yanked from his saddle, Hex fights the ropes but the other two horsemen surround him and lasso him as well. The horsemen dismount, drawing their pistols, ready to kill Hex. They remove their hats and... 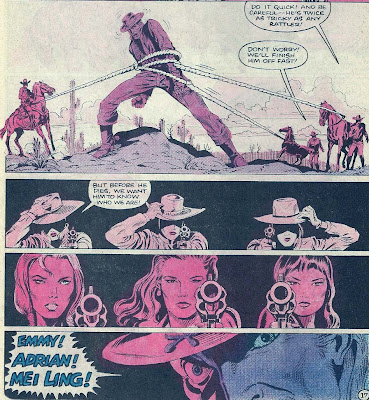 Ashford walks into Hex's room and stands over Hex. Standing over the helpless Hex, Ashford realizes that shooting a sleeping man is a an act of a coward and so is hiding behind a mask. He decides that he will kill Hex tomorrow, face to face and man to man.

In that saloon many miles away, the card shark, Mr. Erdnase, is escorting Adrian home after another night of work. She thanks him and he makes a lunch date with her for tomorrow. Adrian is still bothered by her amnesia and quietly walks up to her room for the night.

Next morning finds Mrs. Crowley tucking blankets around Jonah Hex while he rests in a glider swing in the front lawn. Hex is sitting there when Ashford walks up and sits in the swing. Ashford starts to tell Hex about what brought Ashford to town and that he is the Gray Ghost. Hex explains that he already knows. When Hex knocked Ashford down yesterday, he saw inside Ashford's bag and recognized the mask. Hex knows that Ashford isn't old enough to be the Ghost, therefore..

Ashford suddenly pulls a pistol on Hex and announces that he has to kill Hex. Jonah calmly tells Ashford that there ain't no life in what is about to happen. Hex has spent his entire life in blood and guts and killing and that is all he has known & all he will ever know. He tells Ashford to throw away the Gray Ghost and live his own life. Ashford says that Hex is only saying these things because he is scared to die.

Hex, gun barrel to the eye, states that is isn't afraid of death. Ashford cocks the hammer and then jumps up, storming away. Cursing Hex for saving his life, Ashford runs into the boarding house shouting that he has failed his father. Hex slowly pulls out a pistol from beneath the blanket and quietly drops the hammer.

Up in his room, Ashford is convinced he is an unworthy son and places the pistol to his own head and then ends his torment. 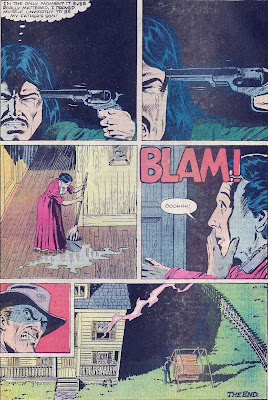 Statistics for this Issue
Men killed by Jonah - 1
Running Total - 422
Jonah's Injuries - Recovering from bullet last issue.
Timeline - This one covers three days. I would say that we are nearing the middle of July 1878.

A pretty good story, one about honor and the turmoil that it can cause when two types of honor conflict within an individual (Ashford) when he tries to keep his word to his father, honor Hex for saving his life, yet retain any of his own identity. The end where Ashford ends it all is particularly effective.

The Texiera art is a lot cleaner that what we were used to with DeZuniga and gives us a preview of what we'll see in Hex. Some of the characterization of Jonah was rather lacking. Having him buckle so quickly to Mrs. Crowely was uncharacteristic. The nightmare scene was one of the best parts of the book.

Next Issue: The return of JD Hart, the return of Mei Ling, more of Emmy Lou and Gray Morrow taking over the art chores.
Posted by Dwayne "the canoe guy" at 8:49 AM

This looks very good, and I really ought to get it.

Maybe all Jonah wanted was a bit of mothering.

Anonymous said...
This comment has been removed by a blog administrator.
1:36 PM

Jonah Hex is pretty straight in it's prevarication. Jonah Hex witnessed his family die at the keeping of Evangel Turnbull. Unfortunately, for Hex, Turnbull died mysteriously in a hotel dismiss...or did he. Turns out Tunrbull is relieve vital and a danger to the US. Now, Prophet moldiness get his penalise and reserve the US.