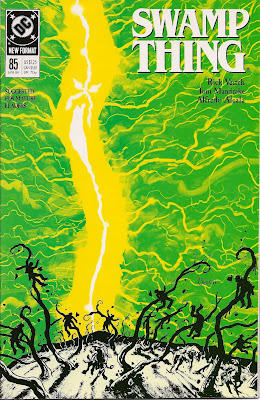 During this storyline Swamp Thing is traveling backwards through time. Issue 83 had Swampy leaving WWI (heading backwards) and #84 was concerned mostly with his supporting cast, so we come into #85 with almost nothing connecting to a prior issue.

It starts off with Firehair & Hawk, son of Tomahawk riding along until they come upon a horrific sight. Dozens of horses and men have been skewered by huge throny plants that seem to have sprung up from the desert with incredible speed. Both men, appearing to be elderly happen to find one survivor... 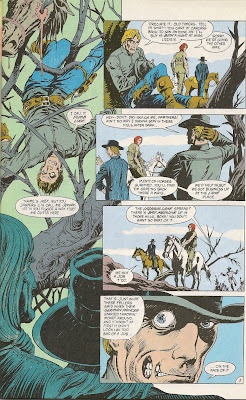 With a reference to San Antonio, this story appears to take place in Texas. Firehair & Hawk are heading for the ranch of Lazarus Lane. Watching over the ranch is Bat Lash, Madame .44 & Johnny Thunder. They also have Superchief and nearby is a member of the Black Bison cult. Things get kinda weird when Black Bison summons a tornado that appears to be Swamp Thing and then, of course, El Diablo shows up.

I'm just gonna recap what happens in the rest of the story because this is a Jonah Hex blog, not really a Swamp Thing blog.

More exposition follows that would be of interest to Swamp Thing fans. Sadly, Swampy & Jonah Hex do not appear together in this issue. This story, sadly, is a victim of the DC Dumping Syndrome which basically states that is a hero is time traveling he will always run into a DC hero from that time period, no matter where he is and no matter what.

In the end, Jonah Hex shoots nobody and doesn't get hurt. Yawn. 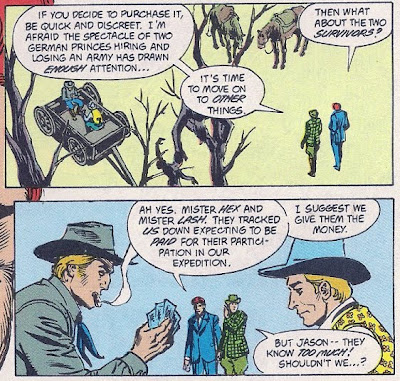 Rick Veitch's and Alan Moore's issues of Swamp Thing are detailed at my Swamp Thing Annotations site
http://tinyurl.com/2jc79
Corrections and suggestions are welcome!

Greg, can you verify what is in #83? Is there anything leading into this story or any mention of Hex?