Weird Western Tales #71 "And the South Shall Rise Again 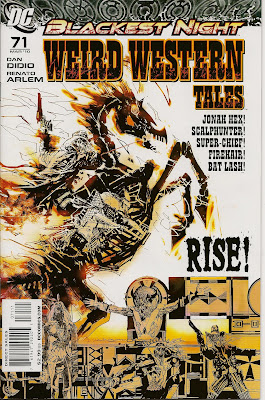 I know I'm jumping out of my regular order for reviewing but I have to get this done. I have one word for this issue.


First, Ranato Arlem is the artist? Oh, GAWD how I love to hate this man. I'm ready to fire up the scanner even before I open the book in anticipation of the Colorforms work that he does. So let's see how it goes.

Opening shot is of a graveyard is what is clearly Monument Valley, however, the text says "Here in the South..." WTF?!?!?! Let me be the first to state that Ranato Arlem is a dumbass and figured that since HE has never been outside his basement and has no idea what "the South" looks like and since he is drawing a "western" he'll trace a Western photo and convince all of us that it is in the South.

Also, let me be the first to state that Mike Carlin, editor, is an even BIGGER dumbass for allowing an error this size to get through to the printer. AND while I'm at it, let me toss Dan Didio onto the Dumbass truck since he is not only the writer but he's the HEAD OF D-FRIGGIN-C COMICS!!!!

So, the story starts with a man placing flowers on the grave of Quentin Turnbull and then getting a cell phone call. He is angry and rides back to the town of Illumination "the South's best & brightest". Now the town of Illumination, not only sits clearly in Monument Valley, it also consists solely of fakefront western town buildings, like what you see in WESTERNS!!!! 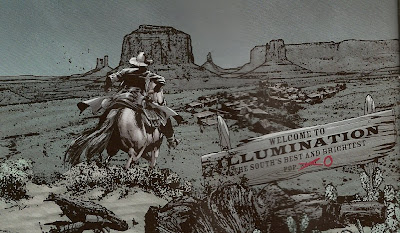 Anyway, we're now on page three and I have only seen two instances of photocopying (alert the authorities!!). The man rides his horse into town, dismounts and starts talking to Alicia, a woman in a lab coat. They run into a saloon and then enter a weird futuristic elevator (guarded by men with rocket launchers!) and descend, talking about someone who is bringing something to them. During this we learn the man is Joshua Turnbull, the great-great-grandson of Quentin Turnbull. (that noise you hear is my head asploding!! I'll cover THIS later)

They get off the elevator and are greeted by Simon Stagg, the Ray, and a bunch of Stagg's flunkies. It seems that the Ray has picked up one of the black rings (he found it on Don Hall's grave), encased it in light and brought it here so that Joshua Turnbull can unlock the mighty power in the ring. Seems that Stagg has financed Turnbull in the hope of finding alternative fuel sources and even "put it close to your family home for inspiration." Is he talking about Richmond, Virginia? You know, where MONUMENT VALLEY IS?!?!?!?

Anyway, Stagg leaves The Ray and Turnbull with the ring "a half mile underground with concrete & steel-reinforced walls." And then they start getting some weird power fluctuations and a guard comes running in stating that the rings are falling everywhere. In a huge action scene (snort) the wall caves in and the dead come stomping in and Scalphunter shouts that he hates every white man (even though he himself is white) and starts taking scalps.

The Ray is able to hold off several of the Civil War dead but then the Trigger Twins show up along with Super-Chief. A Stagg flunky is able to grab the black ring and get it to Turnbull right before Firehair rips out the flunky's heart. Turnbull and Alicia take off down the hall just as The Ray puts out a huge blast of light (does he die? How should we know? Didio is writing this!)

Turnbull, being the southern gentleman, realizes that something is coming down the hall toward them so he rings for the elevator and then shoves Alicia out into the hall just as the doors close. Alicia turns and is face to face with Black Bat Lash, who rips the heart from her chest. 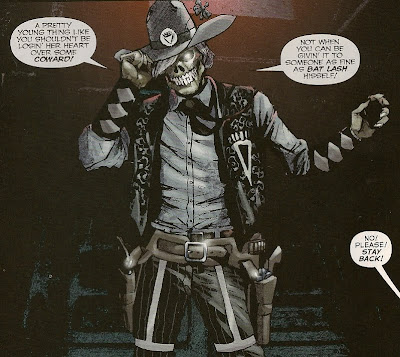 Topside, Turnbull grabs a rocket launcher from the hands of a dead guard and heads out into the street. There he is confronted by the Black Jonah Hex who demands the ring from Turnbull. 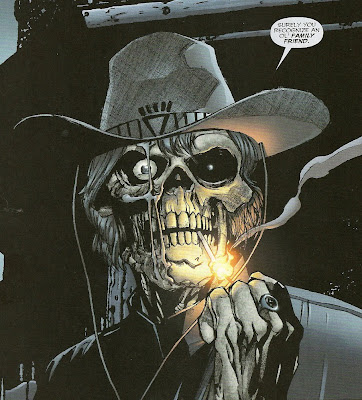 Joshua lifts the rocket launcher and fires, bringing down the entire church that Hex is in front of. Joshua starts gloating that he finally defeated Hex and that the Turnbull's have always been "a whipping dog ever since you killed Quentin Turnbull." (where the hell did THAT come from?)

Of course, Hex being Hex and undead and all, he survives and comes out of the burning church and starts shooting at Turnbull, winging him in the leg. Turnbull is laying on the ground, Hex standing over him asking what would Quentin Turnbull think of Joshua. That is answered when Black Quentin Turnbull himself shows up. Joshua pleads to Quentin to help stop Hex but Quentin suddenly draws a pistol and shoots Joshua dead.

Blech! A stupid stupid throwaway crossover event story that doesn't matter a hill of beans in the DCU. However, we DO learn a few things:
This whole thing was a waste except for the cover and the zombiefied Bat Lash & Jonah Hex.
I just hope that this doesn't play into the Zombie-Confederacy-resurrected-by-Turnbull crap that is plaguing the Jonah Hex movie.

UPDATE: After reading some comments by Susan Hillwig I have to agree that this doesn't prove that Jonah is finally buried. The way the rings are working, they appear to be pulling corpses from wherever they may be and transporting them to wherever they need to be. So #6 should be struck from the list.
Posted by Dwayne "the canoe guy" at 6:00 AM

Well...there' the south and then there's the SOUTH! For example, Arizona (and Monument Valley) are south of...um...Utah! That counts, right?

I can't help it, I rather enjoyed this. It was ridiculous, and over the top, and made no sense whatsoever, but I just like Simon Stagg showing up. And apparently, you should be more careful about where you locate your lab since there were a LOT of dead people out there.

An amazingly stupid book. The whole Blackest Night series leaves me numb but this issue is the bottom of the barrel. The guy, at my comic store, a Scalphunter aficionado, tried to talk me out of buying it.

The problem is, a lot of these new comics guys, they don't give a stuff about the characters we love. It means nothing to them. All they know about are lousy, humorless superheroes, alternate worlds (zzzz), increasingly dumb and desperate money-spinning 'crossovers' and ultra-cliched war-ravaged post-apocalyptic worlds. It's like the way they wrecked the Fawcett Captain Marvel. Don't get me started...