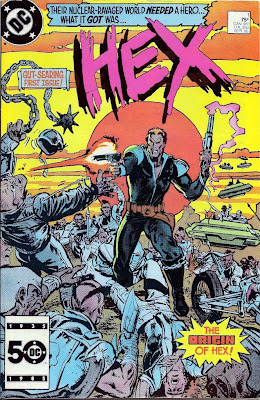 Jonah Hex wakes up to find himself asleep on a saloon table. He suddenly remembers Brett & Emmy Lou and then jumps up only to find them gone from the saloon. He is trying to clear his head and into the saloon strides El Papagayo. The Mexican bandit whips out his pistol and fires. Jonah dives for cover and quickly returns fire but finds that he has blown the entire top off an El Papagayo robot.

There is a sudden cut to a control room of futuristic operators monitoring Jonah Hex on a large screen.

Jonah attempts a second shot but the gun is empty and Jonah realizes that the gun is some sort of fake. He runs out of the saloon and into a futuristic corridor and he finds several armed guards rushing towards him. Jonah attempts to flee but he he is stunned by the ray-rifles the guards wield.

The guards drag Jonah into a large room with a man sitting high above at a control station.The man is Reinhold Borsten. Jonah awakens and Borsten welcomes Hex to Seattle and starts explaining that he is a student of war and all conflict. Borsten shows him holographic projections of Hannibal and the Civil War. He then displays more current history, specifically the great nuclear holocaust that has decimated the Earth. Jonah goes into an overloaded shock and passes out.

When Hex comes to, he finds himself in a large glass tube that is filling up with gas. He feels his legs going numb and grabs his pig-sticker from his jacket and uses the handle to bust his way out. Jonah is in a long room filled with hundreds of military men, all encased in the glass tubes. He finally locates a display case of pistols and he breaks the glass grabbing the guns but setting off an alarm in the process. Jonah doesn't understand what the sound is, but beats a hasty retreat nonetheless.

The alarm draws the attention of several guards, one of whom Hex shoots in the face and then Jonah's path is blocked by a force-field across a doorway (it appears to be red lightning to Jonah.) Another guard rounds the corner and Jonah grabs him and flips him into the force-field.

There are more guards coming down the corridor. When they round the corner they see Jonah crouching in the darkness and open fire, however they have been fooled into shooting their fallen comrade (upon whose head Jonah placed his Confederate hat.)

In another part of the huge compound a radioactive waste truck is leaving the facility. They get clearance from the guards and start driving across the barren wasteland and we see that Jonah is hanging underneath the truck. An alert comes across the truck's radio that there is a bounty of 2,000 soames for Hex's return. Just then the waste guy riding shotgun sees Jonah drop from underneath the truck and take off running. The truck attempts to run Hex down but he stops, spins and pumps two bullets into the workers. As the truck swerves and crashes, Hex note that the .44 tends to pull slightly to the left.

He takes off cross country, trying to figure out his situation. Remembering that Borsten mentioned Seattle, Jonah says that he has never been there, but he's heard that it has over two thousand folks in it and if he is truly in Seattle, then he has traveled over a thousand miles overnight. Jonah then stumbles upon three men threatening a blond woman. She manages to fight back but to no avail. Jonah steps in, tossing one of the men and then pulls out his pistol. Then the men allow Jonah & the girl to escape. 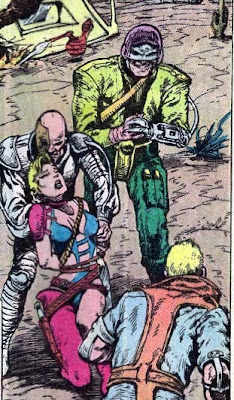 As they walk off she mentions that her arm is sprained and that Hex will have to drive her motorcycle. Of course, Jonah has no idea what to do and she instructs him, asking how he normally gets around and he replies "Horse."

They finally get the cycle started and get going with a fair amount of wobbling. The girl says that her name is Stiletta and asks Hex for his. She also says that he'll need to get a rado suit or the next acid storm will burn his flesh right off. Stiletta guides Hex back to her gang, the Reapers.

Once they get to the camp, Hex learns that the gang is trying to take over a water site because the last war laid waste to a majority of the clean water.Being a good hostess, Stiletta invites Jonah to dinner and then she introduces him to the leader, Falcon. Falcon invites Hex to side with them on the upcoming water war and Stiletta explains that Jonah saved her hide and then gives Hex a thank-you kiss. What Jonah doesn't know is that Stiletta is Falcon's woman.

Meanwhile, the news of Jonah's escape is being revealed to Reinhold Borsten who says that this situation needs to be rectified by the time the hardware from the Viet Nam conflict arrives.

Fifty miles from the Reapers camp, the folks that have the clean water are gearing up for the inevitable onslaught (thanks to an informer that they planted in the Reapers ranks). Of course the Reapers arrive right on schedule and by this time, Jonah has a sneaking suspicion that he has thrown his lot in with the wrong side of this fight.

The battle commences with both Jonah and Falcon having their vehicles damaged and they take shelter in a nearby building. A member of the invaded party sets the building on fire but Hex and Falcon make their escape out a back window. They both head for a hover cycle with a sidecar and as they take off it starts to rain.

Falcon mentions that it is an acid storm and that Hex will die (as he uncouples the sidecar Hex is riding in). As Hex drops to the ground, he grabs Falcon off the cycle and they both start fighting on the ground. Jonah finally beats Falcon senseless and since the acid has started burning his skin, Jonah peels the clothes off of Falcon, runs to the hover bike and jumps aboard. As Jonah starts to drive off, Falcon awakens and starts screaming for Hex to not leave him but.... 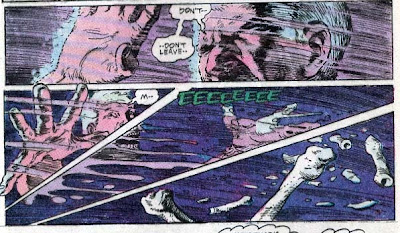 Jonah drives for a short while and the rain finally stops but just then.... 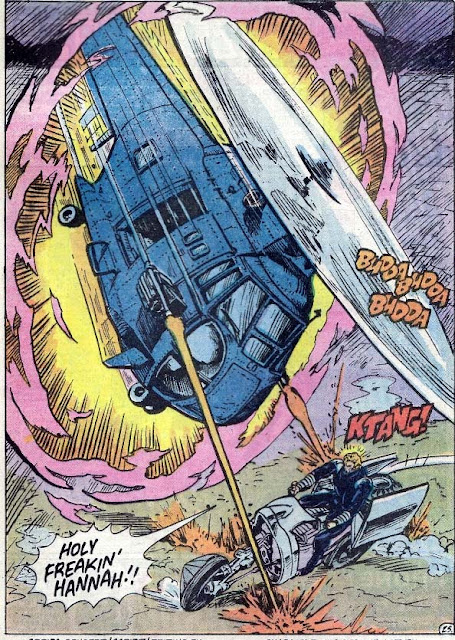 Statistics for this Issue
Men Killed by Jonah - 5
Running Total - 433 (428 past, 5 future)
Jonah's Injuries - None
Timeline - This story appears to happy completely within the space of one day. So far we don't know what year it is.

I really enjoyed Texeira's artwork on this one. He has a very cinematic style and he's not afraid to draw large crowds of people and the folks that he presents do each have their own stylings (facial scars, clothes, hairstyles). When I first read this I was a little miffed at how quickly Jonah took to navigating a motorcycle, but now I see that there is some wobbling depicted in the artwork. I did like that Jonah is having to re-learn who/what is right and wrong in this new world and through no fault of his own he threw in with the wrong bunch.

I did enjoy this book a lot and was pretty jazzed about the new direction that Jonah Hex found himself. Of course, I was thinking that any Jonah Hex was better than no Jonah Hex.

Next Issue: Viet Nam, robot dogs, giant wheels and the DEATH of Stilleta!!
Posted by Dwayne "the canoe guy" at 6:00 AM

I've never read the futuristic Hex stories, so this is a treat.

Holy Freakin' Hannah indeed. I really wanted to like this series, I really did. I made it in about four issues until the anti-gravity hovercrafts and men in capes did me in. I look forward to seeing how the rest of the run went. Thanks Canoe dude.

Jim, Well you really won't hear any complaints from until Keith Giffen starts doing the artwork and then the reviews will be "AAAAAARRRRRRRAAAAAAHHHHHHGGGHHHH!"

Sally, Hold on, you're in for one heck of a ride.

Jonah Hex as Mad Max, not so bad an idea in the face of declining sales, and allows for some amusing What the heck is this humour from Hex. Cool logo too

I want to say, I love your blog. I've been reading it for over a year and it's absolutely fantastic. Not just for the chronological recaps, but because you give us your opinions and perspectives from WHEN these comics were being published originally. I was 5 years old when HEX started coming out, and I wouldn't discover who Jonah Hex was until I was a little older and my great Uncle gave me all of his old comics. My first Hex story was from a Christmas Special, and the second one was seeing him on Batman: The Animated Series.

I've wondered, as I've grown and gotten more into comics and especially the history of comics, how people who WERE reading at the time of a big status quo change (like the Post-Crisis DC Universe) reacted. You can see some of it in old letter columns, but this sort of first-hand telling is the best.

I'll admit that I wasn't looking forward to this chapter in Jonah's existence but I'm going to read your (as-usual) excellent reviews with a fresh perspective. I'll no longer refer to Hex as the book that sent me screaming and crushed a bit of my childhood.

I turned 14 in 1985 but IIRC Hex's first ish came out in June, 1985 given the standard three month difference in release dates and cover dates. Am I correct?

Hi Dwayne. As a regular JONAH HEX reader first time round, I remember being horrified at the psuedo-Mad Max shenanigans of HEX - in fact I stopped buying it after the first issue. A couple of years back I picked up the whole series for a few quid. I must confess that I was pleasantly surprised by some of the early ones - they're not nearly as bad as I thought they might be - and pretty entertaining. But there comes a point where it goes wrong - about when Geffen takes over on the art (crikey, his art is dismal - no understanding of how to tell a story with pictures) - and you suddenly get the sense that Fleisher knows the days of HEX are numbered, and writing-wise he throws in the towel. Looking forward to revisiting it all, though...