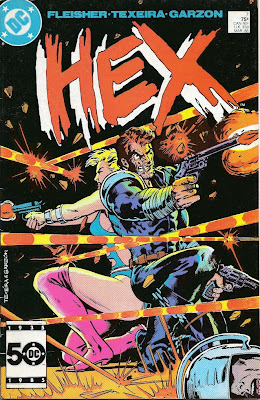 Brolin is holding a gun on Hex after Jonah has pretty much made a mess of the amusement pier. Just then the owner of the pier comes up and starts harping on Brolin for making a mess of things, the pier pays protection money to the Conglomerate, after all. Jonah takes advantage of the distraction, dives for his dropped pistol and pumps two slugs into Brolin.

That may have saved his life, but Hex is still taken captive by Borsten's goon squad. A Conglomerate spy at the pier reports back to the Conglomerate that every thing is going to plan.

Back at the Needle, Borsten's goons are not having any luck locating Stanley Harris, who is hiding in the air passageways overhead, but, sadly, so are a ton of giant rats. The rats catch up to Harris and while he right overhead of some goons, the rats swarm him and start taking large bites out of him.

Elsewhere in the Needle, Jonah finally arrives and is returned to Tube Town, the room full of statis chambers that Borsten uses to 'store' all of the people he has kidnapped from the past.  Jonah is loaded into a tube and gassed unconscious.

Life goes on in the Needle, where we see one of the cooks taking out a garbage hovo. Once outside while he is dumping the load, Stiletta ambushes him.

In Tube Town, the Conglomerate's Needle spy walks up to the guard and asks to see Hex. When the guard asks for the authorization, the spy (Percy) pulls out a pistol and kills the guard. He then evacuates the gas from Hex's statis chamber, but the guard is only mostly dead and he manages to push an alarm. Percy quickly explains to Hex how to use a timed grenade to blown up the Time Machine after he uses it. Just push the button and fifteen seconds later...

TOO LATE! More guards show up and shoot Percy. As Percy falls dead, the grenade, armed, bounces down the hallway towards the guards. 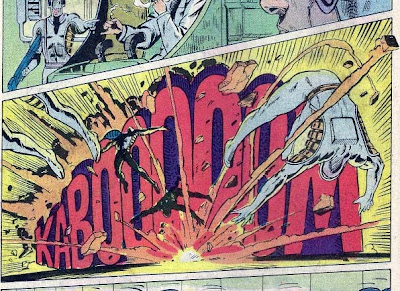 Of course, the garbage hovo returns, this time with Stiletta in disguise but the guards are getting suspicious only to be interrupted by the explosion from the grenade. They take off for Tube Town, leaving Stiletta. As she shucks her disguise a ceiling panel opens up and the rat gnawed body of Harris falls to the floor. Harris, barely conscious recognizes Stiletta and comments on how great the androids are in the future.
Stiletta replies that she isn't a droid and she never saw Harris before in her life.

Back in Tube Town, Jonah is making a quick retreat for the Time Machine.

Harris and Stiletta make their way to Tube Town and find Jonah already gone, so they head to the Time Machine to get Harris back to 1968. Harris stops for a moment and shoots open all of the statis chambers, releasing several Roman soldiers and Asian warriors. Of course, things start getting worse as we hear loud rumblings from the structure of the Needle and a chain reaction has been started that the maintenance crew can't get a handle on.

Jonah has made his way to the Chronal Chamber and starts working on resetting the Time Machine so he can go home. Reinhold Borsten shows up brandishing a pistol ready to drop Hex where he stands. But then Harris and Stiletta show up and gain the upper hand. Harris makes some adjustments on the time machine and fires it up while Stiletta holds her dad at gunpoint. The machine fires up and Harris and Hex jump onto the Chronal platform but some guards come crashing into the room and one of them shoots Stiletta. Hex leaps from the platform and kills both guards as Harris fades into the past and Borsten hotfoots it outta the room.

Stiletta only got a flesh wound. She staggers to her feet and tells Hex to get on the platform, the way the Needle is shaking, it's probably going to collapse and the chain reaction that is happening is going to kill the power at any moment. She rests the machine and Jonah tries to pause long enough to tell her something but she shouts that he has to go now. Jonah runs for the platform and as he gets there the machine sputters and then explodes.

The Needle is indeed collapsing, Jonah grabs up Stiletta and starts making tracks out of there. Borsten, we find, is in an elevator, heading to a hidden escape vehicle, but there is a sudden explosion of flame into the elevator shaft and we see Borsten engulfed in flame, screaming his head off.

Hex and Stiletta find the hovo deck, she shoots the lone guard and as they power up the craft, the ceiling starts to collapse, leaving a huge hole for them to fly out of. They manage to barely escape the Needle before the whole thing explodes all to hell and back. As they fly off we see several dozen people dragging themselves out of the wreckage, among them Roman centurions, American Indians, Chinese Monks, and a few Samurai.


Statistics for this issue
Men Killed by Jonah - 5
Running Total - 460 (428 past, 32 future)
Jonah's Injuries -none
Timeline - Same day as last issue. We are still on day three in the future.

Wow, this was one hell of an issue packed with tons of action and everyone we have met so far jammed into a single issue. The destruction of the Needle, the death of Borsten, Harris's return and the end of the time machine, coupled with several explosions and a good body count, places this as one of the better issues of HEX. It appears that we have wrapped up the Reinhold Borsten story and there appears to be no chance of Jonah making it back to the past. The only thing left is to thrust him out into that big wide 2050 world and see who loses.

The last panel with all of the warriors from across the ages made me want to know what happens to all of those folks. I guess Seattle ended up looking like a round of Heroscape. 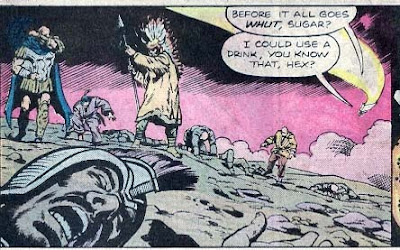 Next Issue: Jonah looks for some badly needed soames and ends up in the Shooting Gallery.
Posted by Dwayne "the canoe guy" at 12:04 AM