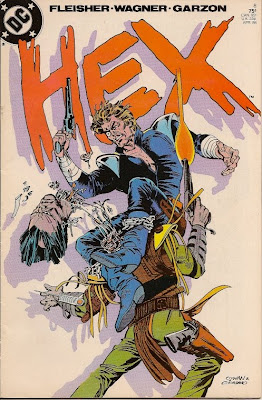 
Well, the hovo eventually ran out of fuel, but Jonah Hex and Stiletta Borsten managed to land it safely. After getting precise directions as to what type of fuel they need, Jonah head out on foot to the next town. Eventually Jonah makes it to the next berg and ends up at Jameson's Auto Parts. Jameson says he doesn't have that kind of fuel, but he might be able to salvage some from an old wreck out back. Jonah heads down the street to a bar to wait until the fuel is available.
Jonah doesn't even make it to the bar before three thugs step up to take all his soames. He throws his wallet over the head of one and then opens fire while they are distracted. The thugs return fire, but Jonah does the drop, roll and shoot, ending up plugging all three. However, one of them jumps up, grabs the wallet and jumps on his motorcycle. Hex realizes that he has been hoodwinked by body armor once again, takes aim, and CLICK. Outta ammo.

The thug drives off as a crowd gathers, astonished at Jonah's marksmanship. Jonah mentions that he is now flat broke and one of the crowd mentions that anyone that can handle a firearm the way Hex does can earn some easy money. He just needs to go see Mabel at Lovey-Dovey Firearms Supply.

Jonah beats a path down the street to that establishment and inquires about the 'easy money'. Mabel asks to see Jonah's weapon and is astonished to see the fantastic condition of his Smith and Wesson .38-40. She offers to show him a .44 auto Mag but Jonah spies a pair of .357 Magnum Ruger Blackhawks.

Mabel says that he should be able to easily find ammo for those. Jonah is examining the pistols and asks Mabel why she has no security working is such a dangerous business. Mable points to what appears to be a small cannon mounted on a swivel hooked to a track that runs the length of the store. She tells Hex to stand perfectly still as she tosses an empty box in the air and pushes a button on a strap in her palm. The gun swivels, tracks the box and then blows it to pieces. Mabel then invites Hex out back to try the Blackhawks on the outdoor range.

Of course, we go elsewhere to find Stanley Harris picking himself up out of a swamp where the Time Machine dumped him. He tries to get his bearings to find out if his is really in 1968 Viet Nam. Suddenly an arrow slams into a nearby tree and Harris finds himself staring down a Feudal Japanese archer.

Behind Mabel's gun store, she is showing Hex the target range. The range consists of moving targets that pop up and fire back a beam of light. Jonah guns down the first few targets and then Mabel turns the range onto high speed. Jonah is just getting warmed up and hits every target perfectly. Mabel is astonished and tells Jonah that he can compete is a slightly more, uh, sophisticated version of the target range and score a lot of soames. Mabel offers to spot the entry fee and they will split the winnings.

Jonah takes the offer and heads off to the Shooting Gallery. The place is like a bookie's dream with dozens of folks placing bets and watching several TV screens. The owner of the gallery tells Hex that he has to follow the arrows on the floor, can't double back, kill all the targets and he wins, if he takes a hit he loses. Jonah heads in to what is a large deserted factory.

Right off the bat he shoots a robotic target on a catwalk and then plugs one popping out of a floor trapdoor. As he continues along the path, he comes upon a conveyor belt that has a target heading towards him. Suddenly the rotten floor fails beneath Hex and he falls to the floor, barely avoiding the shotgun blast from the target. It's then that Hex realizes that these targets don't just shoot beams of light and that he has been hoodwinked.

He hears the doors lock far behind him and in the betting area the action heats up as Jonah has 500 - 1 odds of getting out. As Jonah continues on he avoids dual floor flamethrowers and then climbs into a service elevator. Back in the betting area, one of the workers notifies the head boss that they have trouble since Hex is getting farther than anyone else.

The Shooting Gallery dispatches some human thugs to get rid of Hex and as Jonah keeps taking out the targets. The Gallery owner hits a switch that kills all of the TV screens. He explains to the betting crowd that it's a technical failure and they are working on it.

as come upon an area that looks like a slaughterhouse with an overhead conveyor belt comprised of large meathooks. As the hooks travel, there is a target hanging from one of them and it opens up with a machine gun. Hex dives for cover and waits, determining that that the target is firing about fifty rounds with a one second pause between bursts. Jonah dives out and takes out the target, but he is suddenly taken down by one of the human snipers dispatched by the Gallery.

Jonah falls to the ground and the sniper stands up and gloats. Just then Jonah sits up and shoots the man from the catwalk. The sniper falls backwards through a window, the other sniper sees this and comes running. He rounds the corner and opens fire on Jonah Hex's body laying on the floor. Sadly for him, Jonah has placed the target on the floor and taken the targets place on the meat hook. Jonah finishes the job with one shot.

Back in the betting area, Jonah Hex kicks open the door to the amazement of the owner and the cheers of the betting crowd. Hex takes the soames, and knocks the snot out of the owner. The crowd rushes Jonah asking for his autograph.

Back at Mable's she is very surprised to see Jonah as he strides in, belts her across the chops with the sack of soames. He then grabs her trigger switch, nabs his share of the soames and helps himself to an arsenal of weapons and ammo. As he leaves he is secretly watched by two men in an alley.

Shortly Jonah is heading back to the hovo on a motorcycle that he purchased but he finds that Stiletta is gone and it appears that there has been a struggle.

Statistics for this Issue
Men killed by Jonah - 4
Running Total - 464 (428 past, 36 future)
Jonah's Injuries - Shot in the left shoulder
Timeline - Still the same day as previous issue. Still day three? Or should we suppose that Jonah and Stiletta traveled for an evening prior to this issue and call this day four?

I enjoyed this issue quite a bit because there was a lot of action and we got another glimpse into the working of this society. For some reason the 80's version of the future was always a lot of fun because how far can society degrade but still hold together? That's always a fine line to walk.

I'm glad to see that we have Jonah dealing with the semi-small towns in the future, rather than just the Needle and the dangers in the Seattle desert. Of course, Jonah eventually gets to the larger city and things get even more complex.

Next Issue: Jonah continues the hunt for Stiletta and takes on the dangers of the Gated Community!!!
Posted by Dwayne "the canoe guy" at 12:50 PM