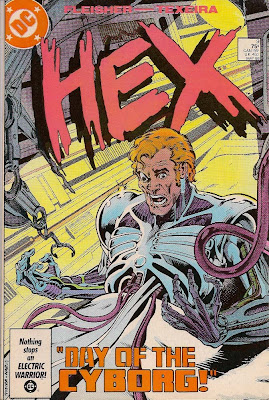 Jonah cannot locate Stiletta after she was mysteriously abducted and we find him sitting in a bar tossing back a few. In a typical Jonah Hex fashion, he is downing drink after drink after drink until he is interrupted by three thugs who are spouting off about how Jonah beat the Shooting Gallery earning ten thousand soames. They ask for a demonstration of Jonah's skill, in a rather threatening manner, and Jonah, drunk or not, skillfully obliges by killing all three. But just then we spy another thug drawing a bead on Jonah, but the thug is knocked out by the vocalist of the bar band.

The vocalist, a fella by the name of George Arthur but traveling under the moniker of Flame, advises that they both make tracks out of the bar before some more of the thugs friends show up. As they walk the streets, Flame is talking about the downward spiral that society has taken and that he and his fiance, Faythe, are going to join a gated community outside the city. A small establishment called Elysian Meadows that sounds just wonderful.

In short order, Flame and Jonah arrive at a parking lot and Flame gets on his motorcycle and takes off but his guitar falls off unnoticed. Jonah picks up the guitar and decides to track down Flame in the morning and return the instrument.

The next day we find ourselves within the domed gated wonderland that is Elysian Meadows. Within the community, everyone is happy and they are greeting not only each other but also a Dr. Adamant, the creator of the community. Adamant is speaking with an aide when we spot Flame riding down the street on his motorcycle. Adamant asks the aide about Flame, but the aide states that George Arthur is engaged to one of their residents and that his arrival has been anticipated.

Flame jumps off his bike and is greeted by Faythe but Faythe has cut her hair and is wearing normal clothes. She leads Flame into the house where two large armed guards apprehend Flame despite his screams and struggles.

Some time later, Jonah Hex is outside the gate trying to get in to return Flame's guitar. The guard is doing typical guard things with his list of residents and ongoing denials but then spots George Arthur under the new arrivals. The guard tells Jonah that he can enter but he first has to surrender his weapons. Jonah starts to drive past the guard, but the guard reaches out, grabs Jonah by the throat and hoists him off the cycle. Fighting for air, Hex draws his pistol and fires, blowing the guards arm clean off but we find out that the guard is a robot. Hex jumps onto his cycle and speeds off into the dome.

Inside the dome other guards have been alerted and start to close in on Hex. Jonah dismounts and opens fire, taking down several of the robot guards. As Jonah runs through the streets, the members of the community appear oblivious of the carnage all around them. Jonah ducks behind a house and starts reloading when Flame walks up. Flame's hair is cut and he is wearing normal clothes. Flame suddenly turns and shouts out to the guards that he has found Jonah Hex.

The captured Jonah hex is taken to the company of Dr. Adamant, who proves to be a master of exposition. Adamant talks of the construction of the cyborg control force (so they WEREN'T robots!) and that mankind has not yet evolved to the place where they can be trusted to maintain their own free will. Therefore new arrivals to the wonderful world he has created are outfitted with a brain diode implant that keeps the residents in a passive state. Of course, with everyone being so laid back, the good doctor was forced to create an army of cyborgs to guard the establishment.

And, of course, since Jonah Hex is a natural born fighter, Dr. Adamant has plans to turn Jonah into a bionic cyborg. So they beat the tar out of Jonah, strap him to a table and wheel him into surgery. Once in surgery the stupid stupid doctors make the mistake of getting the surgical laser within kicking range of Jonah. He therefore kicks the living bejesus out of the laser, sending it twirling crazily and loping off an incredible amount of cyborg limbs.

Hex then pulls a small four-shot derringer out of his boot, unstraps himself from the table and opens up, giving himself enough time to work the controls on the operating room door, blast the controls, run through the door and then close the door from the outside. Jonah then beats a hasty retreat down the hall.

Jonah finally locates Dr. Adamant and when the Doc starts advancing on Hex, Jonah shoots him point blank. Sadly, the bullet bounces harmlessly off Adamant and then the doc backhands Hex with unbridled fury. Adamant then lifts Hex one-handed and throws him across the room. Jonah manages to grab a handy flamethrower and opens up with it.

Dr. Adamant, his flesh burnt off, continues to advance on Jonah because Dr. Adamant is not a cyborg, but a full-blown robot. Adamant grabs a section of the wall, rips it up and throws it at Hex, who dodges it.

Meanwhile, the brain-addled Flame and Faythe are bringing flower to Jonah to celebrate his surgical recovery and addition to the cyborg guards.

Jonah Hex continues to flee from Adamant and gets a huge air-lock type door between him and the robot. Adamant won't be stopped and rips the door from the frame and then grabs an axe and starts swinging. In a rage of anger, the robot throws the axe, severing some electrical cables on the far wall. Adamant grabs the axe by the wooden handle and starts swinging again, getting closer and closer to Hex. Just as he is about to deliver the death blow, Flame and Faythe enter the rooom asking if they can visit Jonah.

Adamant is distracted for a second and Jonah leaps up, grabs the electrical cable and throws it at the robot, which results in the instant melting/vaporization of the robot. Jonah then searches around the room to find the mind-control switch and flips it off. Immediately Flame and Faythe come to their senses. 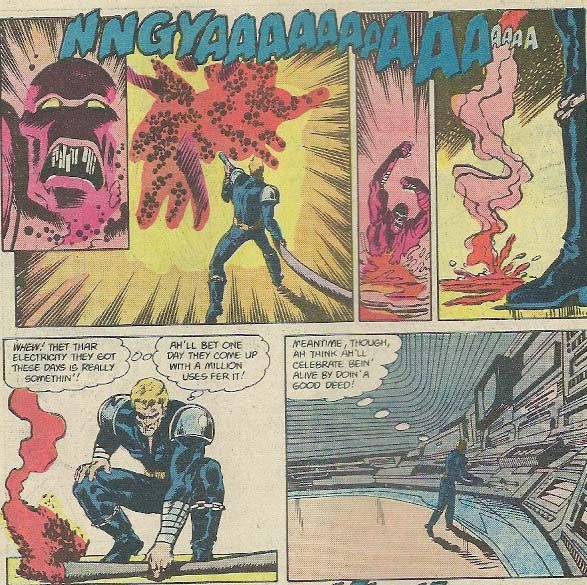 A short time later, Jonah is bidding farewell to the lovely couple and takes off to find Stiletta. As he drives off he notes that life in 1875 was downright serene compared to here and we see residents of the domed community arguing over gardening tools.


Statistics for the Issue
Men Killed by Jonah - 3 thugs in the bar. I don't count any of the cyborgs cuz, well, they're cyborgs.
Running Total - 467 (428 past, 39 future)
Jonah's Injuries - beat up and choked a couple of times.
Timeline - Well, I'll be generous here. It appears that Jonah has been searching for Stiletta for some time, so we'll say that a week has passed prior to this issue and in the issue we do have one day pass. Therefore, since last issue was day 4, let's say that this issue ends on day 12 of Jonah's visit to the future. 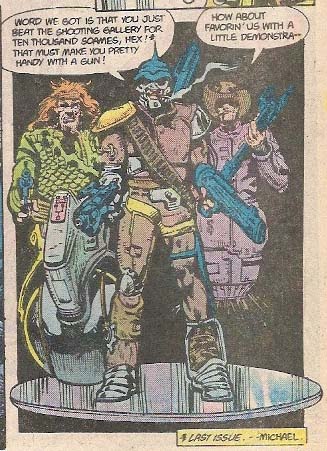 The artwork in this issue was very good (I love Texeira's style) with some weird looking cyborg types both in and out of the domed city. The story had a lot of shooting and what not, but the plot was a little thin especially with the quick dispatch of Dr. Adamant. What do ya want, characterization or action?

Next Issue: Jonah Hex takes on the 1930's Chicago Mob, a lunatic church, a monorail, and a shopping mall. How much crazy can one cowboy handle?
Posted by Dwayne "the canoe guy" at 12:34 PM

I stumbled across this issue in a quarter box near the beginning of my Hex-nuttiness, and was my first taste of the future stuff. Perhaps that's whay, out of all 18 issues, I like this one best. Yes, there are definitey a couple of clunky moments (the huge-ass OFF switch!) but it does contain one of my favorite Hex panels ever: Jonah grinning from ear to ear as Flame grouses about the yuppie clothes he woke up in. It's just so rare to see the man smile.

I remember when I first saw this cover, and even though I was still ambivalent about "Hex", I was excited that they might actually do something irreversible to Jonah.

Alas, he managed to avoid even a minor cybernetic modification inside the issue!

Concerning irreversible changes, how do you feel about the changes to Jonah's face in the current All-Star Western?