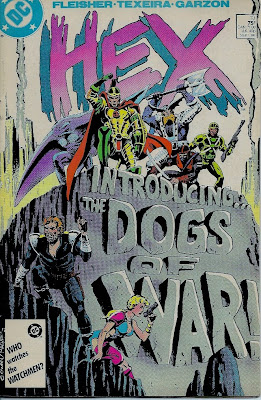 Batman's Bat-plane has just taken a header into the river and the Terminators are destroyed, leaving Jonah Hex on the riverbank about to jump in to rescue Batman. Hex dives in to the murky river and locates the Bat-plane but finds no evidence of Batman's body. He is suddenly attacked by two scuba-diving thugs, knocked unconscious and dragged away underwater.

Three thousand miles away (presumably outside Seattle) the Road Reapers are bearing down on a water convoy and as they start their attack the Reapers (and we as well) are treated to the sight of these fellas!!!! 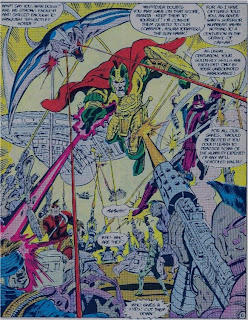 Yeah, it's a giant spacecraft that unloads a flying giant Manta Ray, a Ninja, a Viking, and a Roman Centurion and the spaceship is piloted by Stanley Harris. All of these guys have bullet-proof armor and make short work of the Reapers, especially when the Centurion throws force blasts from his hands, the Manta Ray shoots paralyzing lasers from his eyes, and the Ninja turns into a gigantic Oni (demon). The spaceship lands and the captured Road Reapers are loaded onto the ship and taken away. 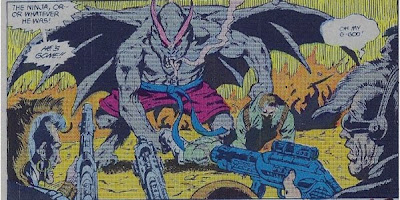 Jonah regains consciousness to find himself in a wooden cage hanging from the ceiling. Two very barbaric looking goons are heating up a large kettle and are talking about cooking Jonah Hex up to make some Hexcellent stew. (hee hee, my joke, not theirs. Hey! I think it's the first time in 4 years I've made that pun). Jonah, not one to be gnawed on, grabs his knife, cuts the rope holding the cage and the entire thing falls on the goons, breaking open and knocking them into the fire.

Jonah makes tracks through what appears to be a sewer system and finally ends up on the bank of the river, free for now.

Back to the giant spaceship with the captured Road Reapers, we find that the ship has arrived at a huge area that appears to be some sort of prison work camp. The Reapers recognize some of the other workers as being from rival gangs and it slowly dawns on them that they are now slaves!

Jonah finally makes it back into town and recovers his motorcycle and ends up back at the Kit Kat Klub to find Stiletta. He grabs both pistols and kicks the door in only to find out that it is now and respectable restaurant. Jonah is fairly confused until he recognizes one of the workers as the referee from the fight. Jonah drags him over to a console with a ton of buttons and Jonah mashes the correct button that turns the restaurant back into the Kit Kat Klub, sliding back a wall to reveal the huge arena. Jonah demands to know where Stiletta is and the referee tells him that Stiletta is probably with Austin and Ingalls, owners of the Klub, and part of the Combine, the group that killed Batman.

That allows us to quickly transition to a meeting of the Combine that is just breaking up. Two men, we can assume Austin and Ingalls, are leaving the building and approach their limo. When they get in they find their limo driver naked and tied up in the back seat and Jonah Hex in the driver's seat. Jonah pulls out a pistol, demanding to know where Stiletta is. One of the men pushes a button that opens up a compartment holding a pistol. The man grabs it and Jonah plugs him square between the eyes. Jonah tromps the gas and takes off in the limo and a bodyguard orders several thugs on cycles to give chase.

Back at the slave camp we see a strange shadowy figure floating within a large building full of video screens. The figure speaks of how slowly the process is going but at least things are moving along, thanks to his Dogs of War. When the light shines on the figure, it appears to be an alien!


Statistics for this Issue
Men Killed by Jonah: Looks to be three. One shot and two burned alive.
Running Total: 477 (428 past, 49 future)
Jonah's Injuries: Beat up and knocked out.
Timeline: Immediately after last issue so not even a day passes during this issue.

Wow. I think right about here is where I started losing interest in this book. Yup, this is the book that jumped the shark for me. I can take Jonah in the future with some of the sci-fi stuff, but the space ships, aliens, and everything else thrown in here, was just too much. Of course, we only have about five more issues left.

The search for Stiletta and the Combine/Conglomerate is a storyline that interests me and I wish we could have stuck along those lines. Texeira's work is still good, but the inking and coloring kind of muddy everything up. Also, Hex was never printed on white Mondo paper so it really suffers from the coloring process.

It's gonna be hard to get through these next issues. I'll just be honest with ya. But I think it will be kind of like a band-aid, I should just rip it off and get the pain over with.

Stunning. Potentially nauseating. It sounds like a bad night in Tijuana.

Man, this is getting convoluted. I never read the futuristic version of Jonah, but I HAVE wondered about it a little. And now, thanks to you, I know that I really don't want to bother.

Hang on guys, in two issues it gets even worse when the art is taken over by Keith Giffen.