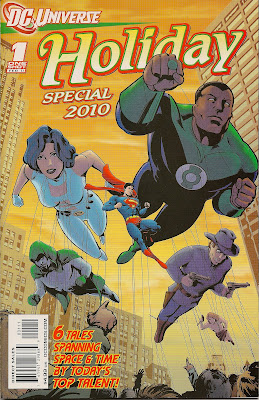 A lonely hilltop in California, 1865. A covered wagon, a campfire, and a father and son. The scarred visage of Jonah Hex hovers over them in the smoke from the fire.

It is the just past midnight, the first day of Chanukah, and Kaleb Kane is talking to his son Avram, who had his Bar Mitzvah just this year. They discuss the gelt coins given during the holiday and then Kaleb produces a small box that was given to him by his father. Avram takes the box and opens it to reveal coins, very ancient coins.

Suddenly, twin gunmen, Barry and Larry Turner, step out of the shadows, demanding all their money. Kaleb complies, telling them where their money is kept. The Turner's ransack the wagon and not being pleased with the amount, kill Kaleb. The Turner's say that anyone on the trail to Sutter's Mill are only there to buy gold so there must be more money somewhere.

Avram dives over the edge of the hill as the Turners unload their shotguns at him.

Much later, Avram climbs back up the hill to find the wagon on fire. He vows to his father to recover the box of coins and lights a small fire as a memorial to his dad. He heads off to Sutter's Mill and comes staggering into town two days later. John Sutter is fetched and they take Avram to the local doctor who is holed up in the saloon. Sutter tells the doc that they have some work for him and the doc grumbles "That ugly bastard with the Confederate jacket just took the last room."

Sutter heads upstairs and knocks on the door of the room. Jonah Hex answers the door, holding a pistol in Sutter's face and we can see a saloon girl on the bed in the background. Sutter tells Hex that the Turner twins have murdered Sutter's cousin and the reward has been doubled. Hex allows the boy into the room and the saloon girl, April, helps the doc treat Avram's wounds.

Two nights later we see the Turners camped at the base of the hill where the robbery took place and they are commenting that the campfire on top of the hill is back, even though they have doused it four nights in a row. It spooks them that the kid comes back every night to relight the fire, but they can never find him.

The following day finds the Turners on top of the hill, pouring water on the campfire, trying to figure out how to catch Avram. Night falls as they continue their search. Later as Hex and the boy ride atop the hill, the campfire blazes up once again. Hex tells the boy that his eyes must be playing tricks. If there is a fire, then someone is nearby, probably the Turners.

Down the hillside the Turners notice the fire blazing once again and as they turn around they are confronted by Jonah Hex himself. 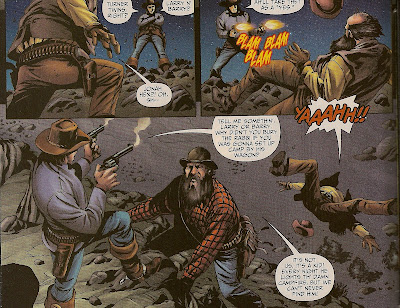 Jonah shoots one of them reaching for his pistol. Jonah asks the other why they didn't bury the rabbi if they were camped by the wagon? The robber says it wasn't them, the kid came back every night to relight the fire. Avram reaches into Turner's saddlebag and retrieves the box of coins as Turner is pleading with Hex to spare his life. Turner points out that he is worth twice as much alive. Hex retorts with... 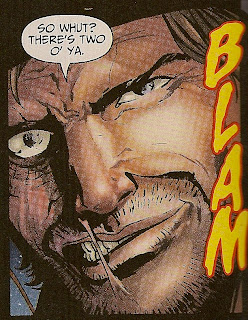 The following morning, the Turners are on a drag sled behind Jonah's horse and Avram is standing next to his father's grave. Hex asks Avram how he kept resetting the fire. The Turners kept hanging around trying to put it out, otherwise it would have been a lot more difficult locating them. Avram says that he was with April and doc the whole time. It must have been a miracle.

Hex replies that there ain't no such thing, just resourceful men. Maybe someone was looking out for Avram. Avram chuckles and agrees that it was "someone". Jonah comments that Avram will make a nice rabbi and hands him a book, a Hebrew prayer book given to him by John Sutter to pass along. As Jonah rides off, Avram reads from the prayer book and the story closes with a dedication to John Albano Sr. and John Albano Jr.

All in all, not a bad story. Not a great story either. But for a first time venture not bad. This takes me back to the last time Jonah was in a Holiday Special, 30 years ago, where we learned of the horrible fate of Roy the Raccoon. It also reminds me of a backup story in Justice League of America where the air in the leaking satellite lasted eight hours instead of one.

As a Jonah Hex story, it suffered because there was very little of Jonah. Of course, it was a story of Avram and Chanukah. I will also admit that the current Jonah Hex series, at times, deals much more with people encountering Hex than depicting Hex's adventures from his point of view. It just seemed to me that Scalphunter, Bat Lash, or El Diablo could have been plugged in to substitute for Jonah in this tale. The other thing that stuck in my craw was the date: 1865.

With the mention of Sutter's Mill, I did some digging, since my historical recall isn't always exact. Sutter's Mill is where gold was discovered in California in 1848 and during the next seven years over 300,000 people flocked to California. Seven years...1865. The only problem is this: Jonah Hex was scarred in 1866. This makes me wonder what the job of an editor and an associate editor at DC comics entails. It sure doesn't include fact checking the continuity of your characters history, that's for sure. Isn't there anyone that picked up the DC History department from Bob Rozakis? Even then, there is the internet option for research, wikipedia .... blogs.. surely there was SOMEONE that has some sort of running timeline for the history of Jonah Hex (cough cough).

Another problem pointed out in the DC Forums, the rabbi has a cross on his grave instead of a Star of David. Again, lazy editors (I'm looking at YOU, Mike Carlin!!!)

As a holiday story, in this case Chanukah, it was nice. Something mysterious happened that couldn't be explained naturally and it tied in with the tradition of the holiday. Compared to the JLA Chanukah story from the 80s, I think it was less tied in to the holiday. Where the JLA story had something that should have lasted only one hour actually lasting eight (a parallel to the oil of the Macabees lasting for eight days instead of one), this story ties to the tradition of lighting the menorah for eight days. There is a slight parallel with the fire lasting eight days despite being put out repeatedly, but I think the point was better made in the JLA story.

Seth, it's nice to see an Albano name in the credits again and I hope you're able to make some more inroads into the business. Keep plugging away. Just remember, you've gotten something published. Me? I'm just carping from the sidelines.

Finally, Renato Arlem was the artist. Wow, the man finally did some WORK!!! There wasn't one photocopy that I could see in these eight pages, a record for that man. However, everyone looked pretty wooden but the work was better than his last attempt at Jonah Hex.

As for the rest of the book? Anthro, art good, story ehhhh. Green Lantern, liked it. Spectre, meh, Superman, why did they bother?  Legion was cute. Not as good as it was 30 years ago.
Posted by Dwayne "the canoe guy" at 10:19 AM

On the error of having Jonah scarred in 1865: I think J&J made a similar mistake in their first "Star-Man" story, where the date for the flashback was implied to be directly after the end of the War, but ol' Jonah's face is already mussed up. Maybe they've gotten loose with the facts on "New Earth".

Either way, it was great to see Seth's name on this piece. I know he's been trying to do a Hex story for years, and hopefully this won't be his last.

It was nice to see Seth's name on a story.

I remember back on the Paper Forums that Seth was asking for some help and I tossed up my offer though he probably didn't see it.

Regarding J&J, they also asked a question about Woodson and the last time we saw him.

For the life of me, I can't understand WHY, given the wide base of fanatics, DC writers & editors wouldn't avail themselves of all this free useless knowledge.