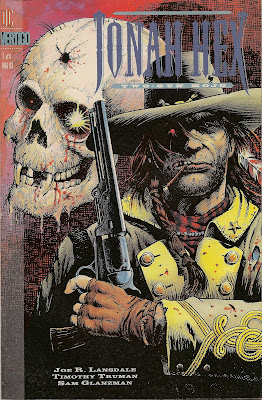 Six and a half years after our last story of Jonah Hex, within the pages of a Vertigo imprint, our fearless bounty hunter surfaces once again. This time, the art is grittier, the dialogue harsher, the townsfolk dumber. All in all, this ain't your father's Jonah Hex. We'll have to decide if that is a good thing or a bad thing. (and it may end up being both!)

Back then Vertigo had no ads, so the inside cover was the title page and credits and the first page was  splash page of Jonah with a piece of scrollwork bearing this quote:

"He was a hero to some, a villain to others, and wherever he rode people spoke his name in whispers." - John Albano

Can we pause here for just a moment while I climb upon my house and throw myself off in disgust? That quote is from Weird Western Tales #26, the first place it appeared in print, and that issue was penned by Michael Fleisher. John Albano, if he wrote those words, never had them appear in a book penned by him. I like the idea of paying tribute to the man who created Jonah Hex, but how about doing it accurately and maybe also paying honor to the man who wrote well over 100 stories about Jonah Hex? What in the hell did Michael Fleisher do to continually get shafted when it comes his contributions regarding Jonah Hex?

The Hex we see on the splash page has long hair in a ponytail, a more ornate Confederate coat and holds his pistol with his pinky extended. Now on to the story.

The tale opens with Jonah being drug through the countryside by three of the most disgusting looking thugs as of yet unveiled in western comics. The comic is narrated by Jonah in a minor tongue-in-cheek style, downplaying the danger he is in. The thugs stop dragging him and then slip a noose around his neck and put him up on his horse. It appears that Jonah killed their sister but Jonah contends that she was trying to rob him. They say that spitting tobacco juice in her eye as she was dying was uncalled for. Jonah admits that his aim was off since he was trying to spit into the bullet hole in her head.

At that instant, a shot rings out, and Jonah's horse is shot straight through the head as we hear cursing from a nearby hill. Another shot and one of the thugs drops dead alongside Jonah's dead horse. Sadly, with Jonah's horse dead, Hex is left dangling from the end of the rope. He barely manages to get a few fingers between the noose and his neck but that isn't helping much.

Just then a raggedy grizzled old man comes walking over the hill, shoots the second thug and as the final thug rides off, the old man takes careful aim and shoots the horse dead. Of course, this whole time Jonah is still dangling from from the noose having barely gotten a couple of fingers between the rope and his neck. The old man cuts Jonah down with a sword.

Jonah takes note that the old man missed one of the horses and the old guy asks if Hex is complaining but Jonah says he's just stating a fact. The old guy says he's been hunting these guys for the bounty. Hex introduces himself and the old man recognizes the name, introduces himself as Slow Go Smith. Smith goes about robbing the cadavers and when Smith offers to split with Hex, he replies that he doesn't pick dead men's pockets. Smith then uses his sword to cut off the heads of the men and stuff them into a sack.

Jonah then mounts the remaining live horse and Smith gets on his (safely hiding in some nearby bushes) and they ride off into the setting sun.

Next day they ride into Mud Creek, Texas where Professor Argon is charging folks 25 cents to get their picture taken with a couple of corpses in coffins. As Hex and Smith ride past one fella asks if they want to buy some post cards of the Price Gang, however the Price boys ain't the ones being photographed, those are the Traywicks. Fella says some guys surprised the Traywicks coming out of the cafe that morning and shot them dead. Jonah lands some tobacco spit on the fella's shoe and asks how many HE shot. The guy confesses that he was taking care of some Chamber of Commerce business when it all went down.

Hex and Smith dismount and walk off but the guy keeps pestering them, trying to sell postcards of the Price boys, what are stuffed and stacked over at the livery. Hex says he wouldn't want to buy cards with blood on them. The Commerce guy replies "What blood?" and Hex states "Yorn, you don't get away from me." The guy commences to caterwalling but another townsfolk explains that he was just threatened by Jonah Hex "his own damn self. He's killed more men than Hell has souls."

Smith and Hex walk into the Sheriff's office and deliver the bag of heads in order to collect the bounty on the Traywick's. Turns out the men the townsfolk shot were in the wrong place at the wrong time. The Sheriff asks how Jonah got his scar. The reply?

Sheriff explains that since he already paid out the bounty it'll be a couple of days until he can get some more reward money. That means Hex and Smith are gonna have to hang around town for a spell. As they head for the saloon they pass a discarded flyer for Doc "Cross" Williams Wagon of Miracles.

In the saloon the bartender asks Jonah how he got his scar. The reply? 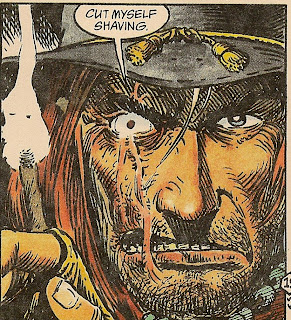 A couple of locals are playing cards and one dumps over his beer and calls the Indian barmaid over to clean it up. He grabs her and tells her to use her tongue and forces her face to the table. Hex busts a bottle across the local's head and when the other one draws on him, Jonah kicks him to the ground, places a boot on his head and forces HIM to lick the manure off his buddy's boots.

The bartender starts to pull a rifle and Smith grabs his pistol and throws it upside the barkeep's head. Hex holds a pistol to the local's head until the boots are clean, then Hex asks Smith why he threw the pistol. Smith says he had a better chance of hitting what he was aiming at. Hex runs the locals off and he and Smith stay in the saloon most of the night.

Very much later they head for the hotel and ask for rooms. The hotel manager states that they only have one available. Hex and Smith eye each other and decide to share the bed.

Of course, later that night Hex learns that Smith is a horrendous snorer and Smith learns that Hex won't put up with it. Smith finds himself out in the hall and eventually ends up at the livery. The livery owner says he'll charge Smith the same rate as a horse and then they walk past the bodies of the Price boys. The owner says that since Smith saw the bodies, he'll have to charge him a nickel as well. Smith replies to put it on Hex's tab.

Jonah is back in the room trying to fall back asleep but Smith has some troubles of his own. He's awakened by someone walking towards him in the stables. He draws his gun and shoots the stranger five times point blank, but the man keeps drawing closer.

Hex hears the shots and realizes they are coming from the livery. More shots are fired and Hex climbs out the window and drops to the ground to investigate.

Back at the stable, Smith runs out of bullets and we see a rotting bullet-riddled body of the Price boy pull a pistol and shoot Smith dead. 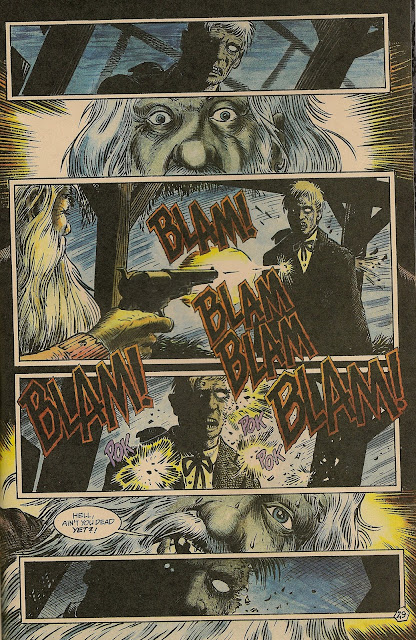 Statistics for this Issue
Men killed by Jonah - 0
Running Total - 487 (432 past, 55 future)
Jonah's injuries - Drug behind horses and hung by the neck
Timeline - There ain't no telling. This story does cover two days and two nights, but this is a totally different look for Hex so we can't place it among the other books based on his outfit.

Gothic Horror and Westerns seem like they belong together. The time was full of blood and guts and superstition with folks often not asking questions, just shooting the hell out of stuff. So I can see how they would make a good match. Is it good here? Well, so far.

This West is a lot grittier, a lot mangier, and a lot less welcoming than anything we've seen before. Heck, the world of 2050 was a lot more appealing to me and they had giant grasshoppers! The story is told from Hex's perspective, with the captioning being Hex relating the tale, something that wasn't done a lot in early nineties but is so much in vogue now, with a colored caption and small symbol indicating who is 'talking'.

At this point in time, Lansdale had some novels under his belt, but this was his first foray into comic books. I hadn't seen any of Truman's work but I recognized Glanzman from the Haunted Tank and other war books that he had done. His sketchy look mad everything have a very gritty feel and I think worked quite well. Truman's populace of the Old West was quite often filled with horrible ugly people that looked like the villains in a Disney film (only worse) or a Dick Tracy strip.

All in all, I did enjoy the book and looked forward to the rest. How does THAT idea play out? Pretty well, but you know, comic companies quite often go back to the same well too many times.

And, oddly enough, I think my family is related to the Price boys. (looking at the time stamp of this post, I started this back on Oct 10th of 2010. Longest I ever took for a review.)

Next Issue: Zombies are all too real (and I'm too lazy to find the next issue to write a snappy teaser.)
Posted by Dwayne "the canoe guy" at 11:00 PM

I have to admit that I simply loved this particular tale. It was gritty, and scary and funny and horrible all at once. While I have both this and the Riders of the Worm, I liked Two-Gun Mojo much more.

I recall reading once that Fleisher was on the outs with the big guys at DC, but don't know why.

I know Fleisher wrote Warlord for a good chunk of time, some good and some bad.

Been waiting for you to get to this one, too!

I have been a long term fan of Joe
R Lansdale for a very long time,
so when I heard he had written
"Two Gun Mojo", it was a instant
purchase.
The miniseries was classic JRL.

Regrettably, I lent it out and
never saw it again.

Maybe it will be reprinted in the
future....