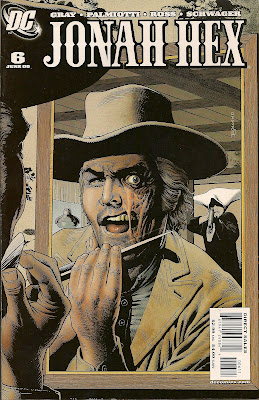 The Plague of Salvation - A man is dragging himself across the desert sands. He is covered in sores. A shadow falls across him as a rider comes upon him and we see about seven more bodies in the sand behind the man, all of them having drug themselves across the desert.

Jonah puts the man onto his horse and they both ride to the nearest town, a small outfit in the middle of nowhere, ringed with a wire fence and flying a flag. As Hex nears the town armed guards confront him and he asks if they have any medicine, it appears that his passenger has the Plague. The guards inspect the man and find that he is dead. They are also curious how Jonah got past the Apache that have cut off the town from civilization. Hex replies, "Quietly".

As Jonah rides on into town we overhear a hushed conversation between two nuns, Sister Agatha (played by Linda Hunt) and Sister Evelyn. Agatha tasks Evelyn with 'washing up' and bringing the dead man back so they can inspect him.

Hex continues on into town, riding past a flagpole flying a blue flag and a red flag on the ground. Hex ends up at the saloon where he is informed by the bartender (played by Geoffrey Lewis)that Salvation is a dry town. Jonah inquires about the flags and learns that the town is beset by Apache raids, blue flag means it's all quiet, red means trouble is coming. Jonah asks for a room where he can wash up and Lilly, the bar girl, offers to take him upstairs. 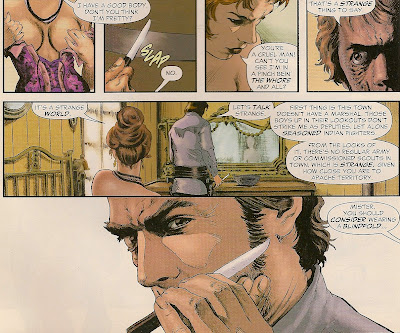 ..and is interrupted by a NUN WITH A GUN!!! Evelyn shows up with a shotgun and tells Lilly to clear out. Lilly leaves but stays right outside the door, eavesdropping. She learns that Evelyn is warning Hex to leave town and that Hex and Evelyn actually know each other from before Jonah's scarring. Jonah mentions that seventeen years have gone by but Evelyn interrupts him again, saying that HER scars are not as evident, but she has them all the same.

Lilly has now made tracks out of the saloon and over to the other nuns who have gathered in the street. The nuns round up a few men and they all head over to the saloon and up to the room. Evelyn is warning Jonah to leave Salvation, the town is run by Sister Agatha and he MUST get away. Just then, Sister Sarah bursts in and tells Evelyn that lying is a sin, worse than trying to bed Jonah for her own pleasure (this according to Lilly). One of the men punches Jonah and he retaliates, tempers flare and guns are raised. Evelyn jumps in front of Jonah and confesses that she tried to bed Jonah but he refused, he is no sinner. Sarah states that Agatha will decide that.

Shortly thereafter, we see Jonah and Evelyn bound and gagged in the middle of the street. They are tied to a large pole atop a huge bundle of wood and it appears that they will be burned at the stake. The townsfolk gather around for the burning and Sister Agatha shows up carrying a torch and a small child. Several dozen children fall into step behind her.

Trial by Fire - Agatha approaches the stake and tells Jonah that it is heathens like him that try to corrupt the children, she tells the kids to gaze upon the scarred face of evil and then she whispers under her breath "Don't ever think I forgot you, Jonah Hex."

The townsfolk have started throwing rocks and Agatha is gloating about destroying the wicked,, however, we are privy to seeing over a dozen Apache sneak into town and make their way right up to where the burning will take place.

What happens next is one of the most cinematic sequences in comic book history and rather than destroy it with words, I'll let the pictures speak for themselves... 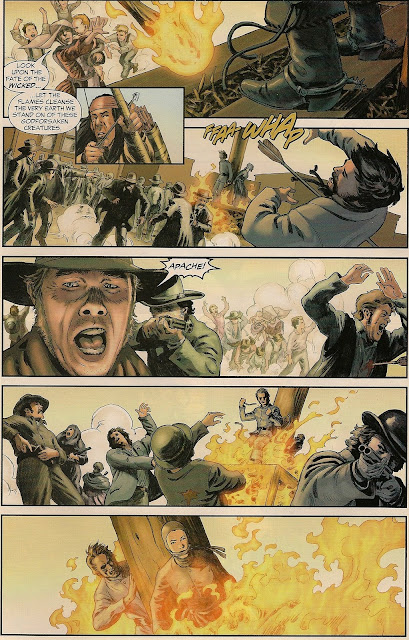 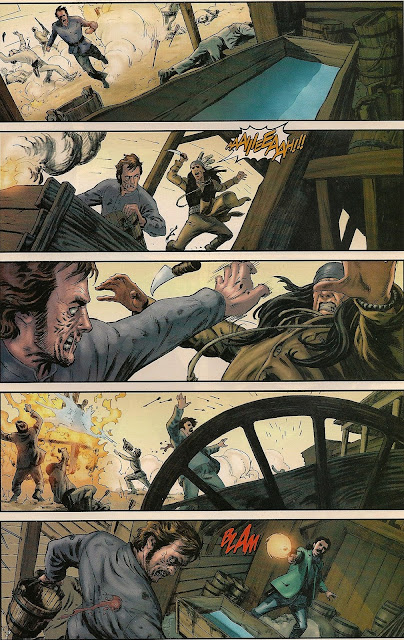 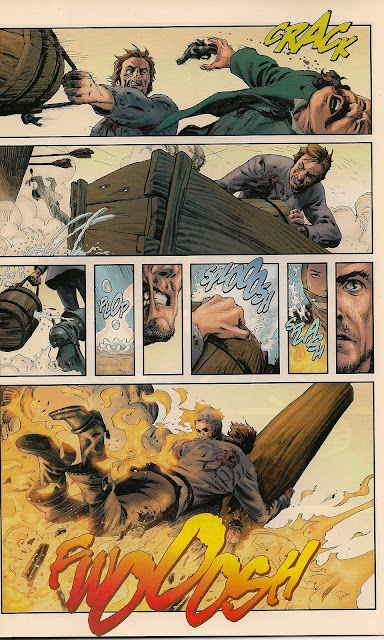 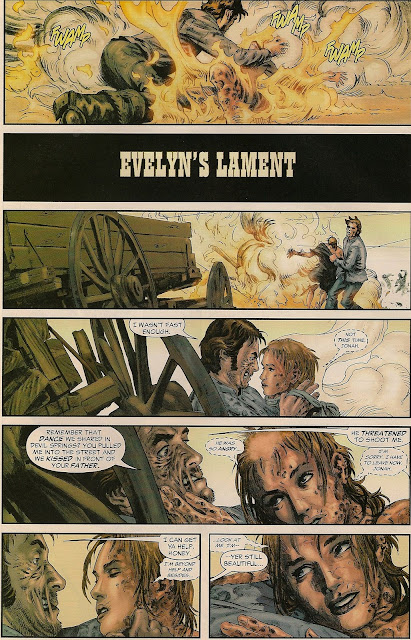 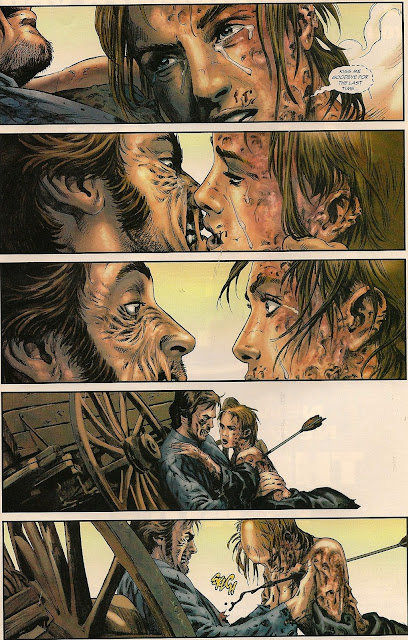 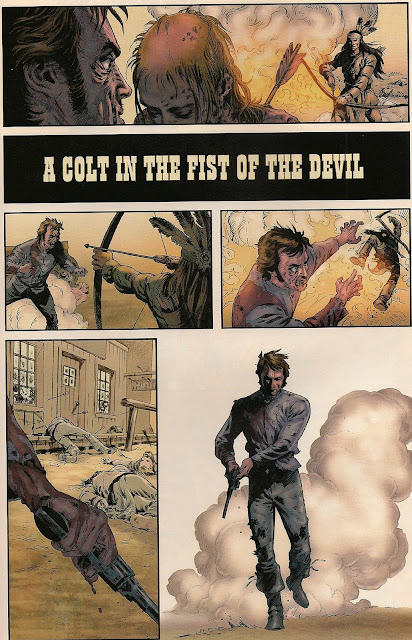 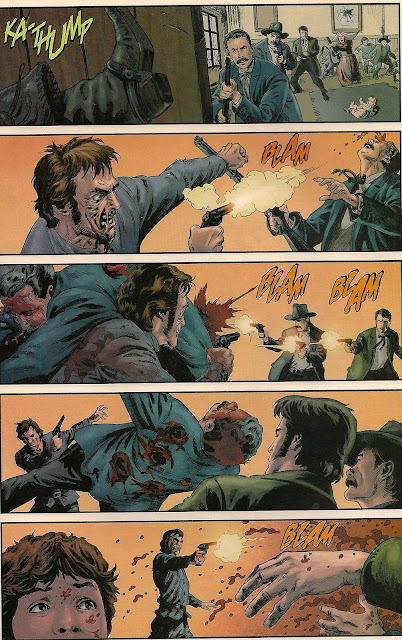 Hex confronts Agatha, saying she got lucky in Juarez and now she is hiding behind children. Agatha states that the Lord is watching over her now but Hex slaps her to the ground, picks her up and throws her out the window and into the street. Hex exits the building with several children attacking him. He tells the townsfolk to get their brats off of him and then he walks over to Agatha and uses his boot to grind her face into the broken glass in the street.

Hex pulls out a wanted poster for Mary B. Norton and addresses the Apache, telling them they have fought well this day, but this place is poisoned, they should take their dead and go home. He then turns to the town and tells them to let the Apache go or he will kill them all. Agatha rears up, pulls a knife and buries it in Jonah's right thigh and she takes off running. Hex pulls the knife out and draws his pistol but a shot rings out and Agatha falls dead in the street. Lilly is standing there with a smoking shotgun.

Hex points to Agatha's body and says "Put that in a cheap box." Then he picks up the burned body of Evelyn and says.... 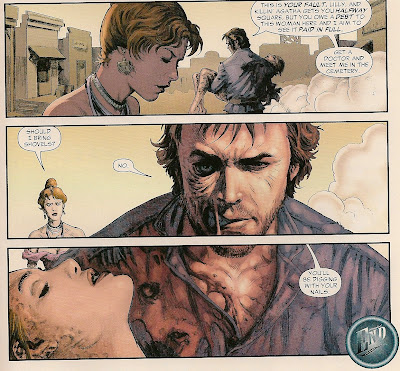 Statistics for this Issue
Men Killed by Jonah - 4

This has to be one of my favorite stories and I'm afraid that I won't be able to properly convey the awe that I have for this issue. Everything in this is pitch perfect.

The burning sequence shown above so wonderfully portrays the hysteria and the confusion at the burning, how Hex works at getting the fire put out, getting shot in the shoulder, the bullet holes in the trough, the holes in the bucket, each drop of water hitting the dirt before it can douse the flames and finally Jonah realizing that Evelyn will die. Finally, there is that horrible agony of the fatally burned Evelyn, being held in Jonah's arms, asking for nothing more than one last kiss and then..THEN.. to have that denied by the Apache arrow that runs her through and lodges in Hex as well. I was almost in tears.

And the savagery of Hex afterwards. He doesn't scream her name, he doesn't vow to avenge her. He picks up and throws the Apache in to the flames, shoots a man and then hurls the bullet riddled corpse at more attackers, beats the hell out of Agatha and grinds her face into the broken glass in the dirt.

Finally...FINALLY, he hands out the best justice to Lilly as we know he will force her to dig Evelyn's grave with her bare hands.

Slap a Bolland cover on that and we are talking perfection folks (Why couldn't they have done THIS issue for the Jonah Hex movie? WHHHHHHYYYYYYYYY?!?!?!?!?!?!?) This issue is worth easily triple the $2.99 cover price.

Man, I get chills just TALKING about this book. I better stop now, I'm getting light headed.

Next Issue - A Wedding, a thunderstorm, and then all Hell breaks loose.