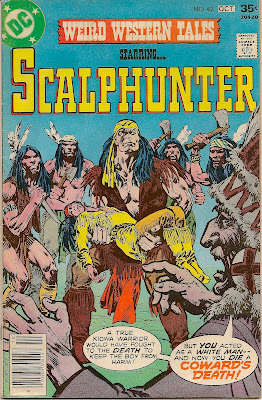 Cantwell, Missouri, 1865. We last saw the town of Cantwell two issues ago, ya know, back in 1862.  Now, three years later, six men on horseback ride into town. They pull up in front of the bank and tell Brandy to keep watch. They go inside and rob the bank and the patrons, gunning down one old farmer. The bandana slips off of Red's face and a woman recognizes him as the younger brother of Sheriff Brett Harley.

The robbers are left with no choice but to kill the teller and the other three patrons. They run from the bank, mount up and ride off into the growing snowstorm. 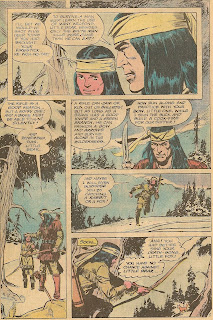 Meanwhile in the snowy hills above town, Ke-Woh-No-Tay is teaching Little Bear how to hunt for food using only a bow and arrow. Little Bear wishes that Scalphunter had brought his rifle but gets a lesson on Kiowa preparedness instead. While Scalphunter cleans the deer, Little Bear chases down a fox and while trailing the fox, he comes to a cave where Bart and his gang of robbers are holed up. The robbers spot him and give chase, thinking that he heard something and can snitch on them.

Little Bear is running away but is soon surrounded by the six men on horseback. Little Bear panics and fires an arrow at Pete, who in turn get angry and shoots Little Bear. The shots alert Scalphunter and he arrives on a hillside overlooking the scene. As he draws back his bow, the robbers fire on him, grazing his head and the men ride off.

Hours later, Scalphunter comes to and rushes to Little Bear. He picks him up and sings his Death Song. Much later Scalphunter walks into the village with the body of Little Bear. He tells the story and Little Bear's mother is distraught. Another brave, Sixteen Hands Horse berates Ke-Woh-No-Tay as being a coward, afraid of the white man. Scalphunter responds..

Sixteen Hands pulls a tomahawk and rushes Scalphunter but is quickly cooled off by being thrown into the lake. The Chief finally shows up to see the ruckus and tells Scalphunter that there is only one way to remove the dishonor that he has brought upon himself. Scalpy must track down these six men and count coup with only a tomahawk and a knife and he has only two weeks (the Chief states that the moon is hiding and he has until the moon is full. That's two weeks, isn't it?) to complete this mission, otherwise, Scalphunter will die at the stake in place of the killers of Little Bear.

Five days later, the robbers are riding through a narrow pass and Scalphunter is hiding in the snow above them. Brandy, the alcoholic of the bunch, falls behind to take a snort on his flask and it's true that liquor will kill ya.... 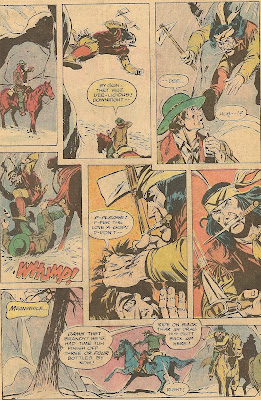 After a while, one of the men rides back to see Scalphunter holding up Brandy's bloody dripping scalp. Scalpy rushes him and plunges his knife into the man's ribs.

Up above, in the hills, Sixteen Hands is taking aim with his rifle in order to kill Scalphunter. Just then a grizzly bear (Seemingly possessed, as indicated by the red glowing eyes) rushes Sixteen Hands. Scalphunter hears the screams and realizes that Sixteen Hands is in danger. He grabs a rope from the dead man's horse and lasso's an outcrop and scales the cliff. He then rushes into the arms of Wa-Noh-Nah (the bear) and finally vanquishes the beast. 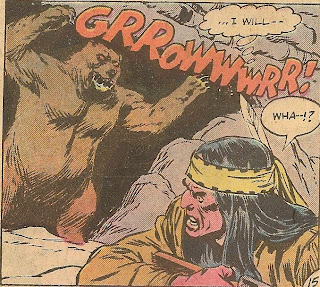 As Scalphunter turns to Sixteen Hands and demands to know why HE is there, the two Indians suddenly find themselves set upon by the four remaining robbers....

I liked this book a lot, mainly because of the interior inking of George Evans. Evans is a gritty inker and it really makes the book shine. We also have the beginning of an ongoing story and I'm happy to see some continuity (even though it is three years off the mark...maybe).

Also, this is the first time that we have seen Scalphunter interacting with other Indians and it appears that he even is a member of a tribe. In past issues we have seen how Brain is not accepted by the White men but in this issue we see how he isn't fully accepted by his own tribe. The last we saw of the Kiowa tribe was back in issue #39 where a large bunch of them were killed. I liked the cover. At first I thought it was Alfredo Alcala, but then I saw the Weiss signature.

And this brings up one other thing. Our hero has four names; Scalphunter, Brian Savage, Ke-Woh-No-Tay, He Who is Less Than Human. In the book, he is rarely referred to as Scalphunter or as Brian Savage. The Indians always call him Ke-Woh-No-Tay (which they never translate as He Who is Less Than Human) but refer to each other as their translated names (Sixteen Hands Horse, Little Bear). So, with all that information, how shall I denote our hero? I would like to stay consistent (and I have tried three of the four names to see how they 'feel')

Next Issue: Things get really really bloody and there is a transfer of plumage!